Confronting Emmett Till in the Whitney Biennial

We really can't get into a situation in which races own images. 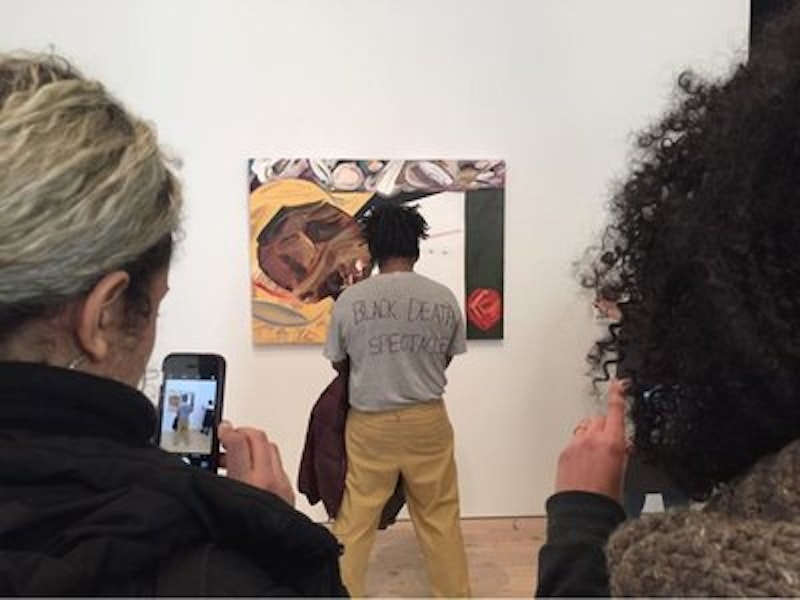 When the Whitney Biennial opened a couple of weeks ago, it got good reviews, which is a bit surprising because the Biennial often makes critics bilious. (Perhaps the model is the savaging of the notorious, highly politicized 1993 Biennial by Arthur Danto in The Nation.) In a way, the implicit charge of the curators is impossible to fulfill, and there’s no escaping that the show is taken to be some sort of definitive representation of the arts in America now. By definition that's an arena of contestation, wide open to critical quibbling and serious protest.

Whatever its merits, reception of the show was swamped almost immediately by the response to a single painting, Dana Schutz's "Open Casket," which depicts the body of Emmett Till, who was lynched in Mississippi in 1955 at the age of 14. Till's mother insisted on an open casket, and the picture was seared into American consciousness, one of the images that helped set off the civil rights movement of the 1960s, that helped bring Freedom Riders to the Deep South, for example.

Schutz's style as a painter is eclectic, in a "postmodern" vein; her output is partly a commentary on the history of painting. But it’s more than ironic, and at her best she achieves great emotional presence. That too might be thought of as typical of this moment; all the tools of appropriation and distance typical of postmodern art are recovered as emotional and painterly/aesthetic vocabularies, and the half-forgotten capacities of painting and sculpture are re-deployed. This includes a revival of the genre of history painting. Schutz's approach to it is expressionist, but refers also to surrealism; the image is abstracted, we might say, even further distorted, which both attenuates and intensifies the horror, in different respects. It is made of paint, but it is a face-to-face confrontation.

Judging by images of her on the net, Dana Schutz is a white woman. Parker Bright, a black artist from Chicago, mounted a protest in front of the painting, a sort of “stand-in,” partly blocking the view, and wearing a t-shirt saying "BLACK DEATH SPECTACLE." The writer Hannah Black circulated a letter calling for the painting not only to be removed, but also destroyed. A photograph of Schutz circulated on social media, originating with an artist named Rafia Santana, over which was scrawled “BURN THiS SHiT, BiTCH.” People accused Schutz of profiting from the spectacle of a black, tortured body, and of presenting it as entertainment for white people.

I don't want to again bemoan the present pervasive impulse to try to achieve social justice by editing expression. To my way of thinking, if Schutz has free expression, so does Bright, and so do the people attacking Schutz on social media, though I think the attacks were sometimes far too extreme. Were I Schutz, I’d feel endangered. And I’ll squarely reject the iconoclastic impulse here, or the demand to destroy the painting, for a number of reasons.

But art is not necessarily mere entertainment. The painting is, in its own way, emotionally harrowing; it does not make Till's murder glamorous or beautiful. We don’t know—or at least I don’t—what was in Schutz's heart or who she was talking to as she made that painting. But it’s not an entertainment; the response is more intense and important than that, I believe.

The murder of Emmett Till is part of African-American history. It’s also part of white American history. White people were there at that lynching. If we’re going to cavalierly speak of races as agents, then we did it. Black people keep the memory of Emmett Till alive, and keep alive his promise and the outrage of his killing. They’re almost charged with cherishing the memory of Emmett Till—the hopeful-looking kid, and then that face distorted by torture—as an emblem of black oppression in America. But white people need to confront it, over and over, as a sign of what we did and what we are, and of what we’re still doing, in mass incarceration, police shootings, and many other ways.

We really can't get into a situation in which races own images, in which there are some subject matters that each of us is disqualified from confronting before we even start. People—particularly artists, but all of us—need to reflect on how and why we're drawn to certain subject matters. People like Schutz (and me, for that matter) had better listen to the sort of people we’re writing about or depicting, and to the sorts of people our sorts of people have oppressed. But we need to do that precisely because we need to confront the oppressor in ourselves and one another; we need to reflect on our own history as well as Parker Bright's.

The histories are intertwined or are a single history variously experienced: white people are created as white by it and in it, and black people as black. We white people, too, need “knowledge of self,” but one source of that is the trying to hear other voices, see other images, and create them for ourselves, reconstrue or re-confront them, and in the process try to remake ourselves.

American race, in particular, is constructed as a duality, a black and white thing, a sort of yin-yang. There is no possibility of understanding the oppressed without understanding the oppressor, and vice versa. There is no possibility of any of us, no matter where we might stand on the spectrum of American race, knowing ourselves and our culture without trying to know all of us. Our art can be and ought to be, and sometimes is, not merely an entertainment, not merely a marketplace, but also our zone of self-reflection, our place to confront ourselves.

—Crispin Sartwell is the author of Act Like You Know: African-American Autobiography and White Identity.