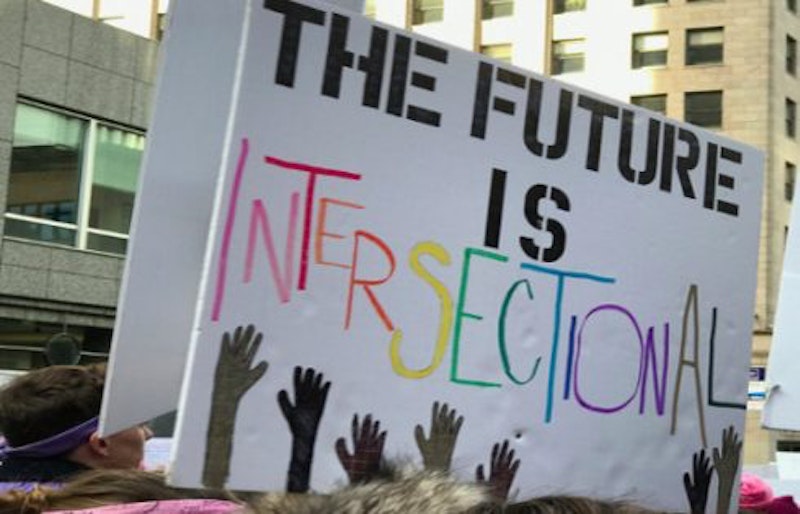 It's not surprising that those within the intersectionality movement are obsessed with allies. Marginalized groups must build alliances to advance political agendas. What's striking is the intersectionality approach, which often appears to be an extended lecture directed at current and potential allies.

Anyone identified as privileged who’s thinking of signing up for the intersectionality struggle might feel as if they’re trying to get past the gatekeepers to an exclusive club with a long waiting list. The odd, flawed strategy involves first congratulating you for being a decent human being, which places you on the right side of history. Yes, you’re a morally superior individual compared to the deplorables, but don't rush to congratulate yourself yet because you've got a long road ahead of you.

This involves rigorous programs on how to be the best ally, because you don't determine that—they do. The 12-point plan that recently went up on Everyday Feminism’s a good example. It's addressed to men who want to be a part of elite third-wave feminism, but are naive enough to think they can just volunteer their time and energy and do their best.

The article starts with a caveat on “toxic masculinity,” which the writer, Lisa O’Neill, explains has always been “there” under the surface, but which you, in your pre-enlightened state, probably never noticed. Then it's on to your male guilt: “You might’ve even experienced some degree of guilt or shame for being a man when some men are acting in such vile, repugnant ways and making decisions for women without actually listening to women.”

O’Neill instructs you to do the following: educate yourself, don't take up too much space (“especially true if you encounter a woman alone”), do your homework, think about the things you make, find other men doing this work and listen to them, believe that “no means no,” don't police women's bodies, “look hard at your own shit,” and commit to a lifetime of continuing education.

The reprimanding tone isn't confined to men. Women of color tell white women how to be allies with black feminists. They must listen more, consider their privilege, and educate their fellow white feminists that feminism isn't a “white” thing. One intersectionality primer, written by a woman of color, instructs white women, ”Do not dispute or try to argue with us.” Also: “Your absolute, most important role as a white feminist ally is to collect the fucking trash. Call out the white feminist community on their racism, tell them to shut the fuck up and sit their asses down and listen to us.”

Left-leaning political philosophies are strong on emotion and weak on strategy, and intersectionality is no exception. It's as if intersectionality advocates decided that allies are essential but then spent no time arriving at how to achieve that goal. Compare this approach with international diplomacy, the goal of which is also to maintain current allies and produce new ones. Imagine another nation trying to curry America’s favor by first producing a lengthy set of demands that must be met to begin the process.

Building alliances is an intricate, delicate process requiring a strategically-sound, concerted effort. Confrontation is avoided whenever possible. Telling potential allies that their primary job is to “collect the fucking trash” might make you feel good, but it's just shooting yourself in the foot. There's rarely any encouraging language in the intersectionality rhetoric on allies. Emphasizing shame and guilt doesn't attract allies, outside of the ones who enjoy being punching bags. All the marginalized groups were going to band together and, with the support of white liberals, defeat their Antichrist, Donald Trump, last November, but intersectionality couldn't defeat one of the weakest candidates ever. Maybe it's time they found a new strategy and stopped acting like they’re the Navy SEALS and can expect prospective members to do just about anything to join their cause.