A night with Penn and Teller in Las Vegas. 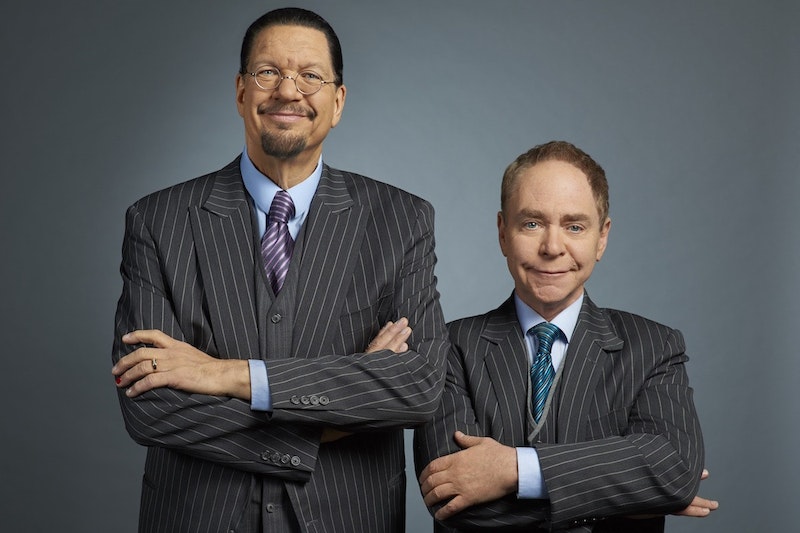 You know these guys, even if you think you don’t: Comic magicians Penn & Teller have been a subliminal pop-culture presence since the early-1980s. Besides cameos on The Simpsons and too many late-night talk shows and other pop culture waystations to count, they’re prolific and multi-talented makers of documentaries, books, podcasts, and theatrical shows, sometimes together, sometimes on their own. And their magic show is one of the best Las Vegas entertainment values you could ask for.

The two have been performing their personality-driven magic act at the Rio Hotel & Casino in Las Vegas, a mile or so west of The Strip, since 2001, with time off for rest and tours. I first saw them in 2010 and 2011, choosing different sides of the theater to sit on each occasion, and picked up a couple of intriguing hints about their opening trick—then returned this November to find the show had completely changed.

Well, not every part. Just as before, we found our seats in the auditorium to amusing patter from jazz pianist Mike Jones and a surprising but familiar figure slapping the stand-up bass. The audience is still invited up on stage by Jones, cooing “bring a friend, a loved one up on stage, and share the excitement” of inspecting a glass bottle suspended above the stage. Previously the audience had been invited up to inspect a (empty?) wooden box, a novel experience.

Penn, 6’6”, is no longer hefty, while Teller, the silent partner and senior partner by seven years, is a hard-to-believe 71. When they stand together on stage Teller looks tiny, but he’s not actually short (5’9”) and although Teller employs silence as performance shtick, he’s no mute—he’s even spoken on stage with the audience unaware.

Penn’s onstage patter and the show’s tricks are lightly embedded with quasi-libertarian ideas about privacy, personal freedom, and skepticism that the two performers share (as did their long-running Showtime series Bullshit!, which took on mandatory recycling and the War on Drugs, among other semi-sacred cows). Penn, a sort of hedonist teetotaler, has written a couple of books on his humanistic brand of atheism, and his tolerance and good will comes through both in print and on stage.

The duo prides themselves on a constantly evolving show. Its current iteration is surprisingly child-friendly, considering Penn’s ribald persona. He invited on stage a girl who stood transfixed as he explained the famous trick of interlocking steel rings—or did he? Unlike more grandiose magicians, Penn & Teller never pretend they’re truly practicing magic.

They had to cancel some shows recently after Teller underwent back surgery. Which may have explained why there were no Houdini-type escapes from water tanks or similar acrobatics from Teller, the stuntman of the duo. Instead the emphasis was on whimsy and stunning sleight of hand, with Teller conjuring coins and goldfish from thin air.

The showstopper involved five audience members and some mind-reading that will ruin your remaining faith in foolproof password security. One sweaty moment occurred during a botched rendition of a new trick with Penn memorizing playing cards. An unfortunate volunteer treated the task facetiously, causing Penn’s patter to break out into true exasperation. The show concluded on a sweeter note with a trick featuring a “baby elephant.”

I missed a few of the older bits, like a memorization stunt spiced up with a pneumatic nail gun (Penn firing it affectionately into Teller’s crotch), and the “burning” and vanishing of an American flag. The show’s turn for the mild and away from edginess may disappoint some. Another disappointment: Penn and Teller weren’t together on stage often enough during the roughly 90-minute show, mostly sticking to their own bits. I would’ve liked more interaction.

Still, they seem to genuinely appreciate the audience coming out to see them, and hang around for chat and selfies after almost every show. So if you haven’t seen them, or even if you have, go see Penn & Teller at The Rio casino or out on tour. Even if it’s a different show by now, it will always be among the best entertainment deals around, and Teller’s surgery is a reminder that it won't last forever.