An Open Letter to a Comic Book Store Owner

Why don’t you want my money? 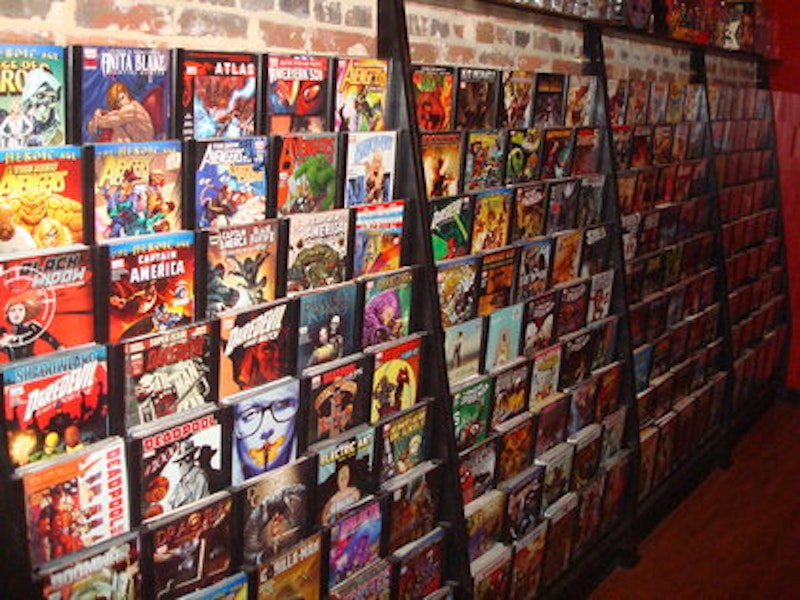 Dear Sir or Madam: I have some money. Not a lot of money, mind you, but some. Certainly I’m no miser, and am happy to stimulate the local and national economies now and again, but it’s becoming increasingly clear that you—the owner of a comic book store somewhere within greater Baltimore County—do not want any of this hard-earned bread I would like to spend in your place of business.

Let’s put aside the thin gruel of stock on your “just arrived” shelves and my intense dislike for the majority of modern comic books. It’s hardly your fault that I find today’s offerings too pristine and blinding, that my personal Golden Age of funny books begins—Savage Dragon, Love & Rockets, and a few others aside—in 1983 and ends somewhere around 1992; that’s immaterial.

Instead, let’s consider the more recent past, namely my first visit to your store, when I spent 30 or 45 minutes in search of succor and was left wanting. Sure, the “new arrivals” sucked then, but—then as now—your stock of graphic novels and collections were enticing. But your back issues were off-limits. Holy shit, were there back issues! So many dozens of long boxes, stacked seven or eight high. I was in fanboy Heaven, yes sir, right up until the moment I saw the sign directing customers to ask a clerk for assistance. Whereupon it became clear that the clerks were unwilling, when asked, to assist, though a customer could write down the names of the titles desired, and receive a call at whatever point in time the employees got around to retrieving them.

This was three months ago. I reasoned then that perhaps your store was undergoing some sort of massive reorganization; I gave you the benefit of the doubt, but three months hence, very little had changed. When I arrived the second time, four young men were sitting around, watching some animated Justice League film. I asked if the “assistance” policy remained in place, and was assured it was. And circumstances were slightly more favorable, but only slightly, because the miscellaneous “A” back editions were now available for perusal, plus a random smattering of other back issues.

There were some vintage Ambush Bugs at hand that looked too stupid to even consider, some Avengers glossies from several years after I’d given up on that title, and a ton of other dross. I went in for Avengers West Coast #100—the final issue, which I’d never been able to buy, but the minor excitement this elicited did little to quell my ire at not being allowed to browse those towering stacks. Checkmate? Ostrander-eraSuicide Squad? Morrison-era Doom Patrol? Giffen/Bierbaum-era Legion of Super Heroes? Those were my Shangri-la. My collections were formidable, but there were gaps I’d sought to fill for years—and money I was willing to spend to fill those gaps—while your employees solemnly watched Batman and Superman trade lame quips. I leafed idly through a nearly pile of unfiled old Marvels from the era of my youth and was horrified by the fact that a) no one could be bothered to file them—the store wasn’t busy, I was the only customer—and that b) they were mostly stuck together, which meant that no one had been bothered enough to separate trash from treasure. It all felt of a piece with the sad state of the comic book economy these days.

Look, I know that you don’t know me. I know that I don’t know your business, or your struggle, or how you stay afloat in a time when kids would rather spend their allowances on iTunes cards and video games than the zillion iterations of the X-Men that exist—that’s a franchise I’m not even trying to catch up on now. I don’t want to tell you how to run your store. But I’m a dude in his late 30s with income I’m willing to dispose of to rekindle the joy that edgy, mass-market comics brought me in my teens and early 20s, and I imagine that there are a lot of us. So riddle me this: why don’t you want our money?