2016 Was a First World Problem

Hysterical regressions into childhood as our cultural consciousness is decimated. 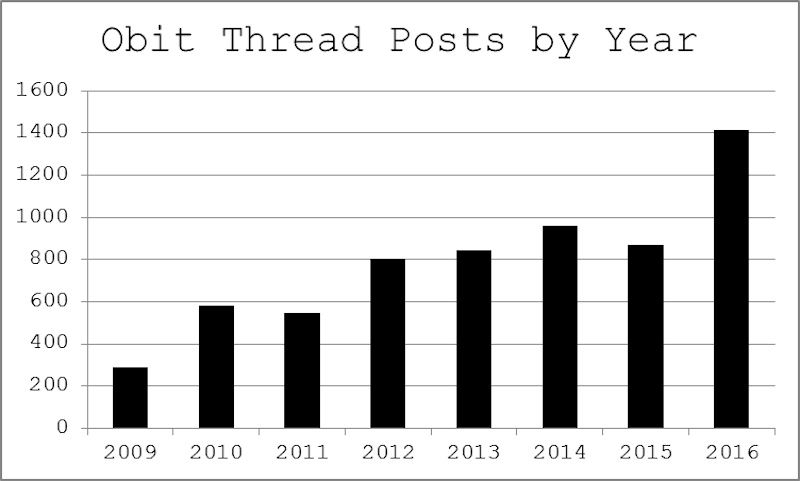 Everyone is white-knuckling the final four days of 2016. Who will be next? As always, the famous deaths came in waves this year, not in threes but dozens. By the end of January, people were already exasperated by the death march that began with Bowie, who was quickly joined by Glenn Frey, Alan Rickman, and Abe Vigoda, the classic example of a celebrity that everybody thought was already dead. Bowie’s grand exit, his final piece of performance art paired with a remarkable album and exquisite timing, has yet to be matched in its disorienting and poetic effect. Prince was a close second, but that was just bad math, a horrible accident and tragic timing. But even if that detox doctor reached Paisley Park in time to have a sit down with the Purple One, the guy was tempting death for years unbeknownst to almost everyone. Medium, of all websites, had two very good pieces on the irritating collective braying about 2016 being “the literal worst.” Judy Anne pointed out that most of the artists who died relatively young this year were addicts, including George Michael and Carrie Fisher. She starts off by saying “I have a very unpopular opinion,” but I think most people realize that, yes, famous people will continue to die in 2017, 2018, 2019, and so on.

It’s not all in your head: though the BBC says the hysteria is overstated, there was a huge spike in obits at the beginning of the year that skewed our perception. Suddenly people in their 80s and 90s dying were thrown in the #Because2016 bucket. Fidel Castro, Elie Wiesel, John Glenn, Merle Haggard, Harper Lee, and George Martin had to go sometime! Though they lived full lives, look at those names: these are immense cultural icons, and as Gene Wilder, Florence Henderson, Leonard Cohen, Muhammad Ali, and Edward Albee joined them, the West responded with this knee-jerk nostalgic regression, wailing that their childhoods were being decimated. Dude, are you even able to adult these days? Your childhood is over. History is dynamic, and yes, 2016 was shocking and disorienting for more than celebrity deaths. Trump’s win and the rise of fascism in the West is another kind of disturbing change, but most Americans didn’t know what Brexit was until it happened, and they certainly didn’t mourn Jo Cox after she was assassinated by some fucknut.

The social media hysteria about 2016 is a televisual phenomenon. 2016 has been full of first world problems: the other excellent piece on Medium yesterday by Angus Hervey was a list of 99 reasons that 2016 was good for the world. Every reason cited is very unsexy and mostly related to the third world, which we keep out of sight and out of mind. Willy Wonka dying has more of an impact than marine conservation or clean drinking water, and that’s not a dig or a judgment. Before we even learn to speak, we’re hearing and learning about life from musicians and movie stars and cartoon characters. By the time we reach high school, every cliché and image from something like Saved by the Bell (or Degrassi—pick your poison) is implanted in your head. Black clouds of death weren’t greedy in 2016, but our first world cultural consciousness was kicked in the head over and over again.