There’s an argument that rioters are on the right side of history. 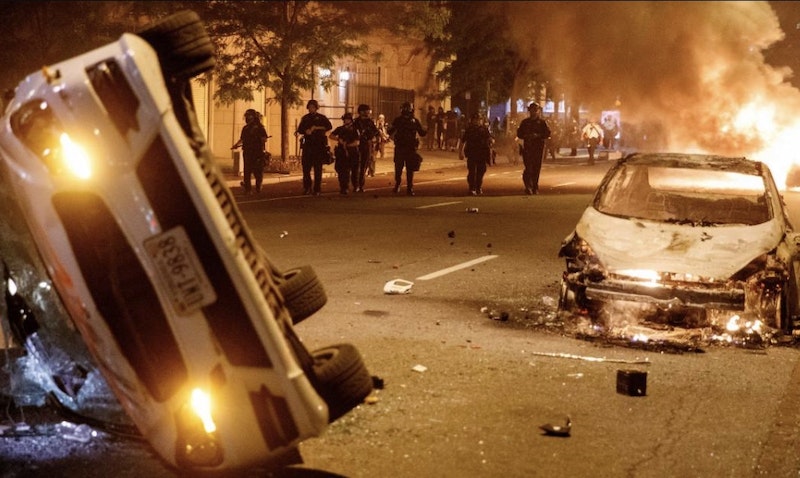 The aftermath of George Floyd’s death has been explosive: although plenty of protests have been peaceful, cities across the country experienced days of mass riots and looting. The images of chaos and destruction have been striking: the Justice Center in Portland under siege; police cars burning in the streets; shattered glass, graffiti, and ransacked stores.

Despite the fact that the riots forced countless Americans to watch helplessly as their businesses were destroyed and their neighborhoods were ravaged, many commentators have been rationalizing and excusing the riots (while making sure to note that they would never shatter a window or kick down a door). “I don’t like violent protests,” Sally Kohn recently explained, “but I understand them.” Elie Mystal says, “I would never throw a brick through the window of a big-box store. I would never set fire to an office building. But I want to. I understand why some people do.” Mystal asks readers to put themselves in the position of a black protester who’s furious about the deaths of Floyd, Ahmaud Arbery, and Breonna Taylor, and who encounters police in riot gear on the street: “And then you see a rock,” he writes. “And then you see an unguarded white-owned business. And then you see a match.”

The “white-owned” disclaimer doesn’t apply here—plenty of black business owners and residents had to deal with looting and vandalism. As Abdishakur Elmi watched a fire threaten his Hamdi Restaurant in East Lake Street in Minneapolis, The Los Angeles Times reports, he was reminded of his childhood in Somalia: “We don’t have law and order. This is not helpful to George’s family.” There are thousands of stories like Elmi’s. However, Mystal’s careful insertion of the words “white-owned” is troubling for another reason: it reveals a zero-sum view of the world in which collective racial punishment is acceptable (or defensiblem).

There’s also the argument that rioters are on the right side of history—or that the history of violent protest in the United States makes their actions more intelligible. According to Kohn, “those wagging their fingers against violent protests need to read up on their American history.” MSNBC’s Chris Hayes echoed this observation: “I think a lot of Americans really don’t know how much the American Revolution was precipitated by the Crown’s abuse of the policing power against the colonists. It was *central*, and often led to unrest, riots, tarring and feathering and the like.”

It’s difficult to see what point Kohn and Hayes were making—are the people who condemn riots today somehow arguing that riots have never taken place at other points in American history? Kohn has been busily posting about violent protests organized by white people over the decades along with the hashtag #WhiteViolence. Is it more acceptable to torch police cars (including cars with people inside them) today because “white mobs attacked Black Americans in at least 25 riots across the country” in 1919? You don’t have to defend racist riots in the early-20th century to condemn violence and vandalism today.

Much of the commentary about the riots insists that black Americans have been left with no other options—as Roxanne Gay recently argued, white people “struggle to understand why black people are rioting but offer no alternatives about what a people should do about a lifetime of rage, disempowerment and injustice.” But Martin Luther King demonstrated that there’s an alternative—and it happens to be more effective than throwing Molotov cocktails at police officers, robbing journalists, and looting Target. Zaid Jilani cites a recent paper by Omar Wasow, a political scientist at Princeton, which found that the nonviolent civil rights protests in the early 1960s were far more effective than the violent protests later in the decade.

There’s a common theme among many of the commentators who are sympathetic to riots as a way to enact social change—they’re ignoring facts that don’t fit their narrative. Mystal identifies with the temptation to attack an “unguarded white-owned business,” but looters have disregarded the signs that declare businesses are “black-owned” and express solidarity with protesters. In many parts of the country, such as Minneapolis’ East Lake St., which has become a “haven for minority-owned businesses,” black and brown Americans have suffered disproportionately from the rioting. Kohn and Hayes emphasize riots throughout American history, but the history of civil rights is replete with examples of heroes such as King and Bayard Rustin who abjured violence.

Finally, it’s disturbing that conversations about police violence—especially in the immediate aftermath of a tragedy like the death of George Floyd—are often devoid of any evidence beyond a horrifying video of an officer doing something unconscionable. This leads to sweeping assertions and exaggerations that aren’t grounded in reality. For example, Gay and Mystal both sought to connect Floyd’s death to the video of Amy Cooper calling the police on Christian Cooper (a black man who asked her to leash her dog in a part of Central Park where leashing is required), in which she repeatedly declared that she was being threatened by a black man. The video was an ugly example of prejudice, but the conclusions Gay and Mystal draw about it are irresponsbile and out of touch with reality.

Here’s how Gay summarizes the encounter: “She [Amy Cooper] weaponized her whiteness and fragility like so many white women before her. She began to sound more and more hysterical, even though she had to have known she was potentially sentencing a black man to death for expecting her to follow rules she did not think applied to her. It is a stroke of luck that Mr. Cooper did not become another unbearable statistic.” If anything, Mystal was even more emphatic: “When Amy Cooper threatened to call the cops, she was threatening to take a black man’s life. It’s a threat that works only because cops are so consistently willing to murder black and brown men. She was able to dial up 400 years of racial oppression and violence on her phone more easily than I am able to order a pizza.”

According to a database maintained by The Washington Post, there have been roughly 1000 fatal police shootings per year in the U.S. over the past several years. Of the 5000 shooting deaths since The Post began tracking the statistic in 2015, 2468 were white and 1291 were black. Of course, this means black Americans are, in fact, being shot and killed by police at a disproportionate rate—whites at a rate of 13 per million, Hispanics at a rate of 23 per million, and black Americans at a rate of 31 per million. However, there are also significant racial differences in rates of violent crime. According to 2018 data from the Bureau of Justice Statistics, black Americans were arrested for violent crimes at a rate of 405.2 per 100,000, while white Americans were arrested at a rate of 113.4 per 100,000. With some violent offenses (such as murder and nonnegligent manslaughter), the disparity is much larger.

It stands to reason that more encounters with police officers—particularly in the context of more violent crimes being committed—would increase the likelihood of a violent confrontation. However, a study of police shootings in the U.S. between 2011 and 2014 disputes this claim, explaining that the “racial bias observed in police shootings in this data set is not explainable as a response to local-level crime rates.” On the other hand, a 2019 study published in the Proceedings of the National Academy of Sciences (PNAS) found that “race-specific county-level violent crime strongly predicts the race of the civilian shot.” The study also found “no evidence of anti-Black or anti-Hispanic disparities across shootings.” A 2016 paper published by the National Bureau of Economic Research reported similar findings: “On the most extreme use of force—officer-involved shootings—we find no racial differences in either the raw data or when contextual factors are taken into account.”

The lead author of the PNAS study, Michigan State psychology professor Joseph Cesario, also explains that the “vast majority—between 90 percent and 95 percent—of the civilians shot by officers were actively attacking police or other citizens when they were shot. Ninety percent also were armed with a weapon when they were shot.” There’s a vast array of open questions about possible racial disparities in police killings. To take just one example, Cesario’s study was criticized by Princeton politics and public affairs professor Jonathan Mummolo, who argued that the study “wrongly assumes black/white civilians encounter police in equal numbers.” It’s also important to note that the study only examines deaths caused by shootings, which would exclude deaths like Floyd’s (though the total number of annual police killings tracked by other sources suggests that shootings account for the substantial majority of killings).

This is a very brief look at remarkably complicated research literature, and many researchers observe that we simply don’t have the data to make bold declarations at this point. But this is why the idea that Amy Cooper could order the death of a black man in Central Park as easily as ordering a pizza is a reckless misrepresentation of what we know about police killings. According to Mystal, “White people do not stop their cops. A majority of them clearly want the cops to behave this way. They want the viciousness. They want the horror… They know that having racist police officers around gives them incredible power, and power makes people feel good, even if they never use it.”

It’s hard to think of a narrative that’s more corrosive to the civic life of our country than the one Mystal presents here. He believes a significant proportion of his fellow citizens actually want black Americans to be abused and murdered by police officers. The universal condemnation of Derek Chauvin and outpouring of sympathy for George Floyd doesn’t matter to Mystal—it’s all just “performative outrage” intended to mask the fact that “most white people want to live like Amy Cooper.”

George Floyd was killed for no reason, and it isn’t surprising that millions of Americans—especially black Americans—feel a powerful sense of anger and anguish right now. This is a time for grief and reflection, and the people who destroy their neighbors’ businesses and burn down their own communities shouldn’t distract us from the fact that the majority of Americans are protesting peacefully. But this is also a time when our conversations about race, policing, and inequality need to be as honest and evidence-driven as possible. Outrage that isn’t tethered to reality will never solve anything.