Hey, an autonomous zone’s worth a try. 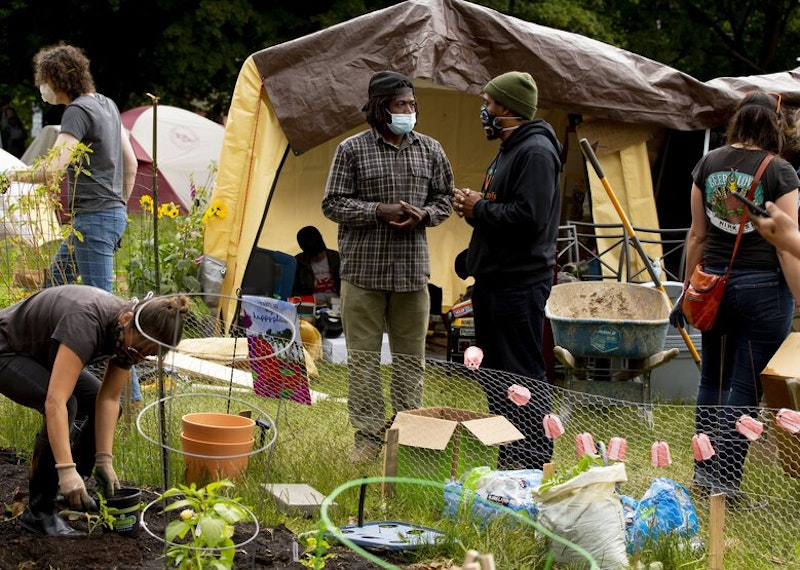 You’re always auditioning for your worldview, so to speak.

Just as it would behoove libertarians to show they can do empathy, liberals to show they don’t want to tax and regulate everyone, or populists to show they aren’t always rude, the anti-cop protesters might want to make a more convincing effort to show we won’t all be set alight or buried in rubble if their faction wields more influence.

It’s not just a few bad eggs among the protesters who want mayhem, either. There are dumb looters aplenty but also intellectuals on the left who think all this is productive—and some who don’t care whether an intact or improved U.S. emerges on the other side of it all.

At the very least, you must acknowledge there are prominent voices on the left who explicitly want an end to all policing, not just a shift in funding or training. Rep. Alexandria Ocasio-Cortez and (in a New York Times op-ed) activist Mariame Kaba have defended this position explicitly, even denouncing mainstream Democrats for trying to soften the meaning of the “Defund the Police” slogan.

Likely, no one at the Times was fazed by the potentially civilization-ending agenda in Kaba’s op-ed, whereas a week earlier the paper forced out an editor merely for allowing a piece to appear by a Republican senator saying troops might be needed to quell riots. (Farewell to dissent at the Times, once a significant publication.)

One of my pet peeves for decades now has been that while the right (justifiably) gets criticized when its crazies say things blatantly at odds with reality, there are more mentally-ill people filling the ranks of the left. I know because I’ve talked to them on countless occasions, having lived in the liberal Northeast my whole life.

Your conservative friend may overestimate how many Mexicans are criminals, but he’s still basically living in a universe with the same recognizable laws of physics and economics as the one you inhabit, and he doesn’t want to get shot. Where, by contrast, are the vituperative essays and tweets every time I encounter some latter-day hippie chick who thinks, say, that we should take everyone’s money away and base the economy on… art? Where’s the outrage when (even conservative or centrist) public figures praise, say, lefty Simone de Beauvoir, who was a Stalinist and advocate of legalized pedophilia?

Elite liberals are dwelling in a psychedelic alternate universe, and they never pay any price for their delusions. No editors will be forced out of the Times for it. On the contrary, the most deranged in their midst will be put in charge of art gallery openings and lucrative/philanthropic galas.

Not that they’ll ever get quite the cultural or policy changes they desire. L.A. may shift $150 million from cops to communities of color. Fine, whatever. The Minneapolis City Council may disband the cops, though of course they’ll be replaced by other cops. New York City will likely let the “defund the police” shouts get just loud enough to justify some much-needed budget cuts but no louder.

No wonder, then, some activists prefer to just take to the streets and try an approach that’s more DIY—or I guess for the time being I should say CHAZ, the abbreviation for Seattle’s protestor-created Capitol Hill Autonomous Zone, struggling like many an Occupy settlement and commune before it to be a tiny island of new civilization in the midst of an old city.

For all my anti-left derision above, the anarchist in me must still root for the CHAZ-creators—led by a rapper with the rhyming name Raz, as it happens—more than for the police and the government behind the police. Already, the implications of an eruption of anarchism are sensed by the broader culture, which makes the powers that be nervous. They giggle at it, yet they start overreacting and doing things like teargasing innocents—or digitally faking photographs of CHAZ gunmen, as the unprofessional Fox News has.

I notice the popular site Urban Dictionary, presumably inspired by CHAZ, declared “TAZ” their June 12 Word of the Day, TAZ an abbreviation for “Temporary Autonomous Zone” popularized by the anarchist writer Peter Lamborn Wilson, a.k.a. Hakim Bey. He wisely observed that one can create small pockets of freedom even in an unfree world without pinning one’s hopes on the transformation of the entire system. He’s also an advocate of sex with children and a convert to a mystical form of Islam, but nothing in this world is all good. (Perhaps if Epstein had gone to live in a Wilson-inspired TAZ, he wouldn’t have had to kill himself, or be killed by federal prison guards under William Barr’s command, or whatever it is that happened there.)

Ridiculous things will happen in the CHAZ (one turncoat leftist acquaintance of mine who used to be an anarcho-capitalist and is now an angry, Portland-dwelling stripper has already paid a brief visit, and found it pretty peaceful). CHAZ has apparently embraced borders, guns, and a stop-and-frisk policy despite being full of people who think those are the very reasons that “right-wing” America is evil. Perhaps that increases rather than decreases the odds that CHAZ leader Raz can get along with the conservatives outside his experiment.

Lest you think a Seattle rapper can’t get along with the dominant white culture there, you should at least keep in mind that local celebrity Sir Mix-A-Lot cites Kraftwerk as one of his biggest influences. We share one world, more or less.

If things get weirder at CHAZ, maybe those old enough to remember will liken it not just to Occupy encampments but to the “Independent Nations Games” sketch, about right-wing militias holding their own feeble Olympics, from Bob Odenkirk and David Cross’ late-1990s series Mr. Show. Also, it may be time to reread G.K. Chesterton’s 1904 novel The Napoleon of Notting Hill, in which one neighborhood bigwig in a fictional 1984 (as it happens) takes a bit too seriously the buffoonish British king’s proclamation that people should wear ridiculous costumes and set up their own town-sized kingdoms.

Such bizarre little experiments are sometimes more worthy of affection than the sprawling super-state that presumes to judge them, anyway.

While our own comical national leader tweets, “These ugly Anarchists must be stooped IMMEDIATELY,” maybe New York City Mayor de Blasio’s commie wife is closer to the truth when she says (as Jim Treacher reported) that a world without cops would be “like a Nirvana.” That’s not a bad alternate name for an autonomous zone in grunge-spawning Seattle, come to think of it. We’ll see if it’s an experiment that lasts, but if it doesn’t, that will not excuse a return to complacency.