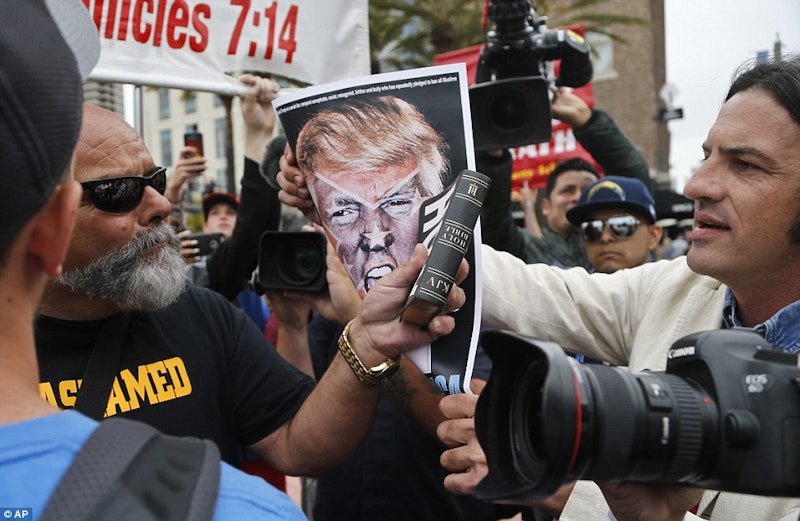 Right now, the American right and left are polarizing into rival authoritarianisms, each egging the other on. Suddenly I can see how Europe squared off in the 1930s into fascism and communism. I hadn't quite understood how people took these murderous, deluded ideologies seriously. It's simple, really: they were driven above all by the hatred and fear of the other, by the sense that the only thing that could fight a totalitarian war machine was another totalitarian war machine, by the unfortunate reality that there were only two possible or relevant positions or identities, so you just had to hold your nose and choose.

But the 2017 mini-recapitulation has a dime-store quality, a touch of the ersatz, a hyperbolic hucksterism that’s both up-to-date and traditionally American: P.T. Barnum on Twitter.

In many ways, of course, Trump represents the rise of an authoritarian right. The nationalist rhetoric is excessive, and the Muslim ban has a fascist flavor. He's very likely to be interning and deporting even more immigrants than Obama did, walling people in and walling them out. His cabinet of billionaires and generals is a symbol of intertwined capital and kinetic force, ExxonMobil wielding “the greatest military the world has ever known.”

On the other hand, even as a necessary protest movement emerges to protect Muslims and immigrants, the radical left has become obsessively authoritarian in response, more and more the mirror image of the assholes they face. As the women's marches blossomed, anarchists and radicals spent most of the week celebrating Nazi-punching, while even the mainstream left started routinely referring to all Trump supporters as Nazis, raising the specter of punch-out civil war. At Berkeley, people rioted to shut up Milo Yiannopoulos; the left bubble couldn't talk about anything or anyone else. NYU students got arrested trying to shut down a Gavin McInnes comedy gig, while professors swore to protect their students and one another (quite privileged people, overall) from the Nazi comedy onslaught.

These people are very confused: at a moment when the actual government presents a real and urgent threat to human freedom, they’re trying to gag problematic comedians and silence isolated attention-seekers. They think that’s a blow against power. The whole left is turning against half the population of the United States in a totalizing us-versus-them structure that finalizes the break between urban and rural, heartland and coast America. The left thinks it needs to get a lot more like Breitbart and Trump's Twitter feed: no more Mr. Nice Guy. And when this generation of college students ascends to power, it will institute an extreme censorship regime, as it already has done on campuses nationwide.

I think, however, that America in 2017 is quite different than Europe in 1937; those classical Marxist and fascist dictatorships had a certain implacable gigantism, a crushing brutalist concrete facade. We've got celebrity obsession, Twitter, virtual reality; as deep as it runs is “you can't say that!” We're even more obsessed with symbols and slogans than they were, but ours always ring just a little ironic and self-puncturing. Donald Trump is no Hitler; he's just too half-assed, too ratings-obsessed, too slapdash, too anxious to be liked. He's too much the American pitchman, more Billy Mays than Francisco Franco.

Meanwhile, if you think you're going to throw off your shackles or strike a blow for justice by trolling Republicans (“Nazis”) on Twitter or breaking things and punching people to express your view that Comedy Central shouldn't give that jerk-off his own series, you really should think some more. People have taken to comparing this moment to the 1960s, but I think you'll find that Martin Luther King, the Black Panthers, the SDS, and the Yippies were not fighting to shut up Don Rickles, or even George Wallace, or indeed anyone at all. Quite the reverse; they exploited the possibilities of free speech, and celebrated it, and needed it. You need to focus on the realities of state power being operated on bodies.

It’s a bad time to be an anti-authoritarian; we've got no faction. Looking on the bright side, however, perhaps in the war between Milo and America's undergrads, today's kitsch authoritarians will fight each other to a standstill and a new, even more thorough gridlock will form, debilitating both sides and keeping them from realizing their mad plans for world domination.