Blinded by the Light tells of Pakistanis and the gospel of Springsteen. 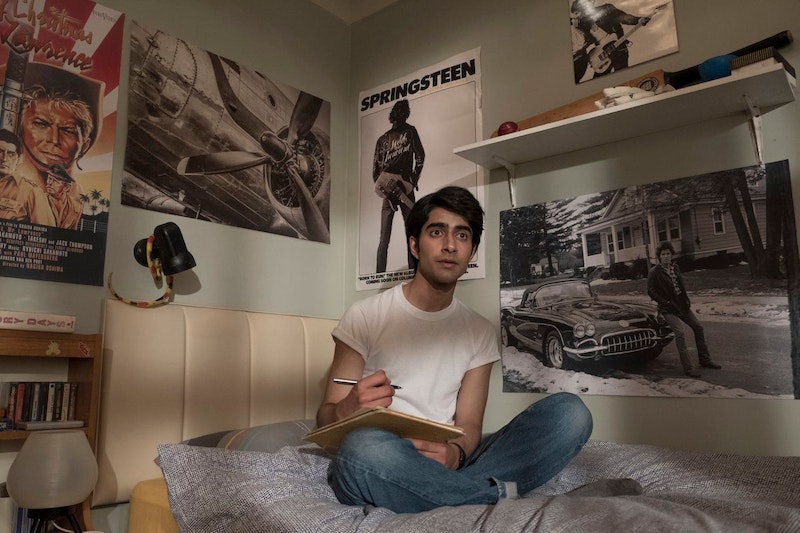 “You think that this man sings for people like us?” demands the immigrant father in Blinded by the Light. From the back of the theater there rises a tear-choked, male, white, baby-boomer voice. “You’re damn right he does,” the voice blurts out. “Bruce is for everybody!” Or that would’ve happened except I’m shy. The feelings were all there. Director Gurinder Chadha has uncorked a crowd pleaser with her new film. I’m pretty sure the crowd in question has a lot of Asian Brits reflecting on their experience in that remarkable land. It certainly includes white males in late middle age, especially those from the northeastern U.S. Chadha reassures us that what we love won’t die. A true-life Pakistani boy growing up in England discovered that he loved Bruce Springsteen, and now his story’s being told in front of us. My heart throbs and its thunder breaks the sky (if I may sound Boss-like).

The problem is that the movie’s trailer ignores all this. The movie itself seems like an expanded souvenir edition of the coming attractions. Many films have had their plots laid out by trailers. This time the movie’s emotions get used up, or lived through. Light doesn’t have much to add to its essential two and a half minutes. Padding may not be the term, since the extra one-hour-forty is well made. One especially admires Chadha’s staging of racist white hooligans, but she’s also got a touch for crowded homes and lively schools, not to mention earnest teenagers bumping up against life. The cast is solid, and the leads (Viveik Kalra and Kulvinder Ghir) hit the nail as the self-individuating son and embattled father. You won’t get bored, but you may notice the choppy feel that comes from a jobbed-together script. Conflicts pop open and get buttoned shut. Characters crossing paths in hallways yelp lines of emotional exposition. At the movie’s climax, there’s a public assembly of some sort and the hero’s standing in front of it, speaking from the heart. This development seems especially rote because it entails setting aside his prize-winning essay about Bruce, also written from the heart.

The movie’s based on Greetings from Bury Park: Race, Religion, Rock ’n’ Roll by Sarfraz Manzoor, a BBC journalist and on-air personality. A teenager during the Thompson Twin 1980s, the Pakistani Brit had his life rocked when a Sikh friend led him to the gospel of Bruce. Just two chapters from the book provide the Bruce material, but that material adds up to a lot. A boy trapped in a premodern family lays claim to his soul and forges a life in the modern world. He does so by following the example of a man made famous by modern communications, and his career of choice is also in communications. He’s entered the world of “dig me,” as opposed to that of “dig my family and how I fulfill my place within it.” Even so, he holds on to his family. In the movie this holding on is full-bore, with dad and son clinching while dad delivers some committee-made lines to button up their troubles: “But promise you will tell our stories too,” etc. In the book, things are more ragged and painful—years were spent apart, and Manzoor’s father died a day too soon to see his boy’s first article in print.

But you can’t break the ties that bind. “For my mother Rasool Bibi Manzoor and in memory of my father Mohammed Manzoor with love and gratitude,” reads the dedication to Greetings. Manzoor seems to have become the man he wanted to be without losing what counts. Looking on, I’m thrilled that one of my heroes made it possible. Better yet the hero looks like me. I blush at this sentiment and at this well-worn phrase. But new times are upon us and the phrase settles on new heads. Movies used to have a wise old foreigner who’d give the hero a sentence of heavy wisdom at some point. This film has a wise old white guy and he delivers the wisdom (“Good friends deserve to be listened to,” intones the gentleman living next door to the hero’s family). More wisdom, much more, descends from the film’s other wise old white man, the one whose spirit presides over the whole enterprise. Bless us, we’re still in the game.