Interview With Ford Fischer, a Journalist Who Documents American Turmoil

YouTube has punished him for simply doing his job, but he's still covering Antifa, Proud Boys, and much more. 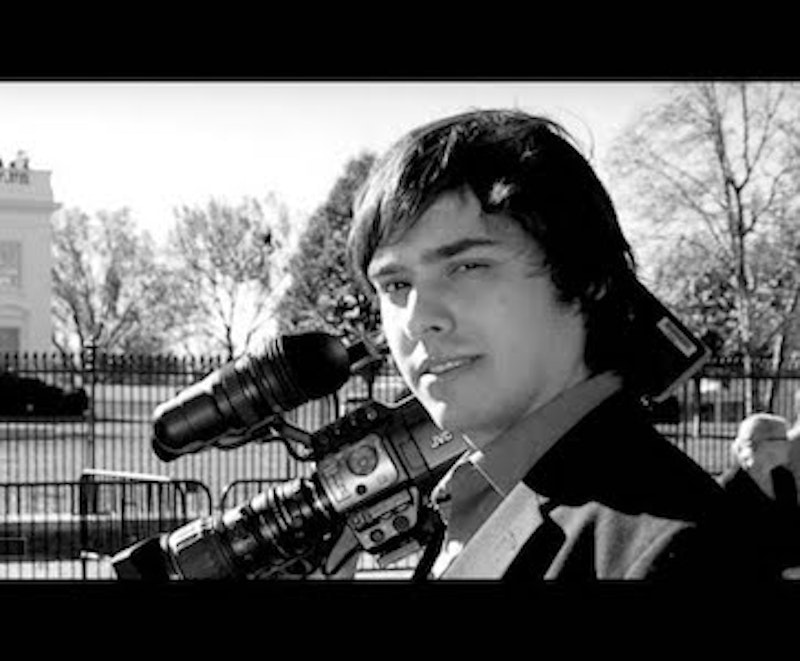 Ford Fischer is the editor-in-chief of News2Share, a citizen news company that documents politics and activism using livestream and raw footage. His work has been featured on every mainstream news network as well as award-winning films, including Spike Lee's BlacKkKlansman.

Fischer became collateral damage in the online battle between conservative comedian Steven Crowder and Vox video commentator Carlos Maza that led to YouTube going after controversial content on its platform in what came to be known as "Vox Apocalypse.” His account was demonetized, despite the fact that he's a journalist who covers activism and extremism—not an extremist, nor an activist, himself. I spoke to Fischer by phone for this interview.

Splice Today: You're often right in the middle of a lot of turmoil, which makes your job unique. How did you get into this line of work?

Ford Fischer: When I was 15, I worked for a cable station covering local government. I was shocked by the divisiveness I'd routinely witness in the meetings I covered. In Washington, D.C., I studied Film and Media Arts at American University’s School of Communications Honors College, graduated in 2016, and eventually shifted my focus to covering protests by activist groups.

ST: Do you cover events organized by antifa?

FF: Antifa's general mission is to disrupt events organized by what it considers dangerous people rather than organizing its own events. While I’ve covered antifa-only events, they’re a little more rare.

ST: Portland's such a left-wing town. I'm wondering why there are so many right-wing demonstrations there, with antifa standing in opposition to them.

FF: The right-wing groups targeting the city are generally based outside of Portland. For example, Patriot Prayer is based in Vancouver, Washington, about 30 minutes away. They'll announce a rally and antifa is sure to show up.

ST: It seems like if antifa just ignored such groups, they'd hardly get any attention.

FF: Antifa doesn't think about it that way. They feel it's their duty to show up at these events and make themselves known. To them, ignoring something's giving it a chance to flourish unchallenged.

ST: You shot a lot of footage of the Charlottesville protests. Was Trump correct when he said there were fine people among the right-wing protesters?

FF: I'd just say that some more moderate conservative/MAGA types probably initially showed up to Charlottesville hoping to protest against the plan to remove the Robert E. Lee statue, but by the end of the first evening, after marchers had chanted, “Jews will not replace us,” it was clear to everyone what kind of event it was going to turn into. Anyone who showed up on August 12th would’ve known by then what the event had turned into.

ST: Journalist Andy Ngo has been assaulted by antifa, once seriously. Do they target you too?

FF: I don't feel I'm a particular target. I've had mixed experiences with them, varying drastically by city. In Berkeley, while covering a "No To Marxism" event, a few black bloc-clad antifa said to me something like, "Get out of here. The police aren't here, so they can't help you."

ST: So you left the area because you thought they'd hurt you?

FF: Yes. And in Providence, Rhode Island, antifa sprayed urine around and I caught some in the face. But I’ve also covered antifa demonstrations in DC, Tennessee, and several other places where I could interview them and have no issues with violence at all. I think it speaks to the non-hierarchical style of their movement; with no national leadership of any sort, the style and tactics of local organizations—including how they see press—will vary drastically.

FF: I like to film an event from beginning to end to capture what really happened. The media tends to focus on the optics of violence, but there's usually so much more going on that a two-minute clip on cable news can't catch. I like to have a full account. What was said? By whom? If violence occurred, what happened before it? How did the police behave? There’s a lot of moving parts to an event like this, and I don’t trust the mainstream media to get it right.

ST: You've covered the Proud Boys as well, because they're often found where antifa is. Would you characterize them as the security force for right-wing protest groups?

FF: Sometimes that's their role, and sometimes they're the rally. It’s a mix.

ST: But they get violent just like antifa does, right?

FF: They both use violence but the Proud Boys advertise that they like to fight in self-defense. A really common thing they say is “We don’t start fights, we finish them!” On the other hand, antifa sees the presence of groups like the Proud Boys as a form of aggression in itself, so they see violence as sometimes justified even when they initiate it.

ST: In a sense, they're perfectly matched to end up in a fight that follows the same pattern.

FF: You could say they complete each other.

ST: How else do they differ?

FF: Antifa's decentralized—organized on the local level—whereas Proud Boys are more national with top-down leadership. For example, I filmed a pro-Trump rally in California, and a few Proud Boys were there. One of them was the same Proud Boy I filmed responding to a headbutt by punching someone in the face back in D.C. last month. Antifa’s loosely organized, while Proud Boys are hierarchical and have a national leader, unlike antifa.

ST: You started off covering Black Lives Matter a lot, but I don't hear much about them recently. Why's that?

FF: Black Lives Matter groups still exist and do work in their specific space, but they’re less likely to engage in the sorts of “culture war” fights that antifa do, which I think is largely why the media’s focus on them has waned.

ST: How is BLM organized differently from antifa?

FF: The primary difference is that BLM’s primary qualms are with police, the state, and society as a whole. Their demonstrations may disrupt society, such as blocking roads, but their adversary isn’t some other citizen movement. They hope to change society by drawing attention to systematic inequity.

ST: So antifa's attracting more attention now that we're in the Trump era?

FF: Anti-fascism as an ideology has a clear, specific adversary: fascism, or those they see as acting in its furtherance. Antifa’s rise in the last few years is obviously adjacent to the rise in right-wing street activism, which wasn’t very common pre-Trump.

ST: Let's talk about a tough subject for you, Vox Apocalypse, a battle in which you were caught in the crossfire. YouTube went after certain right-wing extremist content, right?

FF: Well, it wasn’t exclusively right-wing content that was censored. My channel reports on the left and the right, but isn’t any ideology itself. It’s news.

ST: And they deleted some of your videos?

FF: During AIPAC 2019, I filmed pro-Israel and pro-Palestine protesters verbally clashing, and a Holocaust denier showed up. What I found really fascinating is that both sides confronted that person. I put out a full video of the argument entitled “Holocaust Denier Chris Dorsey Confronted at AIPAC.” YouTube deleted it amidst the “Vox Apocalypse," presumably because they don’t know, or pretend not to know, the difference between Holocaust-denying content and documentary footage that shows people confronting a Holocaust-denier.

ST: That must be so frustrating. They also demonetized some of your videos, correct?

FF: They demonetized all of them, including ones not dealing with any controversial issues at all. CNN runs all kinds of clips showing violence or addressing issues related to racism or extremism, but YouTube would never go after them.

ST: Have you ever had an actual interaction with YouTube in order to explain what it is that you do—journalism?

FF: No, it's been only form letters.

ST: Has the media gotten involved?

FF: A lot of media outlets including Forbes, Rolling Stone, Washington Examiner, and several others have requested comment, but YouTube has always either declined to comment or said apparently without intention that they’re “looking into it.”

ST: How has their mistake affected you financially?

FF: YouTube was big source of my income, but now I have to rely on my Patreon only, so it's hurt me.

ST: Do you have any hope of fixing the situation?

FF: There’s a reapplication process, which is essentially starting over as a YouTube partner. It’s not an appeal. Theoretically, they’d like me to delete even more of my own videos ahead of reapplication to make it likely that they’d take me back.

ST: Would you do that?

FF: I won't take any of my videos down myself. I’ve done nothing wrong, so if they want to censor them, they need to do it themselves. If they were willing to have an actual human talk to me, I’d be open to that discussion. For example, I’d be willing to put a disclaimer on them announcing that my work is simply raw footage, not an endorsement of any ideology, if YouTube thinks stating that obvious fact would help.

ST: Do you feel YouTube has departed from its original mission?

FF: Yes. It was meant to be a platform to “broadcast yourself”—to give everyone a voice—but it’s departed widely from that goal.

ST: Why is the platform becoming less democratic?

FF: Today independent content creators are being algorithmically wiped out in favor of the big names. CNN, Fox and all the rest know cable is dying, so they’re taking over independent spaces like social media, and the giant tech firms are welcoming it. The demonetization and censorship is one step in that takeover.