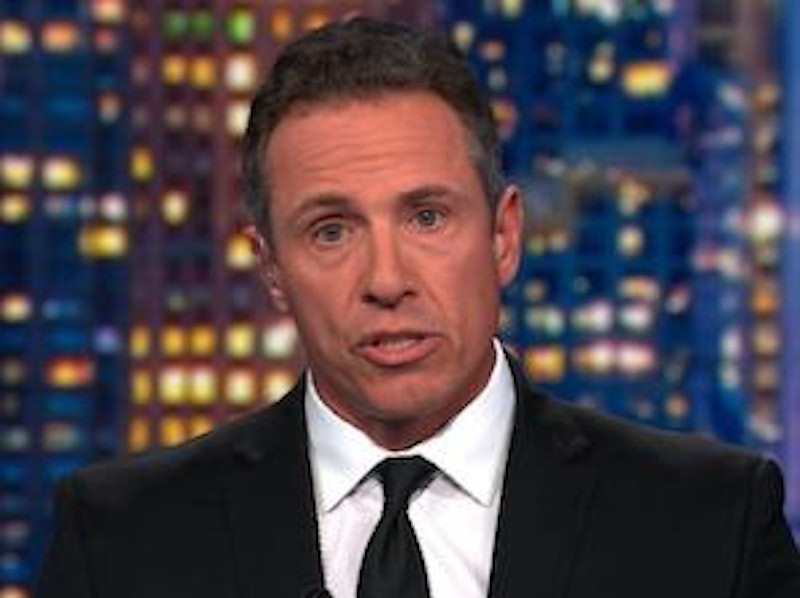 Turning every political conflict into an ethnic battle—no matter how hard one has to squint to see the ethnic element of it—not only corrodes our ability to deal with each other as full-fledged individuals but tends to destroy whatever hope there was of dealing with the more nuanced issues at hand.

I remember pitying Iraq a bit a decade ago when observers noted its political coalitions are almost always ethnic or tribal, with people voting for members of their own tribe. It’s getting harder to believe the U.S. will end up any other way, though.

Media figures such as CNN’s Chris Cuomo aren’t helping when they invent ethnic grievances on the spot. Called “Fredo” by a heckler—a reference to the dumber brother from The Godfather, with New York governor Andrew Cuomo presumably the smarter brother in this analogy—Chris blew a gasket and threatened to throw the heckler down a staircase, not a great way to prove you aren’t a gangster.

Interesting questions that then didn’t arise but might’ve include “Are you extra touchy right now about being likened to a character who helped arrange a prison assassination because your brother’s prison system failed to keep sex trafficker Jeffrey Epstein alive?”

The truly intrepid might have asked whether the Cuomo family is extra-nervous about Epstein-related inquiries because Gov. Cuomo’s ex-wife, the doubly-dynastic Kerry Kennedy Cuomo, is rumored to be a friend and source of informal legal advice for Epstein’s ex, Ghislaine Maxwell, who might well be looking to embarrass the whole establishment if she believes it killed Epstein (Maxwell seems pretty plainly to have wanted to be photographed at an easily-found L.A. In-N-Out Burger where she was seen a few days ago reading a book about dead CIA agents as if to drop a heavy hint about Epstein, be it warranted or not).

The downright paranoid might’ve noted as an aside that some time after Gov. Cuomo and his wife split, the mother of the guy she was having an affair with was bludgeoned to death with a fire extinguisher in upstate New York, ostensibly because of a random unsolved robbery.

Forgive me for sounding like watered-down Glenn Beck, but I’m not claiming to have any idea what’s going on or how the establishment works (nor how many neckbones a man normally breaks if hanging himself in prison). So strictly speaking, I’m not even “raising questions.” I’m saying these are the questions we won’t be talking about, in part because “Fredo” is still mentally quick enough, like most of his fellow Americans these days, to turn the whole heckler fracas into a mere issue of racism. After threatening to throw the heckler down the stairs, he calmed down and explained (falsely) that Fredo is “the n-word for Italians,” an ethnic slur.

A party-line Democrat I know dutifully proceeded to tweet, with real vehemence, about how Trump and his supporters are now exposed as racist against Italians and how we mustn’t let this bigotry continue (the tweeter even wanted people to report Twitter accounts that use “Fredo” as possible harassers). A few days later, we all snap out of it and remember that no one engaged in any current American political argument cares about Italians one way or the other. But for a short, strategically useful time, we were right back in the stupid tribal-warfare conversation about p.c. and anti-p.c. It has gotten to be a real time-waster and distraction, perhaps by design.

CNN, by the way, stood by their man, as they presumably have on prior occasions when Chris Cuomo said or tweeted baffling things, including his assertion that the First Amendment does not protect hate speech (read the Constitution, he implored), his assertion (around the time of his low-rated CNN town hall on guns) that the Second Amendment doesn’t protect an individual’s right to bear arms, and his assertion that it’s legal for CNN to read leaked Wikileaks documents but not for members of the general public to do so.

Yet to top off all the distracting absurdity, Chris Cuomo had jokingly called himself Fredo years earlier on a talk show. Maybe, as with the actual n-word, it’s okay if Italians themselves say it (or spell it with an “a” on the end).

The permutations of p.c. claims about language and reasons to be offended, taking every slight to the nth degree, are becoming as complex as the math physicists use in string theory, wherein one dominant strain is called “M-theory” and even the physicist who coined the term admits he doesn’t know what the M stands for. Perhaps a complete string theory could explain why New York State is now spending money (unbeknownst to the Governor, which is to his credit in this case), just to add an “M.” in the middle of the name of the “Gov. Mario M. Cuomo Bridge” on road signs, as if any motorist is going to get lost without that M. in the middle of Andrew Cuomo’s dad’s name.

While I don’t think Italians are inherently violent or fascistic, I sometimes wish I’d bought the (non-ironic) Mussolini t-shirt that an elderly shopkeeper in Manhattan’s Little Italy tried to sell me many years ago. She beamed about the Mussolini t-shirt, so I didn’t want to look supportive and didn’t buy it. But if I had, I could wear it now and claim it’s a show of solidarity with Italians as they face the dark night of anti-Italian bigotry from the fascist Trump administration. That would be no more upside-down than the rest of our political priorities lately.