No Quarter for Trump Supporters 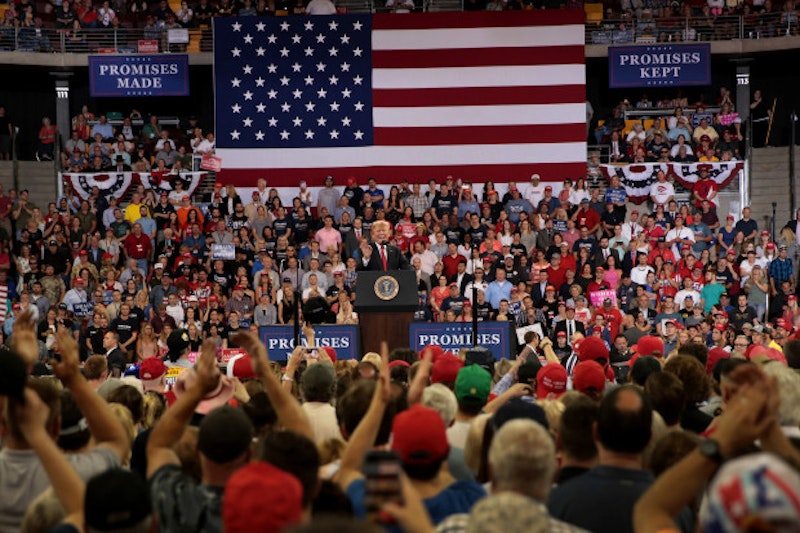 The New York Times, in its never-ending anthropological survey of “Trump supporters you could maybe relate to”—in other words, rich and white—interviewed a bunch of Republican voters in the Midwest for an article called "As Critics Assail Trump, His Supporters Dig In Deeper." Unlike the paper’s typical softball profiles of low-key white supremacists, this one really makes me worried that Trump will likely win reelection in 2020.

As I’ve written before, the Democrats can never be trusted to put the right person on the pedestal (remember how drawn out the primary in 2008 was? Those super delegates didn’t flock to Obama until early the summer). Besides that, Trump’s an incumbent, and you’ve got his “moderate” supporters saying stuff like this: “‘He’s not a perfect guy; he does some stupid stuff,’ said Tony Schrantz, 50, of Lino Lakes, Minn., the owner of a water systems leak detection business. ‘But when they’re hounding him all the time it just gets old. Give the guy a little.’”

I understand why half the people in this country have steam coming out of their ears reading something like that while thousands of immigrant children are imprisoned in chickenwire jails with gigantic Trump murals staring down at them like Mussolini’s all-seeing eye. But according to the Times, “Republican voters repeatedly described an instinctive, protective response to the president” when they catch a bit of Rachel Maddow, NPR, or their liberal friends on social media.

Kumail Nanjiani, comedian and writer/star of The Big Sick, tweeted last week, “I truly believe arguing & trying to convince people is not going to work. If they can see pictures of children in cages and justify it, in any way, they are gone. It is a waste of time and energy. We have to mobilize and motivate the other people, those who are rightly horrified.”

Gina Anders, a well-educated 46-year-old Republican with “not a stitch of ‘Make America Great Again’ gear in her wardrobe” complained, “We can’t have a conversation.” Another Trump supporter, 58-year-old Jeff Butts, said, “It’s just incredible what the nation is trying to do to disrupt this president and his agenda… We don’t get to hear about that. We only get to hear about the crying babies on the border.”

Nanjiani’s tweet is on the money: if you’re splitting hairs about what constitutes a cage, or playing disingenuous games of “what-about-ism” and bringing up the fact that Obama deported more people than any other president in the history of this country combined, you’re too far gone to be brought back into the fold of a civilized, humane society. What Obama did was very bad, but that doesn’t negate Trump’s continuation and escalation of those policies.

Julie Knight, 63 from Algona, Washington said: “It bothers me that he doesn’t tell the truth, but I guess I kind of expect that, and I expect that from the media, too—not to always tell the truth or to slant it one way.” The Times caught a very rare breed of Xenophobic Pokémon with 17-year-old Gary Winthorpe, who hopes to cast his first vote for president for Trump in 2020: “I’m not blindly for Donald Trump. I have a fair bit of skepticism toward him. But I feel like he is trying his best.”

I don’t agree, but even if he were trying his best, how is that a point in his favor? Explicit xenophobia was how he opened his primary run over three years ago. If he were truly “doing his best,” the ovens would’ve been overstuffed by now and the National Guard would’ve stormed Chicago, Baltimore, Detroit, and countless other de facto segregated cities and murdered as many poor black people as possible. Luckily, Trump is lazy and never expected to win, but he’s clearly beginning to dig it, especially after the summit in Singapore.

Liberals and leftists who are uncompromising in their disdain toward Trump sympathizers are pretty reasonable considering everything that’s going on right now. I don’t begrudge anyone for casting Trump supporters out of their lives—luckily, in blue Maryland, I didn’t know anyone that voted for Trump, save for a few that actually did on a stoned, nihilistic lark.

I don’t think it’s unreasonable to refuse service or disrupt anyone in the Trump administration, whether it’s Sarah Huckabee Sanders or Stephen Miller, because they’re complicit in the implementation and defense of concentration camps. Does Maddow get carried away on Russia? Yes. Is the hysteria over I.C.E. and the way people are being treated at the border overblown? Absolutely not—besides the fact that it goes against everything this country stands for, namely immigration, the parallels to Nazi Germany can no longer be dismissed as partisan hyperbole.

If anyone offers a defense of these camps or the administration’s enforcement of our fucked-up immigration policy, they’re owed no quarter because they’re too far gone, and the continual attempts by the Times and other liberal papers to “humanize” Trump supporters is not only disgusting but on a practical level very stupid, and disheartening, because it shows how little they’ve learned since 2016.

“When they go low, we go high,” as admirable as it sounds, didn’t work. The left needs to silence these people and defeat them by any means necessary. Otherwise in four years we’ll be reading warmhearted profiles of I.C.E. agents who clean out the ovens and sometimes feel a little remorseful. “But hey, I get to keep the jewelry.” That quote isn’t completely implausible anymore.