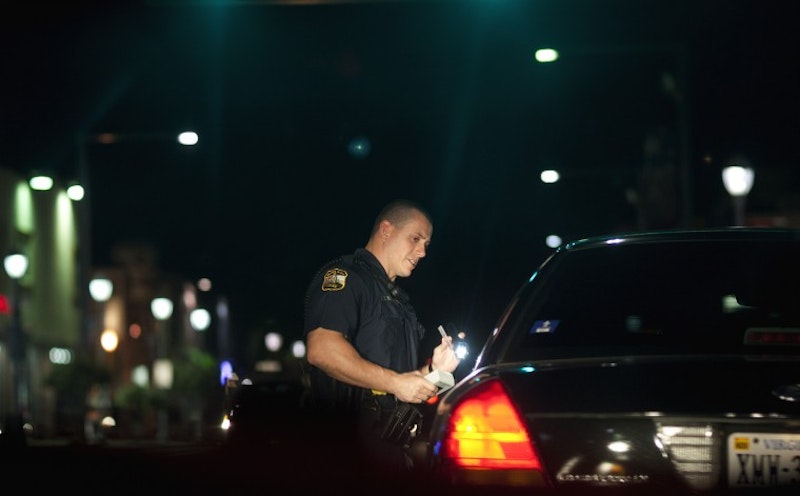 Regardless of how stable America's government may seem, with new allegations of invasive government surveillance on the rise, its become clear that the U.S. doesn't oppose police state tactics. The country's totalitarian descent is on grotesque display when police officers harass motorists for driving cars with tinted windows.

The website franchise.org reports that the window tinting industry generates about $38 billion dollars a year—nearly equal to the yearly worldwide profits of the video game industry. Though it's done for a variety of reasons, window tinting has earned its popularity because it guarantees privacy for motorists and their belongings. Regulations that enforce safe VLT (visible light transmission) levels in tinted car windows vary state to state, and some think these laws only provide extra work for police in jurisdictions with low crime rates. VLT violations also give police officers the right to stop and search vehicles without conventional probable cause.

Cops are the ones who ultimately determine when to enforce VLT laws. Usually, their choices are determined by one simple fact: Big Brother's worst nightmare is anything that can stand between his eagle eye and the fate of those he wishes to control, so the tinted window becomes a lightning rod for the feverish speculation of paranoid police, a blind spot hiding all sorts of unspeakable dangers. Split second decisions are a law officer's burden, and until the VLT violator rolls down the window no one can predict a traffic stop's outcome. Even a small lack of vigilance could result in dire consequences for those on either side of the car window, which is why relaxing unsafe VLT standards would take the police just a little further out of harm's way. The same can be said for the drivers who risk death every time their own window tint potentially sets them in the sites of a nervous officer's gun. Once the gross distrust that inspired VLT laws is thrown out, a lot of wasted time and tax revenue used to try those who contest VLT fines would also disappear.

Prioritizing the enforcement of VLT laws will not bring more criminals to justice. It will not result in a better relationship between drivers and police officers. It will not even deter anyone from tinting their windows, as an unsafe VLT level is a misdemeanor. The only thing that these laws can do is bolster the American government's reputation for spying, prying, and micro-micromanaging the lives of its citizens. If the U.S. wants to make a gesture towards freedom, then the unreasonable stringency of VLT laws must be done away with forever.