Santa Is Turf and So Is Jesus, But Penguins Are Magic

Why that lady on Fox ought to be ashamed. 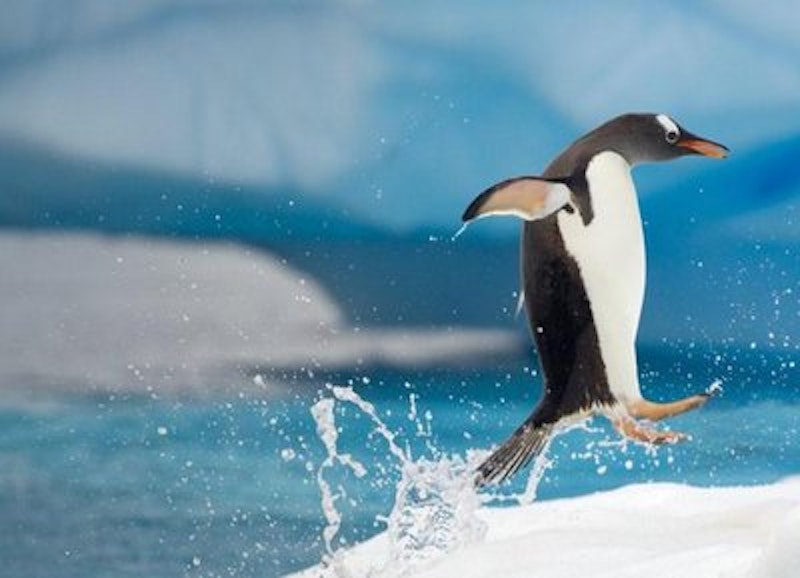 Lately there's been a lot of angry noise about Megyn Kelly, the slender but resonant-voiced blonde who is now a nighttime star at Fox News. Kelly had the bad judgment to tell viewers that Santa Claus is definitely white and so is Jesus.

She did so because a black woman writing for Slate.com was bold enough to confess that the white Santa had made her feel confused and left out as a kid.

Why did Kelly feel the impulse to be so definite about a being who doesn't exist and another who only sort of existed? When everybody landed on her, she followed up by saying it had all been in fun. After all, nobody talks seriously about magical beings who bring presents to little children. But dragging Jesus into the discussion was Kelly's idea, and people do talk with immense seriousness about allegedly divine figures at the center of world religions.

What's at stake in this whole business is turf. Santa is a touchstone and he had better belong to the whites. Of course, racial territoriality is never a nice thing to see, and when practiced by the top dog it's more than a bit off-putting. Without a little whimsy as cover, the words might never have made it out of Kelly's mouth. But once they were spoken, the original impulse carried her along. Santa wasn't enough, she wanted Jesus too. When you're joshing about the fancies of small children, Santa is certainly a bigger deal than God's son. But when you're deciding who owns the culture, Jesus is home plate. Kelly went for the steal.

One bright spot emerges from the spectacle. Aisha Harris, author of the Slate.com piece, kicked her item into gear by suggesting that we get ourselves a new Santa. “From here on out, Santa Claus should be a penguin,” she wrote in rollicking fashion. “That’s right: a penguin.” It's not often you hear a good idea. This idea is so good that it doesn't need an argument. Even so, here's one: penguins are wonderful, fat old men are just so-so.

Of course, non-blacks might wonder about the new Santa having a black face, and people who aren’t either black or white might wonder where they fit into the new deal. Ill-disposed types might dig up unflattering details about penguin habits—chronic regurgitation, for example. But fat old men have their habits too, and Christmas needs more magic. That's something penguins have got. Out of all the earth's creatures, they are the It children.

David Brooks proves not so bad.  Brooks is a center-right columnist for The New York Times and writes a pleasing, smooth brand of prose that rarely contains a thought worth hearing. On Tuesday he came out with “The Thought Leader,” a rundown of a certain sort of career, the kind that begins with glittering term papers at fancy schools, passes through gilt-edged conferences at Davos and finishes with the “powerless lunch,” where a formerly great ancient meets with another and discusses the future of an abstract noun while the waiters fidget and look at the time. Friends and enemies have noted that the typified career sounds not so different from Brooks' own.

The column contains two choice items. First, there's the description of the careerist's upstart phase, when he or she practices the “rabid art of being condescending from below.” I think condescension from below is a wonderful practice. It makes my life worth living and I'm glad Brooks has decided to name it. I would drop “rabid,” though the oxymoron is fun and the word does make the sentence sound better.  The “beguiling art of being condescending from below”? Well, whatever.

Then there's this, taken from the down slope of the career cycle, when the great one is feeling not so great and utters “cries for civility and good manners, which are really just pleas for mercy to spare his tender spots.” I'd say these cries are more in the way of indignant harrumphs than pleas for mercy, but the point stands. It's a point made at Brooks' own expense, since he has a bit of a racket going as Mr. Civility.

You'll see that the two jokes poke fun at the opposite sides of a great divide, that between obscurity and success. Brooks has spent time on both sides, and by making the jokes he is practicing what the old-timers used to call rueful self-awareness. It's not a bad trait and it's dying out. It's found on the rugged plains of the Internet only when some print monster, such as the Times, cruelly drops the creature there to fend for itself.

Macklemore!  Brooks warns that the upstart idea-monger “will seek to establish his edgy in-group identity by trying to prove that he was never really that into Macklemore.” This is the third or fourth time I've seen a mention of Macklemore. All have been brief and uninformative, and I'm not even sure where they were. But as a test of Internet grazing's efficacy as a source of cultural awareness, I will hazard the guess that Macklemore is a young white man who performs hip-hop of some kind, comes from the Pacific Northwest and has made his name through self-promotion on the Internet. If I'm wrong, tell it to the penguins.