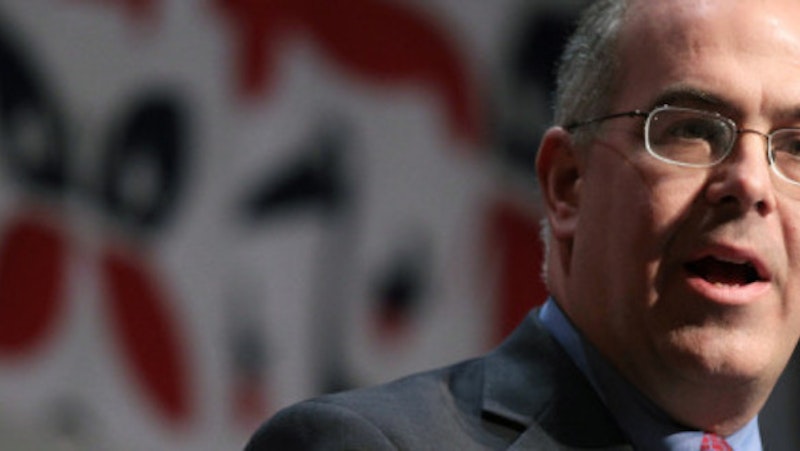 Acknowledging the existence of David Brooks is an admission of defeat. A walking armchair, Brooks is condescending, narrow-minded, an affluent sponge who wastes ink and bytes every week of the year. Brooks has a quota to fill as an op-ed columnist for The New York Times, and knows he can phone in a piece of tossed-off ruminations that his followers will take for gospel. Watch him savor and suck up applause, grinning like he’s being tickled in the trousers. This is not a modest man: he’s like an old white Ivy League professor whose chamber pot musings are all that’s fit to print.

Brooks’ Dec. 17 Times column was, generously, a self-parody. This call from atop the mountain, headlined “The Thought Leader,” begins beautifully: “Little boys and girls in ancient Athens grew up wanting to be philosophers. In Renaissance Florence they dreamed of becoming Humanists. But now a new phrase and a new intellectual paragon has emerged to command our attention: The Thought Leader.”

David Brooks reminds me of a lot of people who’ve tried and failed at something, whether it’s photography, music, or in this case, writing, who are painfully aware of their mediocrity/fecklessness, eager to cut down their more talented and/or successful peers by casting what I call “needles of doubt.” Sly digs at a person’s clothes, personality, anything the Chamber Pot Leader can get. In casting his latest gaseous bellow, Brooks goes from self-parody to sounding practically suicidal. He’s projecting all the disappointments and powerlessness he feels in himself onto something without a face. He keeps his jobs because most people are like this: eager to diminish those who’ve got the balls to go out on a limb, and even more excited to cackle when that branch cracks.

The stupidity sings: he goes on to explain that his liberal strawman is “sort of a highflying, good-doing yacht-to-yacht concept peddler. Each year, he gets to speak at the Clinton Global Initiative, where successful people gather to express compassion for those not invited. Month after month, he gets to be a discussion facilitator at think tank dinners where guests talk about what it’s like to live in poverty while the wait staff glides through the room thinking bitter thoughts. He doesn’t have students, but he does have clients. He doesn’t have dark nights of the soul, but his eyes blaze at the echo of the words ‘breakout session.’”

Brooks has effectively described himself in 150 words. His takedown of a “thought leader” is vague and nonsensical. The know-it-all tone is far more irritating than the article’s complete lack of substance or clarity—you can hear the nasally whine in every empty sentence. And yet, this is a vital piece of print, as Brooks couldn’t be more oblivious in outlining everything that makes him an insincere, ineffectual, and jealous writer. Brooks’ “thought leader” goes to Africa just for the Facebook Likes, gets paid to talk publicly with conviction about nothing in circles, and uses corporate lingo like “space” and “powerless lunch” (?) in a way that probably seems fey—perhaps “faggy” in his mind.

Are you doing okay, man? Does someone have to talk this guy off a roof? Jeez, should I feel bad? Maybe after something like this: “By his late 50s, the Thought Leader is a lion of his industry, but he is bruised by snarky comments from new versions of his formerly jerkish self. Of course, this is when he utters his cries for civility and good manners, which are really just pleas for mercy to spare his tender spots.”

What could’ve inspired this veiled epiphany? He ends by saying that death smells “cruelly [...] like reverence.” Comfortable and without anywhere higher to go, Brooks can see the rest of his life pretty easily, and that’s gotta be depressing, especially when you have as little influence and imaginary power as he does. He ought to retire.