Here's to you, stone-faced, sign-language imposter at the Nelson Mandela tribute. 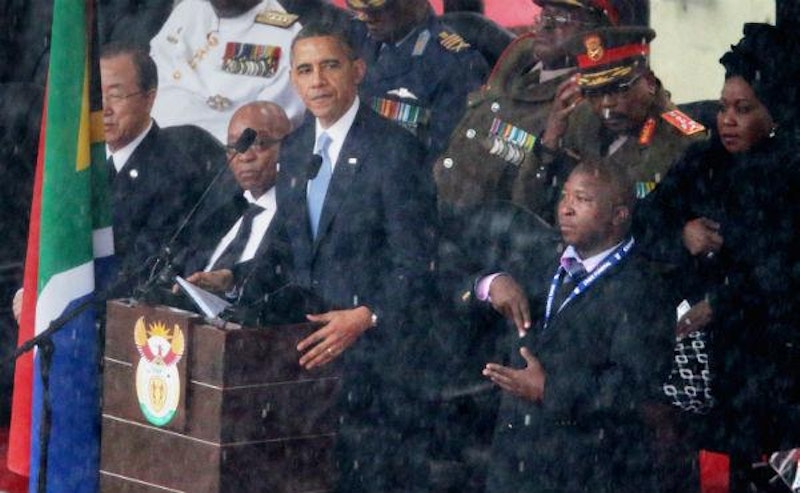 Do you know where you were on February 25, 1998? I do. I was in college, lounging in my girlfriend's dorm room; we were watching the Grammys, live, and Bob Dylan—ghostly pallid, fading, gaunt, the dude looked like he was gonna die any second—was onstage, surrounded by young people wearing back turtlenecks, singing some Dylan song or other while cradling a guitar. It was an unimpressive experience, because I wasn't yet a fan; however, after a couple seconds, it became awesome, because one of the turtle-necked young people stripped off his shirt, stepped forward, and erupted in a series of bizarre, dance-like gyrations, as if attempting to freak ol' Bob. The words "SOY BOMB" were written on his chest, and he was soon wrestled off-stage by security, while Dylan continued to perform the song as if nothing had happened. I've watched lots of awards programs over the years, and that's one of few moments that really stuck with me: the random, WTF sabotage of an American icon.

The history of media punking has a long and storied history, from Joey Skaggs' uproarious hoaxes to myriad acts of mischief perpetuated by Howard Stern and his acolytes to culture jamming's multi-faceted inanities. To this pantheon we must now add the unnamed prankster who, improvising a marvelously fake version of sign language, faked his way through the entirety of Tuesday's Nelson Mandela tribute in South Africa. Impossibly stoic and stout of build, he reminded me of a Nation of Islam third-stringer, a disposable member of Louis Farrakhan's traveling retinue. Fittingly, his attention was diverted all around—everywhere except for the speakers he was supposed to be serving—as though he were searching for a potential assassin in the crowd. His flying hands seemed to move almost independently of the rest of his body, an insular vocabulary of insertions, sweeps, and gestures suggesting a parody of what most understand actual sign language to be; it was as if the man were instructing mourners on the best method to use for picking, storing, and consuming some fruit.

A memorial is a lot like a funeral; it's an event where attendees are listening to other people talk movingly about the departed even as they tend to their own emotional health. Everything is muted and solemn, and nobody's especially sharp. One imagines, too, that with a crowd made up of sign language literate people from all over the world and all over Africa, there was a willingness to cut the signer some slack, in case he was signing in an obscure tribal dialect. These are the only logical reasons I can come up with for why nobody spotted this guy for a fake until the event was over, why nobody called him on his bullshit or wrestled him and beat him senseless with sticks. Right now, someone is having his or her head handed to them. It's not like we're talking about some penny-ante mini-mall dedication ceremony led by some local officials; this was a huge, important happening attended by hundred of heads of states and dignitaries from around the globe, so security planning and checks must have been absolutely insane. There were probably snipers and steroid-crazed plainclothes plants everywhere; there were definitely thousands of troops locking everything down.

Overall, it had to be as thorough as it was breathtakingly expensive—and yet, some suited yahoo nobody can identify winds up on stage just feet away from President Obama, dissembling madly, close enough to stab him with a poisoned dagger. Of course, all of this would be ghastly to contemplate if it wasn't so weirdly, darkly hilarious. If anyone happens to see this guy, buy him a Pilsner—and then kick him in the nuts.