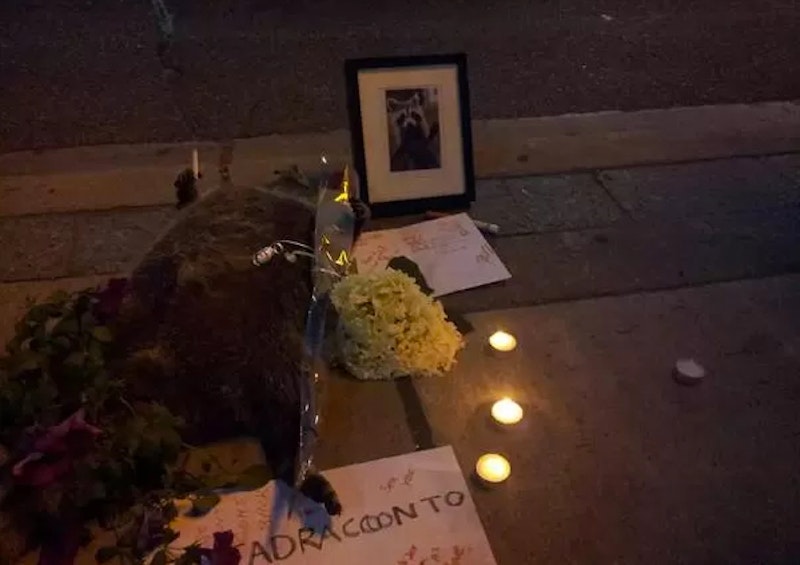 Tomorrow is the one-year anniversary of the incident in which a raccoon climbed to the top of a tall crane in Toronto and defecated. I know, strictly speaking, this was not an important moment in relations between human and non-human species, but I think there’s more to be said for paying attention to the animal moments that amuse and delight humans than the more highbrow animal welfare activists these days sometimes acknowledge.

People need motivation if they are to take other species seriously, and if zoos and serious nature documentaries don’t always do the trick in this hectic media age, we shouldn’t be too quick to dismiss the vast potential of humor and the absurd. Toronto, you may recall, was also the site of that spontaneous memorial shrine for a dead raccoon, who by day’s end had acquired all manner of offerings and online eulogies. Good for him, I say. And good for the empaths of Toronto.

If the long-term, sci-fi-like grand vision for animal welfare activists is a world in which greater sympathy is shown between animals who are not of the same species, the activists might find themselves closer to glimpsing it in YouTube videos of surprising interspecies friendships than in animal rights treatises or (all too disappointing) clips of animals constantly eating each other. Call me unscientific, but I must confess I had no idea growing up that iguanas and cats could be buddies until I started seeing such things occurring among pets raised together in human households.

By now, many of us have probably seen similarly shocking—and in a weird way encouraging—footage of, say, that tiger who decided to befriend a goat instead of eating him, the young rhino who likes to bounce along in imitation of a lamb, or the lion and tiger and bear who were liberated from an abusive home and surprised rescuers by continuing to enjoy each other’s company and growing anxious only if separated (as when the bear, named Baloo, had to go to the doctor; he was okay).

And those of you who, blindly, dislike cats and claim they’re all mean need to marvel at cat patience by watching them endure mockery by the mischievous birds some of them live with.

My deeper point here, though, is that while the intellectuals, as usual, look to abstractions and anger for guidance, there may be a monumental, planet-sized wellspring of largely untapped sympathy and symbiotic chumminess out there in the (normally utterly brutal) animal kingdom. If YouTube videos have taught me anything, it’s that being raised together (and thus experiencing each other as tame quasi-siblings) is probably the key to lifelong interspecies tolerance. Sentiments are not to be lightly discarded as incentivizing tools, as the ultimate incentives expert, Adam Smith, well understood when he wrote Theory of Moral Sentiments.

Likewise, you can take the mature and realistic view that hunting is sometimes necessary and still be a bit wary of the sociopathic streak evinced by overly-proud displays of once-living, once-majestic big game carcasses such as the infamous Cecil, for all the complex side issues that hullabaloo raised. (Even as a libertarian, I can say the same of some aspects of gun culture more generally: I don’t want the government to disarm people, and it’s great if you are an expert at self-defense, but itching for a fight is more perverse.)

A few decades of taking animal friendship instincts and their potential enhancement much more seriously might do us good—at least until the robots destroy all organic life, I mean.