No Interest in Chrome Country

Where’s the hook in an anonymous corporate headquarters in Lower Manhattan getting $6 billion in tax breaks? 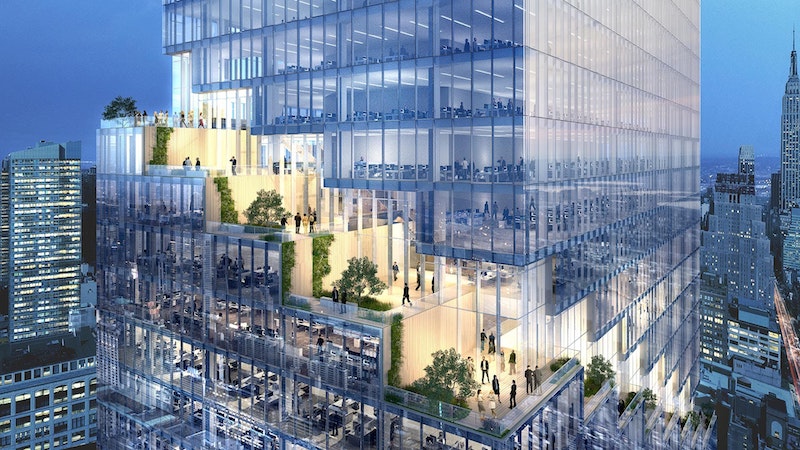 Where will the Alexa drone land? Not in my backyard, or New York—not after the city’s government, hijacked by activists, suddenly hedged in negotiations with Amazon and were pissed when it all fell through. They have Arlington and Seattle now, why not Detroit? Kick out those roaming feral dogs, build luxury condos and bring in young urban professionals to turn the city into another glass coffin like Manhattan already is. I never spent much time in Long Island City but a corporate headquarters is a corporate headquarters anywhere you put it. They all look the same: chrome country.

Meanwhile, in the city that runs itself, other corporate coups are busy being born: “Amazon’s Tax Breaks and Incentives Were Big. Hudson Yards’ Are Bigger” by Matthew Haag was the top story on The New York Times website on Saturday. These public outcry postscripts are so common—and familiar, by now—but there’s nothing sexy about this: “At Hudson Yards, the expansive real estate development that is about to open in Manhattan, seven floors of retail are occupied by Fendi, Dior, Neiman Marcus and other high-end shops. Major corporations, including WarnerMedia and L’Oreal USA, will have their headquarters there. In the luxury residential buildings, one-bedroom apartments will rent for at least $5,200 a month—or you can buy a two-floor penthouse condo for $32 million."

Enraging? No, par for the course—and nothing salacious to grab onto. “New York was riveted for weeks by a debate over whether Amazon should receive $3 billion in tax breaks and other incentives in return for setting up a headquarters in Queens and creating 25,000 jobs. But with far less public attention, the city government has for more than a decade been funneling even more aid to Hudson Yards, a 28-acre complex of gleaming office buildings and luxury residential towers that is one of the nation’s biggest real estate projects in recent years.”

How to get people to pay attention and care about stories that aren’t sexy or exciting? Bernie Sanders is a “political rock star,” a very sad and low bar, but he’s also a narrow-minded technocrat, and he can make anything sound compelling, no catchphrases necessary. He screams, his voice gets hurt, he spits a little, his face gets red. People may be watching, but are they retaining any of the statistics or mathematical breakdowns he trots out? Sanders would only make Hudson Yards sexy by proxy, but a corporate park with diffuse branding is hard to sloganize. A major structural shift in our economy and a return to trust-busting are the only things that could stop more Hudson Yards, and no one on TV wants that to happen.

They’ve always had it out for the socialist from Vermont. Check out this recently uploaded interview with Phil Donahue on The Today Show in 1981, shortly after Sanders won the Burlington mayor’s office by 10 votes. They come back from commercial with a shot of a nice lake with the title card “Socialism in New England.” Donahue treats him like the semi-fringe curio he remained until late-2015, prodding him about socialism and ending on “Are you a capitalist?”

“No,” Sanders replies—after already explaining his disdain for the “authoritarian” Soviet Union. An Amazon headquarters is easy to understand, but a faceless amalgam of various corporations huddled in a Neo Tokyo development at the bottom of Manhattan is a lot harder to demonize because the villains are so diffuse. I’m not concerned about Sanders’ age, he’s as lucid if not more so than he was in that 1981 interview.

“There is something to be said for free enterprise on a local level… But we don’t live in a free enterprise society. We live in a corporate capitalist society, where in virtually every single industry you have giant multibillion dollar corporations competing, driving the small businessman out… Do I believe that the profit motive is fundamental to human nature? The answer is no. I think the spirit of cooperation, you and I can work together better rather than having to compete against each other and destroy one another.”

Donahue grips Sanders’ arm like a daffy child and goes to break smug and self-satisfied, assured he’s put this nut in his place on national television. It’s striking to watch today, and we’ll be seeing a lot more condescending dismissals like this as Harris and god-forbid Biden get the knives out for Sanders. I’m sure they’ve already penciled in the date on their calendars, perhaps this Friday? But is the Ides of March too soon to erase the most popular American politician besides Donald Trump?