Will Republicans Snub Obama On the State of the Union Address?

It’s up to Congress to invite the president to speak. 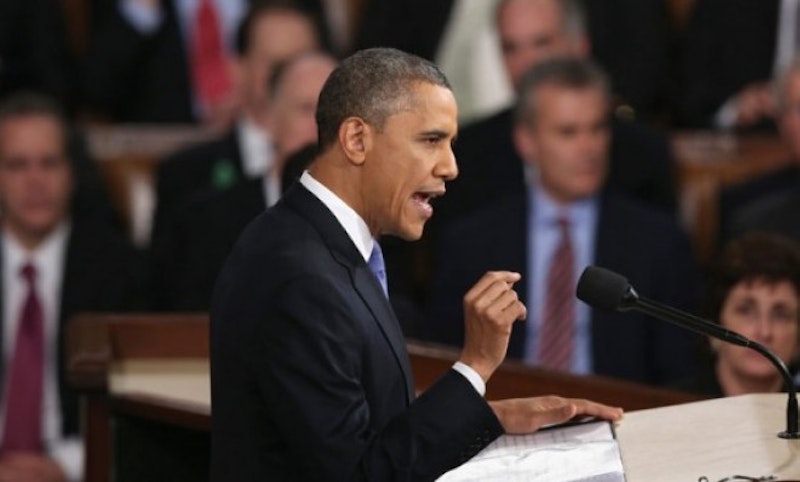 More than two weeks on, Republicans are still fuming about President Barack Obama’s executive orders on illegal immigration halting millions of deportations. It’s unclear what, if anything, can be done to reverse the President’s acts. But some congressional Republicans have at least a symbolic move in mind—cancel the State of the Union address.

Rep. Paul C. Broun says Congress simply shouldn’t invite Obama to deliver the SOTU in the House chamber. Broun, a Georgia Republican who is leaving Congress after an unsuccessful Senate bid, is actually among the tamer voices on how best to retaliate against the Obama White House over immigration. Other conservatives have mentioned censuring the president, impeaching him or suing the administration.

Constitutionally, Broun and co. are correct that Congress is under no obligation to invite the president to deliver the SOTU. According to the Constitution, the president “shall from time to time give to Congress information of the State of the Union.” For a good chunk of American history, this led the White House to deliver a written report to lawmakers. It wasn’t until President Woodrow Wilson’s tenure a century ago that in-person SOTU speeches became the norm.

Of course that was before television cameras and social media. These days SOTU speeches are highly-choreographed affairs with lots of sizzle and little steak. Few proposals outlined become law. And depending on which party holds the White House, the nine p.m. events can seem more like partisan pep rallies than substantive policy discussions.

Congressional Republicans aren’t the first to question the necessity of a president delivering a SOTU address in person. A 2002 West Wing episode has the staff of President Josiah Bartlet considering postponing or even cancelling the speech. “He's required to give Congress information on the State of the Union,” says White House Communications Director Toby Ziegler. "If he buys Congress a subscription to the Wall Street Journal, he's fulfilled his constitutional” duty.

Still, in the case of Obama, House Speaker John Boehner isn’t too hot on the idea of making President Obama mail in his speech. Asked about the idea during a recent press conference, the Ohio Republican gave a back-handed response, reports The Washington Post. “Listen, the more the president talks about his ideas, the more unpopular he becomes. Why would I want to deprive him of that opportunity?”

Liberal writers contend the optics would just be too bad for Republicans. MSNBC's Steve Benen notes: “In 1999, a Republican Congress welcomed President Clinton to deliver a SOTU even after he’d literally been impeached, despite the fact that the GOP-led Senate was still weighing whether to remove the sitting president from office.”