Hint to the challenger: Churchill never said “me too.” 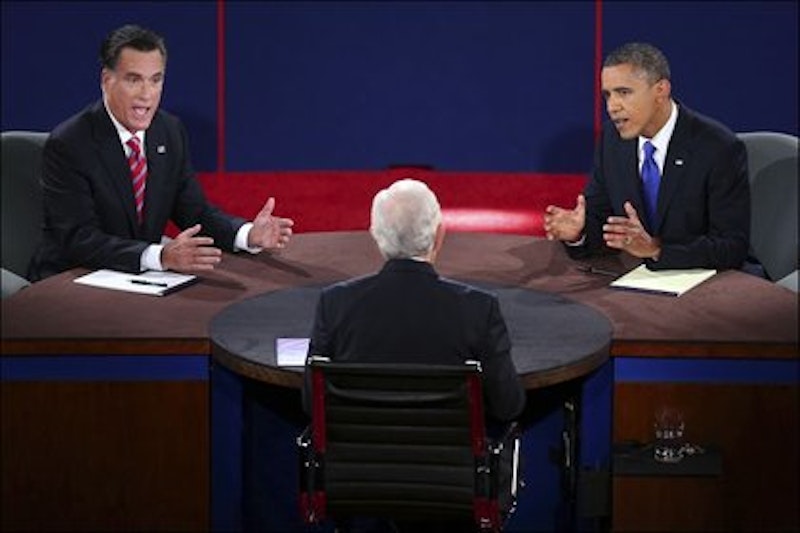 Benghazi isn't a big deal after all. Last night President Obama talked about Libya more than Mitt Romney did, with a focus on how U.S. force helped knock Muammar Qaddafi into the ash can. Romney got tired of the whole subject. “It’s wonderful that Libya seems to be making some progress, despite this terrible tragedy, but next door, of course, we have Egypt,” he said. True, Egypt is bigger and as yet it's still figuring out democracy, with results that make Americans nervous. But Libya is now an occasion for Romney to say “wonderful.” Not long ago it was a reason for him to talk about “unraveling,” as in the alleged unraveling of Obama's Middle East policy. Maybe in a little while Romney will decide that Egypt is basically okay too, all things considered.

If we can judge by last night's foreign policy debate, Romney now thinks the Obama approach to the Middle East is more raveled than unraveled. “We’ve got real gaps in the region” was the best he could do. A lot of his time went to agreeing, something the president noticed. “You know,” Obama said at one point, “there have been times, governor, frankly, during the course of this campaign, where it sounded like you thought that you’d do the same things we did, but you’d say them louder and somehow that would make a difference.” The prompt for this remark was Iran. The country is the direst menace Romney can see on the world stage. Yet his answer to it is the one Obama has already put in place: sanctions to stop Iran's nuclear program.

After all the pealing of bells about an existential threat, the best Romney could do was say that Obama should have skipped going to France and saying too bad about the freedom fries. Yes, Romney fell back on the apology tour, and in its feeblest form. Obama visited Turkey, Egypt, Saudi Arabia and Iraq, Romney said, “and then in those nations and on Arabic TV you said that America had been dismissive and derisive.” But no, “dismissive and derisive” was from a speech Obama gave in France, one where he said we've been jerks about Europe sometimes and Europeans have been jerks about us. If only Obama hadn't said that, Iran might have knocked off trying to build a nuclear bomb. Oh well, the pivots of history.

Where is America weak these days? Afghanistan is one place to look. Obama dragged the war out rather than leave fast, and now the Taliban chugs along while we stagger for the exit. But that's not to hear Romney tell it, or at least not last night. “We’ve seen progress over the past several years,” he said. “The surge has been successful, and the training program is proceeding at pace.” And just like Obama, he guarantees that we'll leave in 2014. Say anything about our failure in Afghanistan and you'll sound like you want to stay and straighten things out, something that nobody in America wants us to do. So there goes another issue.

“We don’t want another Iraq,” Romney said last night. “We don’t want another Afghanistan.” From a policy point of view, those may be the most telling words of the evening. Romney is surrounded by men who helped give us the foreign policy of George W. Bush. Ten years after they had their way, the one thing we know for sure is that we don't want more of what they gave us. That left their student, Romney, in an awkward situation. He responded by talking about peace and how we should be helping girls. “We can't kill our way out of this mess,” he said, which is a wonderful line—something a Republican would never really believe but a Democrat could never think of.

Who likes drones? Anyone who can get into a presidential debate. The moderator, Bob Schieffer, asked Romney what he thought of them. Romney stopped talking about peace long enough to say this: “Well, I believe that we should use any and all means necessary to take out people who pose a threat to us and our friends around the world. And it’s widely reported that drones are being used in drone strikes, and I support that entirely and feel the president was right to up the usage of that technology and believe that we should continue to use it to continue to go after the people who represent a threat to this nation and to our friends.” Firing off drones won't lead to endless wars of occupation, or at least not as directly as invasion will. Therefore they're a safe call even for a candidate who doesn't want anyone thinking about his itchy trigger finger.

On the matter of drone strikes, the journalist Jeffrey Goldberg tweeted that the debaters should have been asked if killing children really helps the fight against Islamism. Schieffer wouldn't ask a question like that. Of course, Barack Obama might, but his answer is currently leaving craters in northern Pakistan.

The election—where is it headed? Right back to the economy. Romney talked about the subject as much as he dared, and Obama was happy to wade in with him. Thus we heard more about the John and Abigail Adams Scholarship than we heard about global warming, the Eurozone or the future of Cuba. (The scholarship is for kids in Massachusetts, who do well in school, and Romney was right—his administration came up with it.)

The savvy inside word just now is that all Romney needed was a draw. The argument goes that in the first debate people decided that Romney was a smart, capable fellow and not twitchy or obnoxious. This time around he just had to show he could sit next to a president and talk about foreign policy without crawling off the stage afterward. With these thresholds passed, he's free to be the change agent who (supposedly) can rescue us from a bedraggled economy. Post-debate polls indicate that he drew a loss, but who knows. The economy is still sickly, and that may be all that counts.

Theater review. Obama, having learned the lesson of the first debate, laid into Romney at every chance. At least once he made his challenger look like a sneaky goofball—the droll little explanation about horses, bayonets, aircraft carriers and submarines laid bare Romney's dodgy talking point about there being more ships in the Navy 95 years ago than there are now. On the other hand, Romney's skittering voice never speeded up to the track-jumping speed familiar from the Republican primary debates. His tics never reached the familiar but frightening point where his eyelids slam together over and over again (what in less flamboyantly afflicted people would be called blinking).

Romney doesn't know that Iran is not next to Syria and that it is next to the Persian Gulf, which raises questions about whether he knows where Iraq is, but most of the time he sounded like he at least thought he knew what he was talking about. For the trusting that may be enough. Or, as Brit Hume said afterward on Fox News, the Romney he saw was “smooth, fluid and well-informed about all the matters that came to hand.”