The Atlantic writer says it’s the “quants” vs. traditional pols. 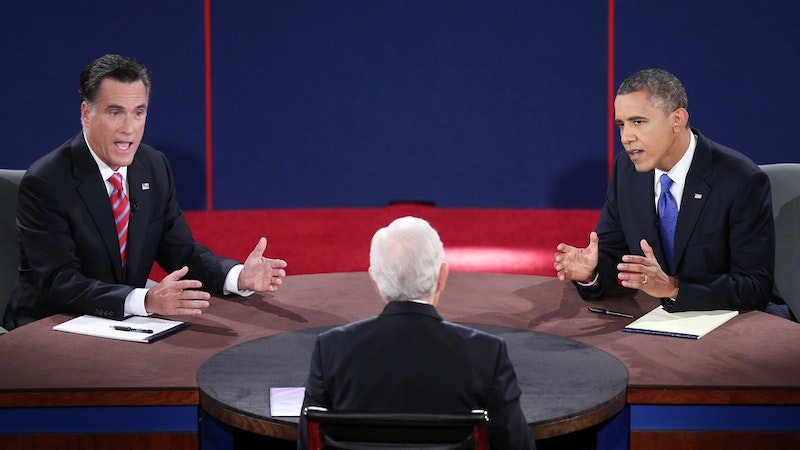 Sifting through the scads of post-debate stories today, there was just one that stood out: James Fallows’ “They Can’t Both Be Right: ‘Savvy’ Experts vs. Polls” in The Atlantic.

Fallows is a reliable Democrat and is certainly horrified at the thought of a Mitt Romney presidency, but, as is his wont, his article was far more dispassionate than his fellow pundits on both sides of the political spectrum. Although Fallows follows the liberal line and regards New York Times statistician/deity Nate Silver as the gold standard of poll analysts, at least he allows that on Nov. 7, one camp (either the pundits/reporters who smell “in their gut” a momentum shift to Romney, or the Democrats who hew to the theory that Obama is, if not a cinch, a prohibitive favorite to win 270 electoral votes necessary for reelection) will be discredited.

I’ve no idea who will win, and my only observation on that score is wholly unoriginal: what was once apparently an Obama rout in September is now even money. But this I find interesting: if Romney loses, how does that impact the credibility of Scott Rasmussen, the prolific pollster distrusted by the left who’s currently showing a Romney lead? Will he be disqualified, or at least dismissed (much like onetime polling guru John Zogby) in the next round of elections? And what of the Gallup Poll, still showing a Romney lead? It could be sunset for that political barometer, which has been wrong just twice since 1948: the Truman victory that year, and in ’76, when it predicted a slim win for Gerald Ford.

Fallows boils it all down:

In a way this is a perfect test case of the Michael Lewis Moneyball hypothesis. Apart from Silver’s own background as a sports-stats analyst, we have an exceptionally clear case of people judging from their experience, their “bones,” their personal instinct, etc. that things are going one way (like veteran scouts saying that a prospect “looks like a Big Leaguer”) while data (on-base efficiencies in one case, swing-state polls in another) point in an opposite direction.

It’s a big moment for Silver: this is just his second presidential round of analysis—and ’08 was a lay-up—but if he continues to go against the grain and is correct (today he says Obama has 70.3 percent probability of winning), he’d likely be accepted as the single most important man in the polling business. And if Silver still has Obama’s likelihood of winning at, say, 65 percent on Election Eve, and the President loses, the Democratic idol will have his clay feet exposed.

In contrast to Fallows, The Daily Beast’s Michael Tomasky is near apoplectic about the divide between “reality” (Silver’s model) and distortion (the Romney team’s projection of momentum). Saying that today, Oct. 23, “may be the most important single day of the campaign,” Tomasky rails against not only Republican partisans but the mainstream media (traditionally Democratic) as well, for buying into the supposed Romney myth.

He writes: “This is what’s maddening to liberals about what Romney has done since the first debate. He’s constructed a new reality about himself and he’s gotten away with it, mostly. Specifically, it’s that he’s flip-flopped on all these things without the remotest hint of acknowledgement that the old positions even existed… A complete lie. And a real f-you, by the way, to voters who’d like to know why he changed his mind, except why bother, really, since there’s no substance there. He changed his mind to win, period.”

Tomasky’s not stupid or a novice in covering politics. But this election has taken him over the edge. Really, how can he be so incredulous that Romney and his team are trying to win an election, and attempting to manipulate the media? Would that be a first?

I do hope Romney pulls off an upset, mostly because I believe he’ll be a superior president than Obama on economic and foreign issues. I don’t buy all his social values garbage that he peddles to assuage part of the GOP base, but Reagan did that, too. But an undeniable bonus if Obama loses is the hysterical reaction from the left-wing media that’s sure to follow. It may not rival Bush/Gore in 2000, but it’ll be nasty.