Mitt Romney Is the Great Schmuck of History

The thoughts liberals have when they see that Quinnipiac poll from Ohio. 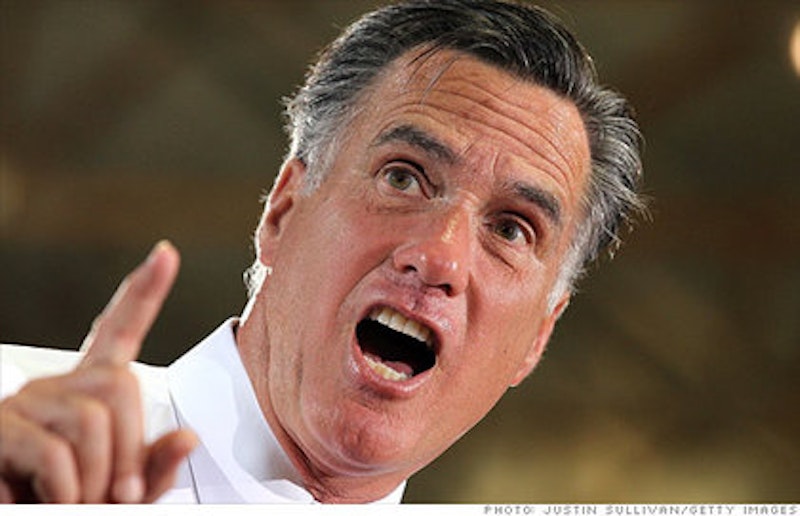 The debates aren't going to help Mitt Romney. They may hurt him a great deal, they may be a wash, but they won't help him. A fundamental is at work here. To be around Romney is to feel pain: He twitches so badly, but he won't go away. That will be the prime fact of the debates, the experience no one can escape, and it will sabotage any attempts he makes to pin Obama on the Benghazi mess. When Romney has the facts, he'll seem petty; when he doesn't (and that could be often) he'll seem disgusting: a stuttering, sidelong creep who looks for moments to take potshots.

Typically, Romney has prepared the way for the president to take it to him hard. In a run-up interview to the debates, he announced that he thought Obama wasn't truthful, and that he, Romney, would have to act as fact checker. Now the president can say he's playing fact checker too. He can do so while talking about Romney's reputation as a liar. This might take some art, but it will take a good deal less now that Romney has made the charge first.

Romney's combination of ill will and haplessness makes him seem perfect, an ideally formed fall guy to get knocked over in a liberal sweep. Yes, there's talk. Liberals are wondering about a big win in November. Not so much a landslide, since those don't come around these days (though, hey, 54 percent might be nice), but a running of the board. The White House again, and not just keeping the Senate but adding a few seats, and somehow taking a majority in the House. Such a moment would make sense from so many angles. But the sense isn't what floats the idea. It's not a notion that you reason yourself into. You just say Look at that Quinnipiac in Ohio! and the thought bubbles up: Yes, now history is heading right; the signs fall into place.

Republicans had the same thoughts in September 2004, and again in November of that year. But the big dreams didn't pan out. Of course, Republicans were wrong about everything except campaign management and p.r. Do what they did to policy, and gravity will find you out. Liberals are different. We're right about most things. Of course, the exceptions can be killers, and we may be about to find out what they are.

For now, and for once, liberals have the view of history that comes from being on top. All is working out as it should, as it must. Signs pile up. Romney brings shit down on his head for saying on tape the kind of thing his voters say on the golf course; his voters are no longer the public at large. The biggest sign of all: We're winning with 8.1 percent unemployment. That's how bad the Republicans are. Their worthlessness is so well established with the public at large (not that rump faction of oldies who show up for off-year elections) that we're headed for a sit-down-and-shut-up moment. The voting public will park the Republicans on a stool, shove them in a corner and give us 10 years of unmolested rule to get the country straightened out again.

It could happen, it could not happen. But look at Nevada, Iowa, New Hampshire—Romney was supposed to be ahead there. Instead we are. It's been a beautiful three weeks, and I'll always remember this feeling of the wind in my hair.

Noonan moment. An overlooked gem from the column in which Peggy Noonan suggested that Romney was best seen when surrounded by enough other politicians to block the view (“Mitch Daniels and Jeb Bush, and the young ones, like Susana Martinez and Chris Christie and Marco Rubio,” they should all be up on stage with Romney, always). In that column she had to take Romney to task for a poorly run campaign. But he was still her candidate so she had to praise him: “Romney is known to be loyal. He sticks with you when you’re going through a hard time, he rides it down with you. That’s a real personal quality, a virtue.” But the counter-example of winning behavior (fire the incompetents!) had to come from Ronald Reagan, the great winner. And it was a good one: Reagan fired John Sears, his longtime campaign manager, after hitting a bump early on in 1980. But this meant that Reagan was lacking in at least one “real personal quality,” or virtue.  How to square the circle?

When somebody can write a sentence like that, the end is near. She's so squeezed by piety on the one hand, and collapsing circumstances on the other, that she's reduced to a kind of adult baby talk. It's a sign, I tell you.