Why Legion Is the Most Compelling Show on Television

Legion takes aim at our alibis. 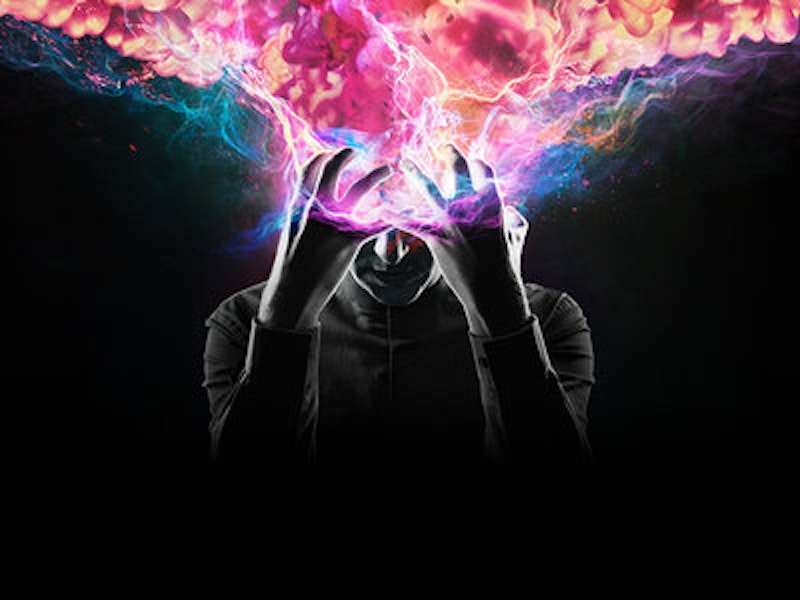 In his film Annie Hall, Woody Allen tells an old joke about a man who has a crazy brother. "Doctor, my brother thinks he is a chicken," says the man. "Why don't you bring him in?" asks the doctor. "I would," says the man, "but I need the eggs.”

In Annie Hall, this joke is a metaphor for the priceless madness of being in love, but there’s another way of reading it that cuts closer to the bone. Consider this: the sane man is effectively imprisoning his brother in a terrifying delusion in order to get what he wants. He is the villain of the joke. If that seems both spooky and funny to you, then you need to get your hands on some episodes of Legion.

Legion picks up where one brief conversation in X-Men: Apocalypse left off. The young Cyclops, terrified of his powers after sawing a tree in half, says his laser-beam gaze "doesn't feel like much of a gift." "It never does, at first," replies Professor Xavier. So it goes with young David Haller, whose psychic abilities land him in a mental institution after years of mounting self-destruction. He’s an addict and a suicidal depressive, infested with psychoses. The most he’s been able to do, as a telekinetic, is shred an entire kitchen, until nothing is left but snowdrifts of cereal, cutlery in the walls, and bright plastic packages sliced into confetti. The only spark of life inside the psych ward is his friend Lenny, played with gleeful abandon by Audrey Plaza.

At this point the narrative seems pretty familiar; it’s an anti-psychiatric story along the lines of One Flew Over The Cuckoo's Nest, with Lenny as McMurphy and the requisite complaints about drugs that numb you and dumb you down. Wesley has to throw away his pills in Wanted, and so does Quentin Coldwater at the beginning of The Magicians. Go ahead, kids! Chuck your meds! (Or at least resent them.)

Nothing so simple is at work here. For one thing, in this show, the world isn't a gigantic psychiatric hospital trying to keep its drudges in line. The world wants David to use his gifts: there’s an entire secret division of the government responsible for bringing in mutants and exploiting them (or else killing them). They won't let him stay cooped up in the hospital. He comes with them or else.

He escapes, but later in the first season, David is back in the same mental hospital, and announces that he’s basically happy there. He’s learning to enjoy the little things, and has a girlfriend. He doesn't miss the chaos of being a mutant-in-training. Again, someone complains, and this time it’s the little group of outlaw mutants who saved him from the government's kidnapping attempt. He’s powerful, and they want his help, and they can't allow him to putter along in the padded world of the hospital. There is something desperate and suffocating about their notion of brotherhood.

Lenny, David's supposed liberator and sidekick, turns out to be the worst of all. She’s actually a psychic parasite; the reason she's always with him is that she's feeding off his powers. Lenny represents the friendship of the addicts who stay by your side when you're shooting up; she represents the friendship of the patients in the mental hospital who don't want to see you leave. She is the dark side of David's mutant buddies. Symbolically, Lenny is created by David's gift; if he weren’t a mutant, she’d have no reason to hang around. She personifies the warping effect of his specialness on his world.

David also has a sister (not by blood, but by upbringing). Simply because she’s his sister, she’s kidnapped, imprisoned, tortured, teleported, and cut off from all of her other loved ones. When David asks, "Are you alright?", his sister hesitates before answering, "Yes." There’s an ocean of suppressed agony contained in that hesitance. What does it mean to be the sibling of a gifted, mutant child? The fledgling show Supergirl tries to capture some of that dynamic as well, but it's not on Legion's level, and its family drama feels like a whiny distraction from the ultimate battle of good versus evil. In this show, on the other hand, there is no "ultimate good" without sanity, and everything about mutation erodes that tenuous inner balance in mutants and "normals" alike.

In the superhero narratives of Spider-Man and Superman, there is a single figure (the father figure) who gets sacrificed to the hero's gift: Uncle Ben and Jonathan Kent, respectively. In Legion everyone around David is Uncle Ben, even his would-be captors—after his rescue from "Division 3," we catch up with the head of Division 3, who has been horribly mutilated by the explosion that clears the way for David's escape. The show's willingness to feel his pain as he sees his burns for the first time is typical of its capacity for compassion and surprise.

When the Avengers get reprimanded for the collateral damage they've inflicted, in Captain America: Civil War, it's a cheap plot device. The audience doesn't buy it, since we know the Avengers were preventing much greater evils. In Legion, however, it’s impossible to "add up" the emotional and literal costs of David's gifted life without going into the red. Loving him is incredibly dangerous, and that’s what makes this new show so good. His friends and family don't love him because he saves the world. They love him because they always have, because he is unique, and because they’re loved by him in return. In Legion, the capacity to love battles the desire to exploit or dismiss vulnerable, gifted people. As witnesses to David's ordeals, and to the scars he leaves on the imperfect human beings around him, we in the audience can see how frustrating it is to love him, how difficult it is to understand him. "I would, but I need the eggs"—that’s all it takes to make a villain, so Legion takes aim at our alibis.