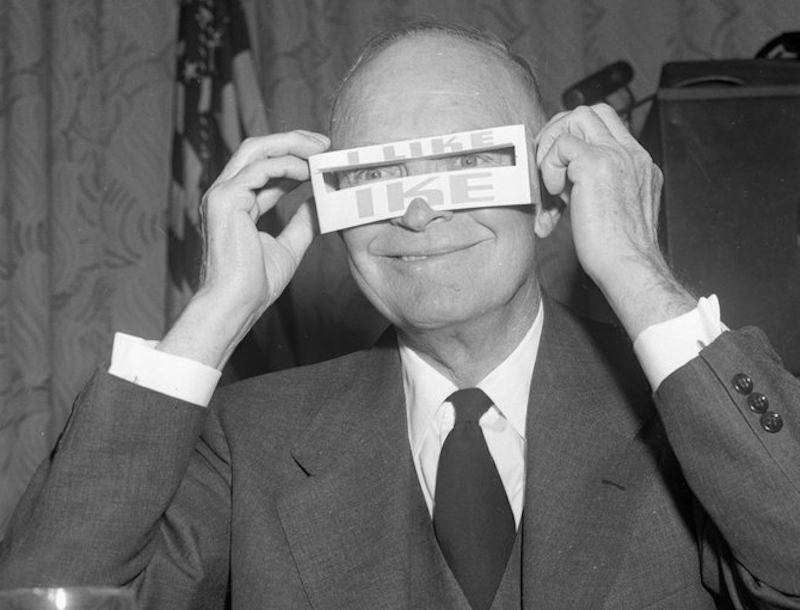 All this hot “not my president” talk lately got me wondering about mine. At roughly six years old, I decided I liked Ike, though all the adults I knew favored Stevenson. Yeah, you likely need liver spots to know who I’m talking about, but hang in if you don’t.

Dwight David Eisenhower was the 34th president of the United States when I hit first grade. I knew that because I was already a news hound, the biggest fan of the original Today Show starring horn-rimmed host Dave Garroway and house chimp J. Fred Muggs—no kidding, a live chimpanzee on live TV dressed up in bib corduroys and funny little sneakers who could ride a tricycle and turn his lips inside out. Oh man, I thought J. Fred was great. And while I didn’t think quite as much about Presidenteisenhower, I liked him too.

By the way, because my earlier childhood was largely immersed in New York City TV, Ike’s local counterpart was Mayorwagner. What did I know? Maybe they were one-name celebs like Cantinflas and Capucine. Anyway, it took awhile to get the demarcation between Dwight Eisenhower and Robert Wagner and their respective offices.

The 1956 presidential election was about that time and the possibility of a new POTUS was both exciting and unsettling. Presidentstevenson just didn’t ring true. Plus Ike’s opponent’s first name Adlai was weird, like some silly Times crossword puzzle oddity my parents might bandy about the Sunday breakfast table. No fool, with Christmas coming in a couple of months, I kept my politics to myself and liked Ike when nobody was around.

Okay, so history got me off the hook. MY president remained in the White House, we had the Big One in our back pocket and nobody messed with us, if you didn’t count a certain spot of unpleasantness in my schoolyard, but that was courtesy of Sal Sanflippo, not Nikita Khrushchev.

By 1960, like him or not, Ike was outa here and Dick Nixon was likeable as ringworm. Sure, JFK registered considerably more than likeable. Funny, war hero, he and Jackie looked like movie stars. For all that, it took a decent interval before Presidentkennedy rolled off the tongue. And even then, independent of personalities or the most remote political considerations, I knew Ike and Jack was close, but no Dutch Master like Presidenteisenhower, if only short by a scoash.

Post-Kennedy, they’ve all been pretenders to me, ranging from able fakers to the sublimely preposterous. It’s been a conga line of substitute teachers and the continuous disappointment has frankly nothing to do with ideology, substantive issues or the way they part their hair. Well, granted, there was Reagan with the hair. And Carter with the sweater. And then Bush Junior with that look on his face like he just peed in the pool. And then… along came Trump. Please. I won’t have any of it. Where do they get these guys? Are they bred in some Unpresidential Sea Monkey tank? Come on.

Perhaps for the sake of a joke I’m too harsh. Seriously, I think it has more to do with the first president dumb luck pops up in your fresh young field of vision. Oh yeah, next time you’re at a séance, ask the late animal scientist Konrad Lorenz. It’s a flavor of behavioral imprint, something like a duckling mistaking a TV dinner tray for its mother.

Not for nothing, I wouldn’t be overly confident that your French casuals-wearing Country Day babies won’t grow up with a Presidenttrump imprint rattling around their noggins.

I know, you swaddled them in 500-thread count Egyptian cotton diapers, fed them artisanal strained peas, and made sure their friends were children of generally tasteful parents, even if you’re not so sure about that family down the street with those ghastly inflatable Christmas decorations. Never mind. Gonna take more than a blowup Rudolf The Red-Nosed Reindeer to make Donald your kids’ POTUS, right?

Not that your kiddos would say anything to you about it. They’re no fools. Birthdays are always coming up. The holidays loom large, no matter the season. Think of all the stuff for which your parents lacked a need to know.

Could be worse. Your kids could ask for $500 dollars and a forehead tattoo. Of who?  Surprise, it won’t be Che Guevara.