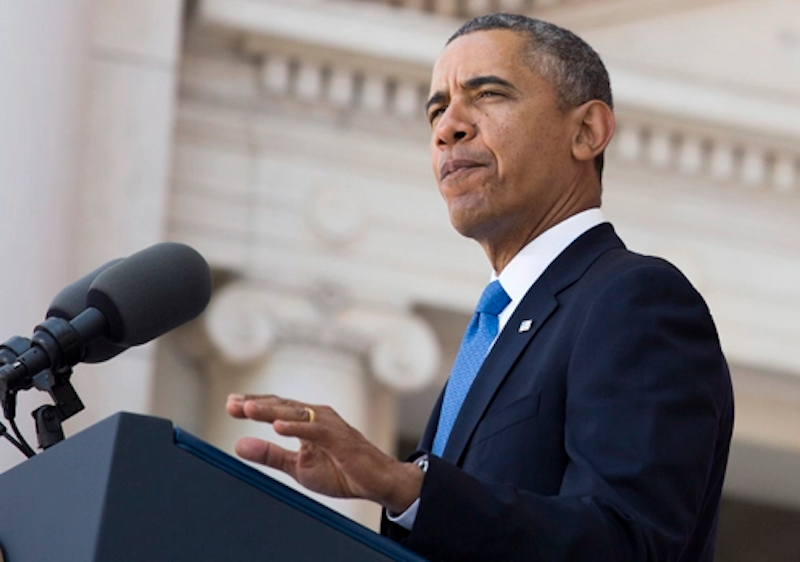 With his latest book, subtitled “How Barack Obama Defied His Critics and Created a Legacy That Will Prevail,” Jonathan Chait gives us an ode to Obama's presidency and a prediction that he’s left a stamp on the nation that will live on, despite the fact that the Republicans have the power now. Certainly this was an assertion he was much more confident of before he got surprised by the Trump election last November, but that's his story and he's sticking to it.

Chait’s a member of the large media contingent that fawned over the Obamas when they were in the White House. His reverence remains intact now that they've moved out, which he makes clear just three pages into the book by stating that Hillary Clinton lost in November in spite of, not because of, her association with the nation’s first black president. Clumsy claims like this one, sprinkled throughout his book, make it clear that Chait’s a diehard Obama fan.

After devoting his first chapter to Obama and the issue of race in the U.S., a subject that defies neat quantification, the New York Magazine political columnist then moves on to Obama’s first major tangible accomplishment in office—preventing the second Great Depression. He astutely observes that, despite it being a monumental achievement, Obama would never get enough credit for it. That's what happens when you stop something from breaking, as opposed to fixing something already broken like Franklin Roosevelt did. FDR’s still a hero to many, but this isn't Obama’s destiny.

Government debt is a topic that many normally intelligent people are unable to grasp because they view it intuitively but inaccurately, like they would a household debt. This is how the GOP normally frames the issue, but Americans are lucky that Obama stuck with his Keynesian approach despite the cries of panic from Republican deficit hawks. Chait does a good job pointing out the confusion among Republicans, who employed a motivated revisionism to convince themselves that government spending hadn't saved the economy during the Great Depression. He wonders what would have happened in 2009 if Obama had asked for a bigger stimulus package than the inadequate $800 billion he requested (Congress approved $787 billion) which is a good question, because it was one of his biggest mistakes in office—one that he couldn't shake for years.

Moving on to what Chait sees as Obama's next major accomplishment, Obamacare, the author writes, “Perhaps Republicans will regret affixing the name of their partisan adversary to a measure that provides every American a guarantee against misfortune.” Who knows at this point? The Republicans have made themselves look awful in their efforts to replace the ACA, but Obamacare's still a dirty word to many of them. Chait gives a solid analysis of the woeful state of the healthcare industry when Obama took office, how it's spiraled downward for decades, and how far to the right Republicans have moved on the issue since the time so many of them admired Mitt Romney's Massachusetts healthcare plan. Still, he presents no convincing argument that Obamacare will survive the Trump years, nor is it likely anyone else could.

Chait devotes his next chapter to climate change, detailing the $30 billion that went to green energy companies under Obama, the tightening of fuel efficiency standards, and the role the Obama administration played in China’s successful new energy policies. Chait admits that Obama’s substantial achievements on environmental matters are now vulnerable with Trump in office, but he doesn't go into how Obama bypassing the legislature by signing executive orders directly contributed to the vulnerability. Trump's busy revoking them all now so, yes, that legacy's on thin ice.

Of Obama’s foreign policy, Chait writes that it wasn't transformative. As it was essentially an effort to “slow the bleeding of the Bush years,” there was a negative quality to it. Obama did sign an executive order ending torture, but Trump has expressed his advocacy of torture many times. In fact, The New York Times has published a draft of his executive order designed to bring torture back. Chait admits that Obama bungled the issuance of his chemical-weapons related “red line” with Syria, but leaves it at that. Perhaps Obama didn't want to offend Iran in the middle of the nuclear arms deal, but what then ensued was a humanitarian disaster of epic proportions, most recently marked by the Syrian government gassing its citizens with sarin, an incident that put the U.S. on a possible collision course with Russia. Trump has now made Obama look weak by enforcing the red line that the former President chose not to.

Chait writes that Obama’s foreign policy “succeeded mostly in increments and the avoidance of error,” but the former president's positions on Syria have made significant contributions to global unrest. ISIS got space to grow in, and the resulting refugee crisis has destabilized Europe and awakened dormant nationalistic tendencies throughout the continent. Obama’s decision to do little to prevent the Syrian disaster when several options were available has created a negative legacy that will live on.

Chait got unlucky when Clinton failed to win the election, but that's what happens when you base your book too heavily on a flawed assumption. The premise of a strong Obama legacy is looking shaky now. The recent election wasn't just a rejection of Hillary Clinton. It was at least partially a rejection of Obama too, because Clinton ran as an Obama surrogate and that wasn't enough to motivate voters. For saving the nation from the economic collapse that Republican austerity in response to the 2007-2008 meltdown would’ve produced, the U.S. owes a great debt to Obama. As Chait points out, however, he wanted to be known for a lot more.