Don’t Be So Hard on Sean Spicer

Defending the indefensible is an impossible job. 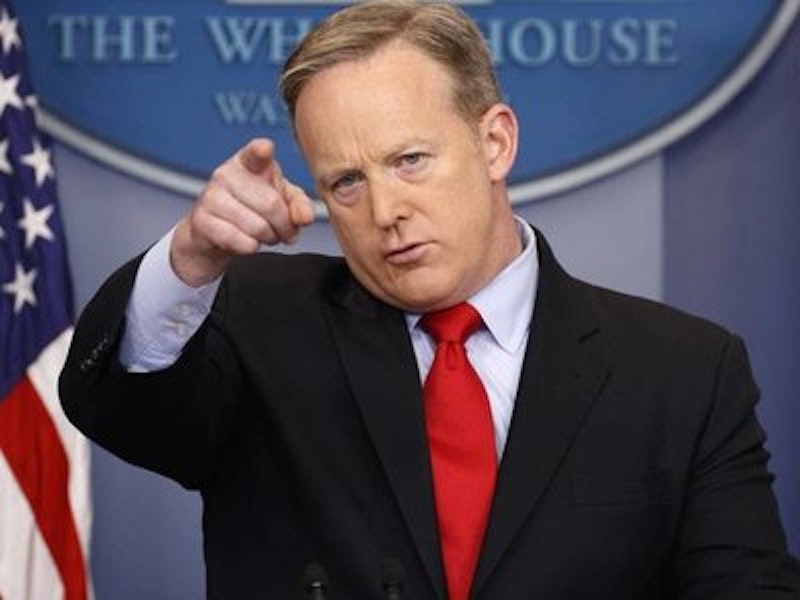 Now that Sean Spicer is in recovery after a full-Oprah apology tour, the White House press secretary has been largely forgiven for playing the Hitler card to advance the cause of his boss, President Trump.

Spicer had meant to shame Syrian President Bashar Assad for using deadly gas on his own people when he said that even Hitler didn’t use chemical weapons during World War II. And he said it as a salute to Trump for dispatching 59 Tomahawk missiles at a strategic airfield in Syria as punishment for gassing civilians, including children. But Spicer said it on the first day of Passover, a 10-day period when Jews celebrate their Biblical march to freedom. The remark provoked an uproar for ignoring history and forgetting that six million Jews were exterminated by Hitler, largely by gas at concentration camps.

Let it be said that the White House briefing room is the toughest room on the planet to play. Not only are the reporters among the top of the heap, but Trump monitors every syllable that emanates from the podium and often scolds Spicer for being too wishy-washy with the quizzical press corps while the world is watching and listening. This, in turn, pushes Spicer to torque up his pugnacity to match Trump’s own punch-back, admit-no-wrong tendencies and often causes Spicer to trip over his tongue. The more intense the questioning the more defensive and flustered Spicer becomes as when, two weeks ago, he dressed down Urban Radio reporter April Ryan for pressing too hard.

Except on this occasion Spicer, with television images of dying babies horrifying the world, let it all hang out in the public confessional, television. “When you’re distracting from that message of [the president’s] accomplishments and your job is to be the exact opposite, on a professional level its disappointing because I’ve let the president down on both a personal level and a professional level, that will not go down as a very good day in my history,” he said during an interview the next day at the Newseum.

Spicer’s been mocked mercilessly by Melissa McCarthy on Saturday Night Live. He’s been pilloried by Stephen Colbert. Magazines have catalogued his blurts and malapropisms. And columnists have observed lapses between the time his brain and his mouth engage simultaneously to produce a complete thought and a grammatically formed sentence. His ill-fitting suits and big-at-the-collar shirts have caught the attention and the half-acid observations of fashion writers. Yet he is generally, but personally, well-liked among the reporters who gather for his celebrated and frequently televised briefings for the static and the scrambled syntax they might produce.

To be fair, Spicer is at the White House podium, a megaphone to the world, at a time when Trump has more positions than the Kama Sutra. Speaking for Trump, as Spicer does, requires constant oscillation to keep inventory of Trump’s many policy epiphanies, following the adage that, like the weather, if you don’t like his positions, wait a minute and they’ll change. For Trump, ignoring Niccolo Machiavelli’s counsel to “avoid abrupt changes in character lest the populous become suspicious,” is undergoing a slow emergence from a populist/nationalist to a centrist/globalist.

Trump’s campaign pledges and promises are shredded and littered all around him. Trump’s recent evolution has comforted the Republican establishment, outraged his base and roiled the markets which jitter at any sign of uncertainty. And near ready to join the jettisoned debris is Stephen Bannon, author of many of Trump’s inbred deconstructionist policies, whom the president appears to have tossed under an oncoming 18-wheeler.

Trump described Bannon, in an off-handed interview that shouted no-confidence, who has been characterized as a shadow president and rigid ideologue with a mission, with this stiff-armed statement: “A guy who works for me…” Trump added of Bannon, credited with fashioning the policies that sealed Trump’s election: “I like Steve, but you have to remember he was not involved in my campaign until very late. I had already beaten all the senators and all the governors and I didn’t know Steve. I’m my own strategist and it wasn’t like I was going to change strategies because I was facing crooked Hillary.”

Trump also recently removed Bannon from an honorary seat on the National Security Council, which he shouldn’t have gotten to begin with. Machiavelli, the world’s first political consultant, observed, “Whosoever brings another to power to power loses power himself.” Put another way, Trump cannot tolerate attention that’s directed at anyone but himself. Or, a smart politician never allows a second power center to develop.

Spicer can barely keep pace with Trump’s many whims. On NATO: “I said it was obsolete. It’s no longer obsolete.” On economics: Trump has changed his mind about China’s currency manipulation, about reappointing Janet Yellen as chair of the Federal Reserve and retaining the Import Export Bank—long a bugaboo of conservatives. So forget about currency manipulation, Trump will use China to tame North Korea. On health care and taxes: After the humbling defeat of health care reform, Trump said tax reform is more important. But wait a minute. Now Trump says that health care reform must occur before a tax overhaul. Cryptic comments on FBI director James Comey include: “He can stay, but I can still fire him.”

Spicer and his boss often get messages crossed and corrected, as do others in the administration, leaving open the question of whether there is a central intelligence at work or if the Trump Administration is an assortment of free-lance operators. For example, Trump (and Bannon) have described the press as “the enemy.” But Spicer, during his apologia, observed that America has a “very robust media… and I think as long as we have a healthy and robust media, I’m fine.”

Another major problem that Spicer and the Trump communications machine have is just who speaks for the Trump Administration, and does it really matter, given Trump’s mercurial nature and his impulsive Tweets. On a recent occasion, in advance of Secretary of State Rex Tillerson’s meetings in Moscow, Eric Trump, the president’s number one son, while traveling abroad on family business, disavowed ties between his father and Russia and observed that America will not tolerate abuse from Russian President Vladimir Putin. “If there is anything that Syria did, it was to validate the fact that there is no Russia tie.”

This statement led to speculation that President Trump bombed Syria simply to make that point—after protesting that he’d never get involved in the Middle East—and to deflect attention from investigations into his Russia connections. Yet nothing rallies the public to a president’s cause like the rumble of war as the send-‘em-a-message bombs burst over Syria, Afghanistan and possibly North Korea. War, or the preparation for it, is a convenient distraction from political problems at home. What’s more, Trump may have discovered the secret of unifying the nation and demonstrating his toughness by keeping America at battle-readiness. And it may be among the reasons he’s surrounded himself with generals.

But wait! It was reported recently that the FBI obtained a secret court order to monitor the communications of Carter Page, a foreign policy adviser to the Trump campaign, for possible links between Russia and the campaign. It was also revealed that Paul Manafort, Trump’s former campaign manager, has registered with the Justice Department as a foreign agent for work he did for the president of Ukraine, a close associate and crony of Putin. Manafort is the second Trump associate, following former National Security Adviser Michael Flynn, to acknowledge and register after the fact, for receiving payments from foreign governments. Flynn worked for Turkey but had dealings with Russia.

Remember that during the campaign and after his swearing-in, Trump had favorable words for Russia and high praise for Putin as a courageous leader. Now, in another pivot, Trump’s turned his back on Russia and buddied-up with China which he’d trashed during the campaign. Much of this Zelig-like behavior among leaders is posturing and positioning.

So, it’s easy to fathom how Spicer can be misled, even misguided, by the confusing swirl of signals bewildering his receptors and the messages he’s receiving from the competing factions within the White House as well as the president himself. Defending the indefensible is a difficult job.