Hillary Gets Tossed Around 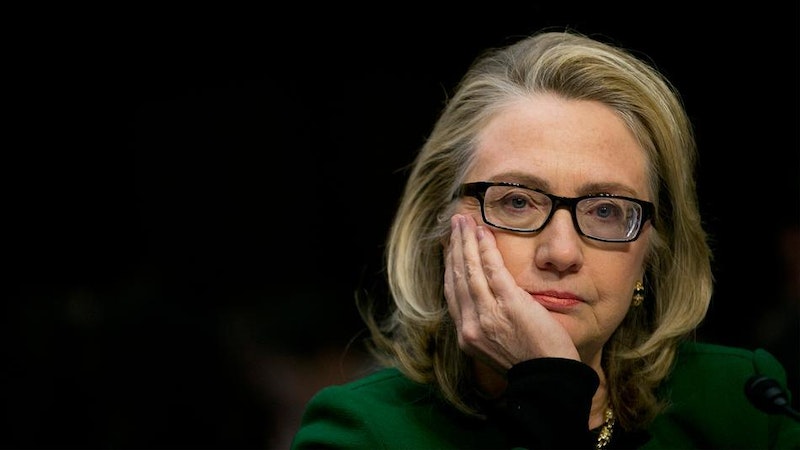 The right hates Hillary. Always has (by which I mean since 1992), always will (by which I mean always, for as long as we have a USA). But does anybody else care? By this point, probably not. She's just one of the things the country is stuck with: the Electoral College, fat thighs, Hillary. She has a record of screwing up when placed in charge: health care reform in the 90s, her Iraq vote when she was a senator, her campaign when she ran for president (because, no, you don't get all the delegates just for winning a state's primary, not if you're a Democrat). She did okay as secretary of state because Obama made the big decisions while she flew around in her plane.

Now her number's being called and she gets to be president. Or so it looks. Personally, I think she'll never make it, that fate will always block her. But people said that about Nixon.

I think Hillary evokes a big “Yeah, why not?” in the populace. We look at her and think, “Well, if this is what we've got...” Nothing else is being served, except some crazy Republicans. Who knows, maybe she'll do something worthwhile. She's been around enough. Whatever it takes to be president, she seems to have it: quick study, determined, hard. No one ever said she was stupid, nobody said she was weak. Nobody doubts she could take it all on her shoulders, and she'd know the issues down to the ground.

All this is a given for Hillary, but nobody wants her. Nobody except that band of women who think somebody female should be number one. Everyone else mutters and has misgivings. Hillary's ruthless and phony, really not very nice. Which was true of Franklin Roosevelt, Lyndon Johnson and John F. Kennedy, among many others. People like that tend to take the reins.

Women get mad about this muttering, I guess. Hillary does what potential leaders are supposed to do. She keeps her eye on the prize and she binds people to her. She can talk Richard Mellon Scaife into saying some kind words; when she and her rich-boy persecutor finally met, the kingpin had a “very favorable” impression. That kind of stunt, bending people—her husband really does it best. But she's not bad. It's like being a human tide pool. You have suction, so to speak, or instant leverage. People like that get to do history's heavy lifting. They can move things around.

But Hillary gets shit. People don't read her as someone who can make a room move, give reality a push. She's a shifter, a conniver. They guess about her iPod preferences and how they're calculated. When maybe she's just a woman who likes Bonnie Raitt and can twist crazy billionaires to her will. People like that come along; okay, here's one.

And all the while... well, her results haven't been good. Not entirely bad, but not special. She's well drilled on detail but indifferent as to outcome. Cheerleading for a disastrous war would be one example.

I guess I'd like Hillary to execute duties while some responsible party is there to supervise. Not her husband so much as that nice Elizabeth Warren. (I don't say here what is probable, just what I would prefer.) The right has been talking for 23 years about Hillary the lesbian; maybe she and the senator can exchange emails the way Eleanor Roosevelt sent letters back and forth with that lady journalist. “Two can love, and court through knowledge, what never flesh does touch,” to quote the poet Appius. The President would take the right path and make smart moves in order to impress her soul mate.

I'd feel safer knowing that the President subconsciously let her thoughts linger on the lips of a woman who understands why Wall Street is such a clusterfuck. The deal would have a 90s flavor, a whiff of the past when Hillary was new and so was a woman on top of a woman. Throw in adjustment of America's financial sector and you have the new dawn.