Why Being a Democrat Kind of Sucks 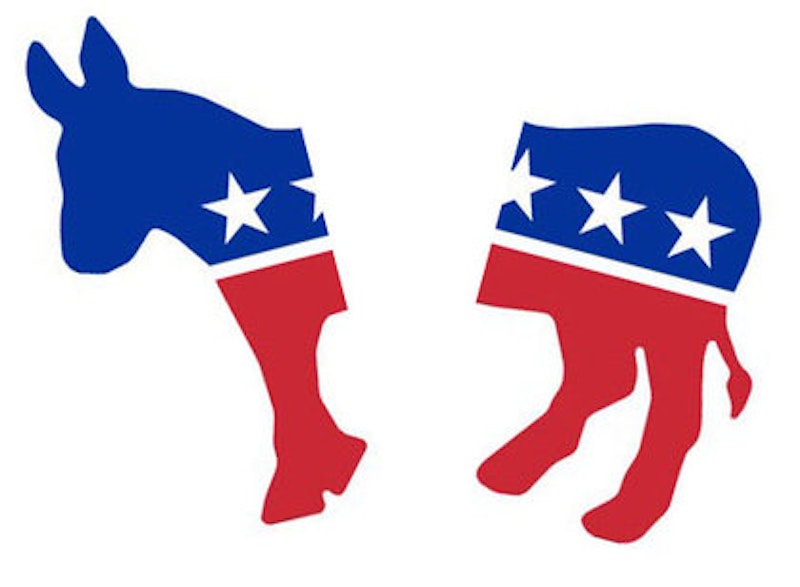 In the heart of every Democrat lurks a dark memory and a sad foreboding. And if that's not the case, it should be. The memory is this: President Clinton signed the repeal of Glass-Steagall and did so with no reluctance and no regrets. Repeal was just fine with him; he was all for it. The foreboding is this: If Barack Obama had been in his place, most likely Obama would have done the same. After all, the man wanted to make Larry Summers chairman of the Federal Reserve.

Today's Democratic Party collects most of its money in Beverly Hills, Silicon Valley and Wall Street. The first two can be tolerated, but the last is a killer. Luckily, Wall Street has misgivings about Obama. Its donors swung heavily toward the GOP because Obama supported some new rules after the crash of 2008. Obama hurt their feelings by giving speeches about millionaires and billionaires. From the elite point of view, Obama counts as such a lesser good that they'd like to send him back. From my point of view, that qualifies him as the lesser of two evils, and loyal Democrats can stagger forward to our next disappointment.

How likely is that disappointment? Bill Curry, a White House counselor during Clinton's first term, just wrote a piece outlining how deep in the bag today's Democrats have sunk. Detail is scant, but the through line is suggestive. First, Democrats lost the Senate and the White House in the disaster of 1980. An enterprising congressman named Tony Coelho hooked up the party's congressional candidates with Wall Street. The Democrats have stuck close ever since, with instructive results. Fast-forward to the 90s and more recent times:

Clinton would be the first Democratic presidential nominee since FDR and probably ever to raise more money than his Republican opponent. (Even Barry Goldwater outraised Lyndon Johnson.) In 2008 Obama took the torch passed to Clinton and became the first Democratic nominee to outraise a GOP opponent on Wall Street. His 2-to-1 spending advantage over John McCain broke a record Richard Nixon set in his drubbing of George McGovern.

Yes, Obama raised a lot of money from small donors, thanks to the Internet. But he raised a lot more from big donors, thanks to the path blazed by Tony Coelho. This places the rest of us in a predicament. Curry thinks the answer can come from Ralph Nader, who he says is doing interesting things on the non-partisan populist front. Well, good, but Nader reminds us why the predicament bites so deep. I'm talking about 2000, of course.

As Curry presents things, Nader was the only progressive willing to notice that Glass-Steagall repeal and the Telecommunications Act of 1996 were bad things, not good: “Democrats, he said, were betraying their heritage and, not incidentally, undoing his life’s work. No one wanted to hear it. When Democrats noticed him again in 2000 the only question they thought to ask was, what’s got into Ralph?” Curry proposes a thought experiment about the Democrats and their ticket: “Had they nominated a pro-lifer in 2000 and Gloria Steinem run as an independent it’s easy to imagine many who berated Nader supporting her.” Actually, it is easy to imagine that. A few people have made the point that today's Democrats stick to issues concerning genitals and skin tone because messing with the money power is just too dangerous. The Steinem-Nader swap drives the point home, and it makes party loyalists look like triflers.

But by running, Nader did nothing to advance anyone's agenda but the Republicans', and their agenda was destructive of those good things that keep a country from going belly up—most notably, whatever good thing keeps a country from blowing a few trillion dollars and gut-busting its military by presiding over the deaths of hundreds of thousands of innocent foreigners. But, much like the United States, I don't need to go into Iraq again. It left us with a lesson that Obama's left-wing critics would like to ignore. Yes, one of the parties really isn't good enough. But the other party is crazy. So I'm still a Democrat.