Pundits Forget How Much Fun Watergate Was

Would the media pursue a Nixon-like scandal today? 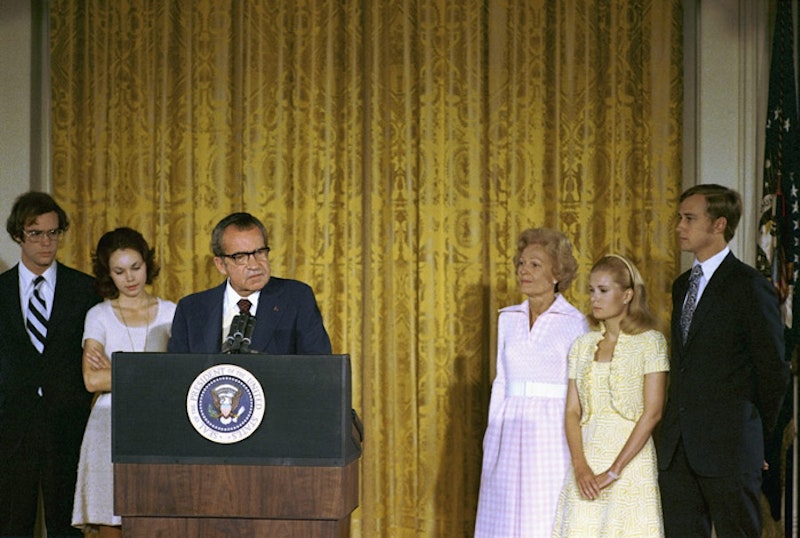 It’s the week for 40th anniversary essays/op-eds on Richard Nixon’s reluctant August 9th resignation from the presidency in 1974. Fine by me, since it was an event both weird and fascinating, the culmination of the most riveting non-stop reality show that commenced earlier the previous year. And it also makes one wonder that if a president today racked up as many crimes as Nixon—guilty! guilty!—how the scenario would play out in our fractured, zero-attention span media. Remember, The Washington Post’s Carl Bernstein was a metro scrub who was assigned to the original Watergate break-in beat in 1972—along with a young Bob Woodward—since the paper’s editors initially had little interest in it. This was when The Post was fat, profitable and teeming with editorial staff; today, someone like Bernstein, in a reduced newsroom, probably wouldn’t have a job. Taking a flier on a long-shot story that might pan out and is time-intensive just doesn’t happen; Woodward would be too busy writing five blogposts a day. Do you think Politico would devote the resources to a seemingly hum-drum, politics-as-usual crime? I don’t either.

Anyway, I’ve read several of the anniversary pieces, familiar as the Nixon saga is, and what’s missing is any recollection of how much fun it all was, and not just for a 19-year-old college student like myself. The New York Observer, for example, ran a piece by noted liberal author Rick Perlstein—whose books on Barry Goldwater and Nixon I liked enormously—that had this odd headline: “Nixon’s Sad, Strange Exit, 40 Years Ago.” Well, yes, it was strange—Nixon declaring he wasn’t a crook, the Saturday Night Massacre, the Ellsberg break-in, the tapes, presidential aides walking the plank one by one, and so on—but it certainly wasn’t sad, unless you were Nixon or one of his few remaining supporters. It was party time!

Perlstein’s an historian—five years old in ‘74—and I admire the extensive research he puts into his books, but one item in his Observer article strikes me as overblown. He writes about House Judiciary Committee chairman Peter Rodino—after his committee voted for the first article of impeachment on July 27—clearing the room. He did so “[B]ecause of the rumors that an airplane under the command of Richard Nixon was set to crash into the Capitol. It was an eerie foreshadowing of September 11, 2001, and people believed it was possible because regarding their president, it was believed that just about anything was possible.” I’ll take Perlstein’s word for it, but one has to remember that even if this rumor was circulating, it was one of about 100 that people were talking about. And although Nixon was a basket case at the time, drinking heavily and praying with Henry Kissinger, I doubt mass murder was in his plans, and even if it were, none of his minions would’ve carried it out.

In the summer of ’74, I had a grunt job in a biology lab at Princeton University, cleaning out rat trays, disposing of them (with chloroform) when the grad students were finished testing, mopping floors and feeding monkeys. It took three hours of my workday to complete these tasks, so I had plenty of time to read, poring over The Post, New York Times, pre-Murdoch New York Post, The Wall Street Journal and Newsweek and Time. I was very well-versed in almost every aspect of the Nixon scandal and didn’t get a whiff of the kind of conspiracies Perlstein writes about. Obviously, such a rumor wouldn’t make it into print, but still… a little far-fetched.

When Nixon did resign, the streets of quaint Princeton were filled with joyous students and faculty members, and I had a ball, drinking vindication beers with the throngs, and I can’t remember a single person who was upset by the rapidly unfolding events. If you hated Nixon—and, at least in the Northeast, who didn’t?—it was the equivalent of Mardi Gras. A month later, back to sophomore year at college in Baltimore, it was stunning when Jerry Ford announced that he was giving Nixon a full pardon, really pissing people off, but even that devil’s bargain, which tipped the ’76 election to Jimmy Carter—was almost a footnote. Nixon was gone, and the country celebrated.