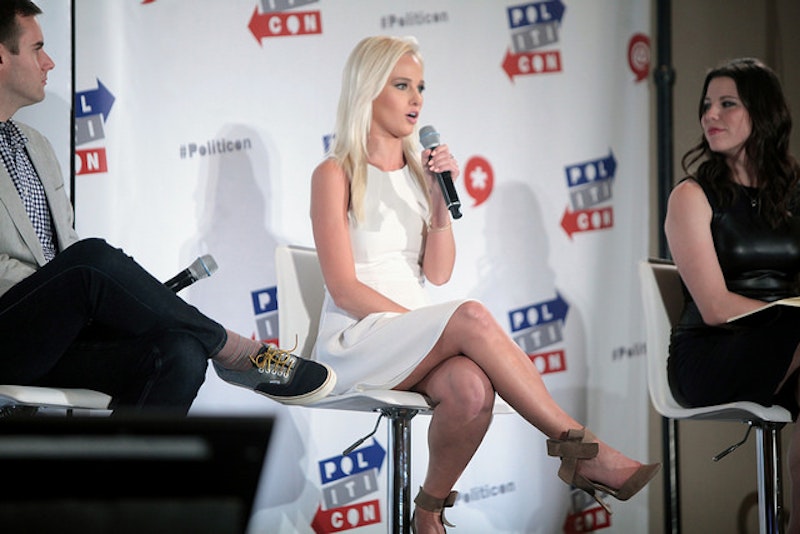 William Kristol recently published a short editorial in The Weekly Standard, the magazine he co-founded in 1995. It’s a piece that would’ve been spiked by the competent editor of a college newspaper.

Reading it, the only question that remains is if Kristol is now the world’s worst conservative pundit, or if the crown goes to motormouth ballbuster Tomi Lahren.

Kristol’s “The GOP Through the Looking Glass” is like an amateur abstract painting. It hints at an idea, suggests that there might be a point, but does no more. ”Back when Donald Trump was merely a small dark cloud on the horizon of American politics,” Kristol writes, “many of us were already worried about the state of American conservatism. Five years ago, I suggested in these pages that Eric Hoffer’s famous observation of decades ago applied to the conservative movement. To paraphrase, every great cause begins as a movement, becomes a business, and eventually degenerates into a racket. But that problem can be addressed by rejuvenation, reformation, and renewal. And it seemed it was being addressed during President Obama’s second term, and that it might come to fruition in a reformist Republican presidential candidate in 2016.”

However, “one year into the Trump presidency, we face a crisis of conservatism more serious than a normal cyclical downturn from which movements can and do recover. To update Hoffer’s formulation: Every great cause begins with ideas, hardens into an ideology, and eventually degenerates into conspiracy theories.”

Kristol never explains what those conspiracy theories are or who holds them. He claims that the “willingness to believe in ‘secret societies’ and conspiracies—not mistakes or biases or incompetence—at the FBI is reminiscent of Sen. Joseph McCarthy.” Furthermore, “today’s rhetoric about the ‘deep state’ would warm the heart of Robert Welch and his John Birch Society.”

Whose rhetoric? Kristol doesn’t say. What is the exact nature of the conspiracy theory? You’ll have to guess. Kristol is a nepo-con, or nepotism conservative. Nepo-cons are men like Kristol and John Podhoretz who have well-known conservative parents and have used that genetic tailwind as ballast to a career of soft coasting. Never having to work real jobs—even the sometimes grueling job of beat reporter—they lay back on foundation money and occasionally belch up opinions. Better yet, they get someone to pay for them to go to movies.

Kristol’s editorial is the product of a cultural barnacle—the Andrew Ridgley of political commentators. Kristol’s father Irving Kristol, known as “the godfather of neoconservatism,” was a New York intellectual and the author of several penetrating books, including Two Cheers for Capitalism and Neoconservatism: the Autobiography of an Idea. In 1965, Kristol Sr. founded the journal The Public Interest, the locus of some of the best and most thoroughly-researched articles in journalism. In 1974 Thomas Sowell wrote a groundbreaking article about black student achievement at Dunbar high school in Washington, D.C. Sowell didn’t lazily adumbrate that black kids needed good role models, but cited numerous scientific and social studies about the issue, as well as quoting graduates from the school. He did his homework.

Driven mad by Never-Trumpism, Bill Kristol is sliding into the lazy, emotive liberalism that his father warned against. Is Bill Kristol even worse than Tomi Lahren, the young blonde spitfire on Fox who provides culture war rub ’n’ tugs to the Ted Nugent demographic? Probably. Whereas Kristol can’t be bothered to use examples to defend his brain farts, Lahren will occasionally cite a source, even as she finds the liberal chimera in everything from acne to nuclear war. Lahren’s latest tomahawk blames the current fad of kids eating Tide detergent pods on liberal parents. Kids are swallowing the detergent, Lahren claims, because of “loosey-goosey” parenting: “This isn’t a social media problem, a Tide problem, or even a medical problem. It’s a parenting problem, like many things wrong with modern society.” The parenting problem “produces wild animals that think they can do whatever the heck they want and get away with it.”

Lahren has this exactly backwards. Kids today are indoors for so many hours playing with their digital gadgets that their animal instincts never find expression. The Tide dare is not a political thing but a cultural one.