And the political nominees are… 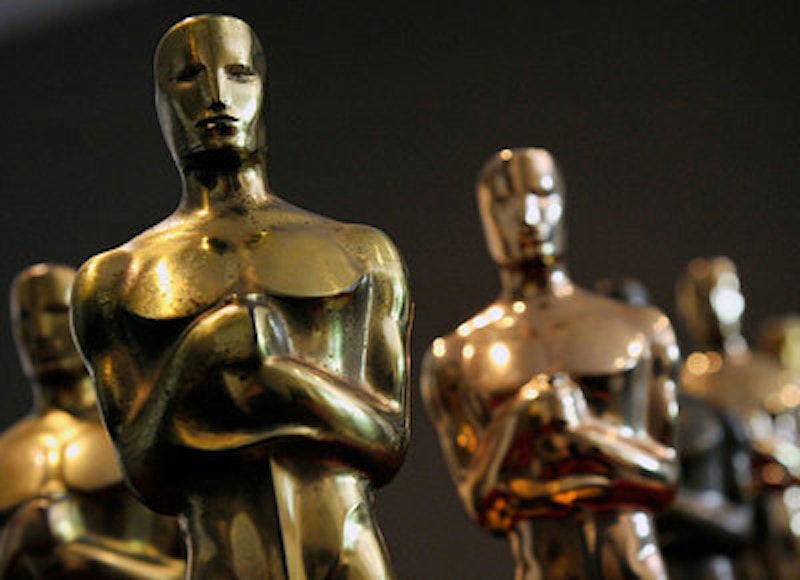 It seems like only yesterday when people who griped about Hollywood movies being preachy just meant the movies were left-wing or, on far rarer occasions, right-wing. These are strange times, though, and with the list of 2018 Oscar nominations announced last week, I can’t resist sifting our confusing current cultural output for more postmodern political messages.

I never would’ve pegged the mer-man love story The Shape of Water as a movie torn from today’s headlines, but within days of its nomination, the news broke that conspiracy theorist Alex Jones and “pick-up artistry” author Neil Strauss are co-writing a book arguing that aliens are among us but that those aliens have (probably) been created by run-amok biotech rather than extraterrestrial ecosystems. Jones has claimed in the past he’s witnessed gilled, amphibious yet humanoid babies struggling to stay afloat in laboratory tanks, which seems… unlikely. I’m pretty sure saying that doesn’t make me a globalist per se.

If some especially sophisticated readers conclude the Jones/Strauss book is just an elaborate metaphor for the way a “guardian” class of high-tech rulers has separated itself from the ignorant masses, I suggest we start referring to those readers as “Neil Straussians.” After decades of Leo Straussian influence on the right, this move would be good for another 15 years or so of complete ideological confusion. That may yet give the rest of us a chance to escape from the lab. (And hey, maybe in a few years we’ll see the Neil Straussians as no weirder than transhumanists or their more libertarian kin, Extropians. Remember Extropians? Maybe I don’t hear about them as much these days because they finally ascended to the next level of evolution.)

It should be interesting and more than a little grotesque to watch as Hollywood, always eager to square circles, tries to keep sending moralizing messages even as the public hears about wave after wave of Hollywood sex scandals. You know it won’t stop stars from trying to guilt-trip the rest of us for not using enough solar panels or whatever. California, after all, is a state that can barely control violent crime yet wants to impose $1000 fines on waiters who offer customers plastic straws. That state’s strange priorities remind me of the half-anarchist, half-communist impression I got from MTV back in the 1990s, which was roughly: disobey your parents but always recycle aluminum.

L.A. still has some ethical boundaries, though. Not only were people duly shocked to hear about a phys ed. teacher there stripping naked and chasing his students around the playground this month but a masked customer nicknamed the Bunnyman was exiled from an elite sex club (one Gwyneth Paltrow has visited) for sending mean messages to another regular customer’s 12-year-old via Instagram. There have to be some standards.

It’s an increasingly diverse world, which is one reason the length and variety of the Oscar nominees list keeps growing. As a result, I confess I’ve only seen two of the Best Picture nominees, Dunkirk and Three Billboards, so I guess I’ll have to root for one of those. Also, I have an ex-girlfriend who was oddly insulted that I said she looks like Frances McDormand, so I figure the more acclaim the stupendous McDormand gets, the less insulting I appear in retrospect. (I assume the actual Academy members are about as rational in their voting.)

I was hoping that I’d have a stronger personal stake in the Oscar competition, since a libertarian I know, Omar Wasow, appears in the documentary Unrest about his wife’s chronic fatigue syndrome. It made the short list, though not the ultimate list of actual nominees. If she gets tired of the whole filmmaking process or the awards, I wonder if she can tell.

As I’ve written before, I think it would be fascinating if Hollywood dared pick nominee Call Me By Your Name for Best Picture (and Hollywood’s so gay and gay-friendly, it just might), since you’d think they’d be averse to reminding people that the town loves gay underage sex. Similarly, Fasih Ahmed—editor of Newsweek Pakistan and contributor to both The Wall Street Journal and Newsweek, as well as recipient of a New York Press Club Award—has tweeted that he thinks child rape is pretty normal and perhaps even an inspiring honor if the perpetrator is, say, Tom Cruise. That gives you some idea how little examination of people's psyches and morals goes into doling out press awards, just in case you thought that was a saner process than the Oscars.

But it’s no surprise humans remain primitive and pagan at heart. It crosses my mind that four out of six (yes, six) Marvel movies this year explicitly feature an animal motif in the title, as if we’re still trying to harness animal spirits. Organizers of the annual nerd gathering DragonCon apparently had a brief debate over whether to be offended that Black Panther wasn’t shot “on location” in the jungles of Africa, though the high-tech Afrocentrist utopia of Wakanda is a fictional country (perhaps future X-Men films will feature location shoots in Genosha, or now that those movies are all Disney, do a Lion King crossover).

There’d be even greater controversy, I think, if some Black Panther screenings next month occurred in the same theater as Iron Sky: The Coming Race, the sci-fi Nazi comedy tentatively scheduled to be released the same week (maybe #MakeMineMarvel would suddenly become an anti-racist solidarity slogan). A friend of mine who’s in the Uhuru black socialist movement hasn’t decided quite how she feels about Black Panther yet. I wonder if the racist girlfriend of the UKIP leader will see it.

Of course, to me as to most fans, the important thing about Black Panther isn’t race, geography, or politics. We’re obsessing over whether Black Panther will be revealed as the wielder of the final Infinity Stone prior to May’s Infinity War movie.

My guess is that the Stone is indeed inside the Heart-Shaped Herb of Wakanda, in keeping with the pattern in the Marvel movies whereby the Stones’ locations slowly spell out the villain THANOS’s name like an acronym—now lacking only an H, despite the immense tease of the recent Thor: Ragnarok containing Heimdall, Hela, and the Hammer of Thor (and being a very funny, Hitchhiker’s Guide-like film in part because fans in Hall H at ComicCon laughed very hard at an early cut of the film featuring jokes that the producers had been planning to cut; feedback matters).

But to get back to this year’s Oscar nominations: two Marvel films are nominated, Logan and Guardians of the Galaxy Vol. 2, for Best Adapted Screenplay and Best Visual Effects, respectively. I wish them luck, and though they may not seem highbrow, they probably do more to teach kids to tolerate strange people and respect the freedom to travel than any pontificating acceptance speech ever will.

The real political and moral oversight this season, though, unless it gets a special segment at the Academy Awards, is that so little hoopla was made over the 200th anniversary of something that would go on to influence many films and books alike: It was in January 1818 that a 20-year-old Mary Shelley published her novel Frankenstein. Her extraordinarily influential close friends and family members basically gave us anarchism, feminism, and Romanticism, but she gave us one of the most important tropes in sci-fi, and the weirder the world gets, the more her contribution may come to be seen as the one with lasting relevance.