Tennys Sandgren Is Accused of Being Alt-Right 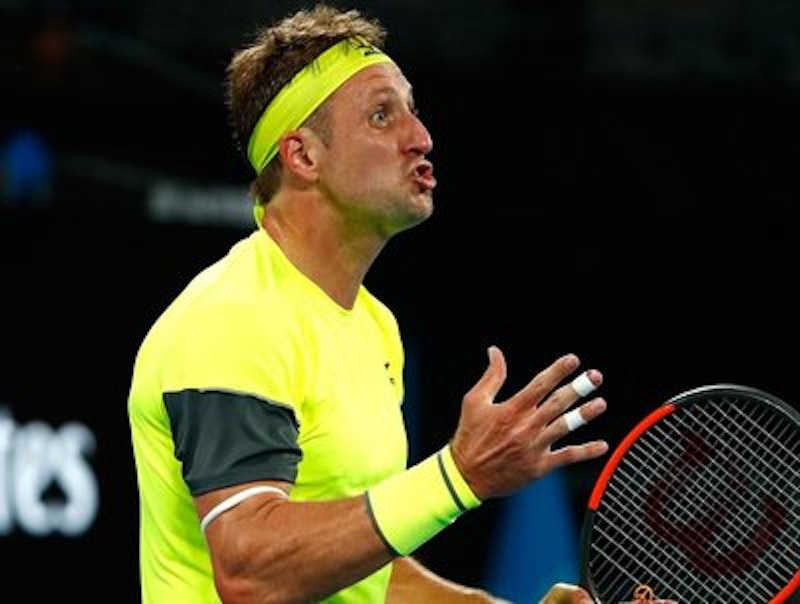 High-profile athletes who enjoy the tweets of right-wingers like Paul Joseph Watson and Alex Jones need to keep that a secret. Just ask Tennys Sandgren, the 26-year-old professional tennis player now at the center of the sport’s first alt-right-related political imbroglio after some of his politically incorrect tweets came to light. Sandgren’s a country boy Trumpster from Texas and former standout at University of Tennessee who just had his first breakthrough at a major tournament at the Australian Open, making it through to the quarterfinals before succumbing to the 21-year-old South Korean sensation Hyeon Chung. Normally it’d be a blockbuster story when a rising American player, who’s been in the obscurity of the Challenger circuit for several years after graduating college, makes a run like this out of the blue, but the Texan hasn't been careful on Twitter and now his party’s been rained on.

Retweeting an alt-right figure or two and making insensitive comments about LGBT people, as Sandgren did, could’ve landed him in plenty of hot water, but he went so far as to diss the undisputed Queen Bee of Tennis, Serena Williams, when the savvy people know that to question her utter perfection in any way is verboten. It's doubtful there's ever been a sports superstar so off-limits to criticism in the history of sports. The entire media acts as her Praetorian Guard.

Here's Patrick McEnroe on that topic: “Forget about the politics and all that but taking shots at Serena, for example, I mean that’s just not cool at all.” Notice John’s younger and more politic brother didn't say anything about what provoked the shot. Chris Fowler, McEnroe's ESPN co-host, was actually defending Sandgren, but of Williams he said, “…you don’t take shots at Serena on Twitter.” Fowler knows the rules.

Sandgren does appear to have some alt-right and homophobic leanings, though it's impossible capture his essence from his now deleted Twitter feed. He’s since said that he's just had some curiosity about the alt-right and that to espouse their beliefs would run counter to his Christian beliefs. He once tweeted, “Stumbled into a gay club last night ... my eyes are still bleeding. #nooneshouldseethat.” He also retweeted Alex Jones suggesting that transgender bathrooms will attract perverts, and another one affirming his belief in “spirit cooking.” Another tweet mentioned “trannys,” and he retweeted an alt-right figure, Nicholas Fuentes, who attended last summer’s white power rally in Charlottesville. And of course he believed in Pizzagate at the time. Sandgren's a fairly standard-issue young Trump supporter who you'd expect to see in one of those ugly MAGA hats.

What's much more interesting than Sandgren's tweets is the media reaction. A good example of how sports media handle eruptions involving Trump supporters and Serena Williams is Laura Wagner’s coverage in Deadspin. Sounding befuddled she wrote, “Why don’t you talk about... what he thinks about black people and Muslims?” while including a link to a Mike Cernovich tweet that Sandgren had retweeted. The tweet was actually critical of the media and in no way demeaning to either Muslims or blacks.

Wagner also pointed out that Williams had asked Sandgren to apologize for “the hateful and discriminatory things he’s said,” which are her words, not the tennis star’s. The writer did not state what those hateful words were. Williams, in her tweet, didn't even specify why she was calling for an apology, leaving it for people to figure out themselves. Like Patrick McEnroe, Wagner left the impression that Sandgren was calling Williams a disgusting person. In fact, Sandgren was reacting to a video in which Williams appears to yell, “Yes, bitch!” at her opponent after winning a point.

The media never covered that, because they don't or can't, but if Roger Federer ever called his opponent a bitch during a match they'd be all over it. Perhaps they're used to Williams behaving like that. She was disqualified from the 2009 U.S. Open for telling a lineswoman, “I will kill you, and “I swear to God I'll fucking take the ball and shove it down your fucking throat." After the match, she said, "An apology from me? How many people yell at linespeople? I am a professional. I'm not the beggar.” Williams once demanded an apology from a reporter who'd asked her a question, politely, about her play in a match that offended her Royal Highness. He meekly offered a craven, “I'm sorry,” in what has to be one of the most cringeworthy moments in the history of sports journalism.

Kevin Spiver, for CBS sports wrote: “One has to think it takes a lot to turn Serena Williams against you, too.” A former U.S. Open lineswoman might have something to say about that. Forget about getting the real story on this one from Spiver and his media colleagues. It's doubtful that Sandgren will now be able to build on the success he suddenly found in Melbourne. That's the way it normally works, but the media won't let this go. He'll pay a price for learning two valuable lessons: Never, ever criticize Williams if you're in the tennis world, and keep your right-wing politics private.