Trump’s Presidency Is a Novelty Act

The President’s fatal flaw is that he listens to himself. 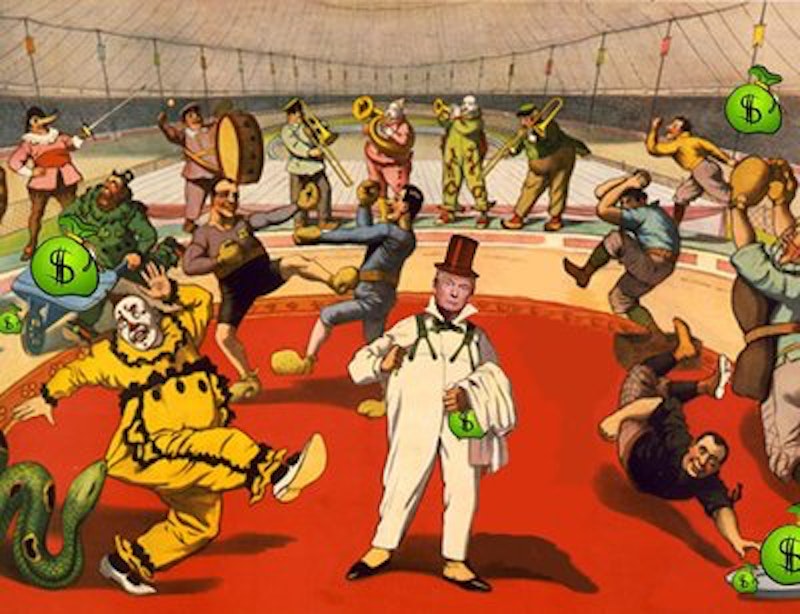 Most presidents look forward to rewarding afterlives of writing best-selling memoirs and doing good works through foundations and other organizations. Few return to their former lives of lesser jobs or offices, most of them governors or legislators. President Trump, after four (or fewer) or eight years in office may be the exception who’ll return to a business he never really gave up except in appearance only.

In that sense, Trump, as president, may be destroying the most sacred currency any politician or businessman has going for him—his word and his handshake. After all, who, except a few cronies and like-minded moneygrubbers, would want to do business with a liar, cheat, double-dealing back-stabber, candidate who says he’ll release his income taxes then as a president refuses and, most startling of all, a businessman who touted himself as a deal-maker and became a president who can’t make a deal at all. Trump’s presidency has become a novelty act.

In politics as in life, a man’s word is his bond. Both are worlds where business is conducted in winks and nods. The late John Paterakis, Baltimore’s muffin man, built a $10 million bakery plant in Texas on a handshake with McDonald’s founder, Ray Crock. Warren Buffett and Bill Gates, two of America’s wealthiest men, are bridge partners as well as businessmen. Buffett gave Gates’ foundation $38 billion to support its good works with the simple statement, “I know how to make it, he knows how to spend it.”

Trump would have difficulty passing, or even taking, a lie detector test. The Washington Post’s fact checker totaled up 2140 false or misleading statements that Trump made during the first 365 days of his presidency. His tweets are contradictory from one to the next, and his staff members are often flummoxed by their reproaching character, sending them crouching into defense mode. Trump’s even ordered staff members to lie to gratify his need for adulation. And Trumps’ first-year average in the polls of 38.4 percent is the worst of any president in history.

Two new books about the chaotic Trump White House are damaging even if they’re only half true. One is under attack for shoddy reportage, the other for the common claim of misbegotten quotes. Michael Wolff’s Fire and Fury: Inside the Trump White House claims to be a wall-fly’s account of daily tumult in the Trump funhouse, but of dubious authority. And Howard Kurtz’s Media Madness: Donald Trump, the Press and the War over the Truth offers a claim that the maligned media is falling into Trump’s Venus Fly Trap. Kurtz is a Fox News host and commentator but with solid print-press credentials. His book is published by Regnery, a hothouse of right-wing tomes.

Trump was blessed with an inheritance and a gift for self-promotion. In truth, he is the “Chance the gardener,” or “Chauncey Gardner,” as he became known through a misunderstanding of his name in the film, Being There. Trump, like Gardner, learned everything he knows from watching television. That knowledge, limited though it was, elevated Chance—again, through a misunderstanding—to a position as key adviser to the president, a position Trump now holds. Trump’s fatal flaw is that he listens to himself. Smart he may be—just ask him—and maybe smarter than each of those around him, but he’s not smarter than all of them together.

But, according to Trump’s exalted avatar of himself, when the nation’s most distinguished historians next come together to rank America’s greatest presidents, they can immediately bypass Washington, Jefferson, Adams, Lincoln, and the two Roosevelts and go directly to—“stable genius.” No pause, no hesitation, no second-guessing. Trump has already ranked himself—to those in the one-third of the population that constitute his base.

But for the sharks and the pin-stripers he may solicit to do business with after he’s finished wrecking the country, Trump may find that he’s trashed that relationship, too. Yes, they lobbied for and took his tax cut in the name of free markets and friendship. And yes, they’re cut from pretty much the same sleazy thread-count as Trump, the belief that screwing each other clears the path to success. And yes, they swim in the same shark tank where Trump splashes that often lands them in court for one transgression or another. And maybe that’s why they’ll be suspicious of doing business with Trump when he’s back living in his 5th Ave. tower after the White House debacle.

As if proof were needed, Trump’s hotels are losing business because of his actions as president and his name-branding of properties has become a liability. Hotels and condos abroad with Trump management contracts are fighting to have the Trump logo removed from their properties. In New York, Trump’s home turf, professional and college sports teams are refusing to stay at hotels that carry Trump’s brand for fear of criticism and politicization. On one the Trump name came down. And his celebrated golf courses abroad, especially in Scotland, are losing business and money.

And it’s tough to tell if the Trump International Hotel, just up the street from Trump’s temporary White House digs, is turning a profit after its initial splash as a hangout for trenchermen and supplicants. (Maryland has joined in a court case arguing that Trump’s ownership of Trump International Hotel—the re-made Old Post Office Building—is a violation of the “emoluments clause” and is hurting Maryland businesses by enticing foreign governments and lobbyists to patronize it to seek favor from the White House.)

Deutsche Bank is another example of a strained relationship. The bank has loaned hundreds of millions of dollars to Trump to bankroll business ventures. Because of the transactions, Deutsche Bank has caught the eye of investigators probing Trump’s connections to Russia who are riffling through the bank’s books in search of illicit transactions. And Trump’s son in-law, Jared Kushner, a senior White House adviser, and his family are having difficulty securing refinancing for a $1.6 billion building they own on 5th Ave., much of the problem because of Kushner’s connections to Trump. (The Kushner family is also the subject of a court suit involving its Maryland apartment properties.)

The bullet points continue: Trump paid a $28 million fine to settle charges of fraudulent practices by Trump University, a real estate course that, like a Nigerian prince, peddled little but hope. Trump’s deceptive use of his charity has been noted frequently—donations that were claimed but didn’t exist, and using other people’s money to purport his own generosity.

And the latest, as reported by The Wall Street Journal, is the alleged payment of $130,000 in hush money to porn-star Stormy Daniels through a secret Delaware corporation by lawyer Michael Cohen to cover up an affair Trump allegedly had while married to Melania and six months after the birth of their son Barron. Add that alleged incident to the sexual misconduct charges against Trump by 12 women and his bragging about groping women because, as a celebrity, he could. There’s been no outrage from the family values crowd or the Christian conservatives, evangelicals and Bible-quoters who can’t decide which is the higher calling, religion or politics, so they conflate the two into a capitalist theocracy.

Trump’s mouth is his biggest liability. His latest attempt at a bravura performance was his public statement of willingness to testify under oath before Special Counsel Robert S. Mueller’s investigation into the Russia connection. Trump’s lawyers went berserk. Nobody outside the counsel’s group knows what they know or what they’ll ask. But as every political rubbernecker knows, the investigation appears to be heading not to Moscow but toward obstruction of justice.

And now The New York Times reported that Trump ordered the White House counsel to have Mueller fired, but Donald McGahn threatened to quit rather than follow Trump’s directive. Trump hasn’t learned that it’s best not to antagonize those who are doing the investigating. It’s beginning to exude the stench of a coverup.

Perjury is the only crime that can be committed under oath. And, compared to other memories that have appeared before Mueller’s investigators, Trump seems able to invoke amnesia as needed. Trump, in the end, may escape legal culpability, but the investigation’s final report could be the most damning document of his administration as was Kenneth Starr’s report on Bill Clinton. Trump will be left only with his convenient memories and memoirs. Presidents are usually judged by their last bad act.

It has been said of Trump that as a developer he negotiated with corrupt union officials and mobsters to get what he needed in New York. Sorry to say, but that’s the price of doing business in the nation’s busiest city. Any fan of The Sopranos understands that no truck, tractor or transit moves, no trench is dug or steel erected, without paying tribute to the mob and the unions. They may be the only ones left who’re willing to do business with Trump after his White House years.