Brace Yourself for the Hillary Administration

Her main priority will be fundraising. 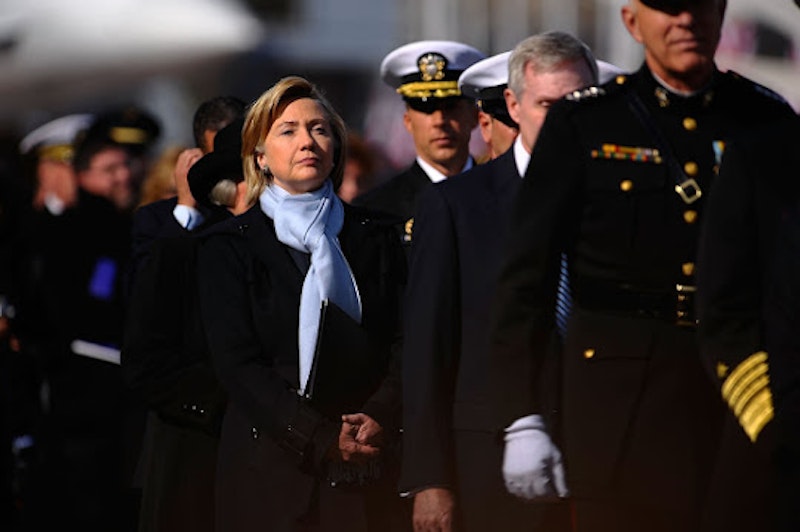 Secretly, you've enjoyed getting outraged by Trump. There may be a few little provocations to come, but after last night’s debate we've topped the rise and are coasting into the Hillary regime. Enjoyable as outrageous is—for a while, from the right source—I've had more than enough of it from Trump. Perhaps we all have.

As it suddenly comes into view, it’s safe to say that the second Clinton era is going to really suck politically. Here in rural Pennsylvania, “Hillary for Prison” signs pop up everywhere. We’re electing a person whom about a third of the population think is a criminal, a corrupt national-security risk who's on performance-enhancing drugs. And rather than try to win the election—which I think he could have—Trump has decided that the best approach is to undermine the legitimacy of the election before it takes place. By next year, he may have a television network dedicated to destroying Clinton.

These developments will make birtherism look mild, and make you realize that Obama's race was not the only reason his legitimacy was attacked. I live in serious Trump country. People believe that this is the last moment our country can be recovered. After this election, they won’t acknowledge the U.S. government as their own government.

America’s been driven by relentless, obsessive, and pointless partisanship since the first Clinton administration. We hate and despise one another, and are incomprehensible to one another: a nation of the deplorable, or certainly of the deplored. Trump actually brought some hope to the conceptual mess: his positions cut across the left/right spectrum and are, unlike the left or right, roughly coherent. Wrong, though.

But knowing the Clintons, a new wave of extremely conventional partisanship is coming along with the legitimacy crisis. It's all she knows. The Hillary administration will pivot on November 9 to re-election; the main priority of the entire term will be fund-raising. No problem will be effectively addressed, as Hillary's only problem-solving technique is to blame others.

One form this will take, particularly if Republicans retain control of the House, is relentless investigation and scandal-mongering. And what an unbelievably rich terrain of scandal Hillary occupies: a term defined by hearings, special prosecutors, resignations and so on. I predict the most scandal-ridden administration in American history, descending into some sort of impeachment drama.

And as it all swirls, I also predict increasing political violence, running both ways round. As a substitute for thinking through their own positions, left and right have vilified and dehumanized each other. They've done it so thoroughly for so long that I don't think there's a road back. Neither recognizes the other as American or as sincere. Both sides want a partition, and we are segregating by politics. The political strategy is dominated by demographic manipulation, and the parties represent races and genders and regions. We will grow ever more divided with time, as both sides take that to be in their interest.

Another problem with the Clinton administration is that we'll have to watch Hillary mechanically emit manipulative phraseology for however long she lasts. It's the least of our problems; from both sides, we'll be watching the latest stage in the interminable collapse of the American political system.