Trump does dirt on U.S. democracy, stays mum about a Clinton scandal. 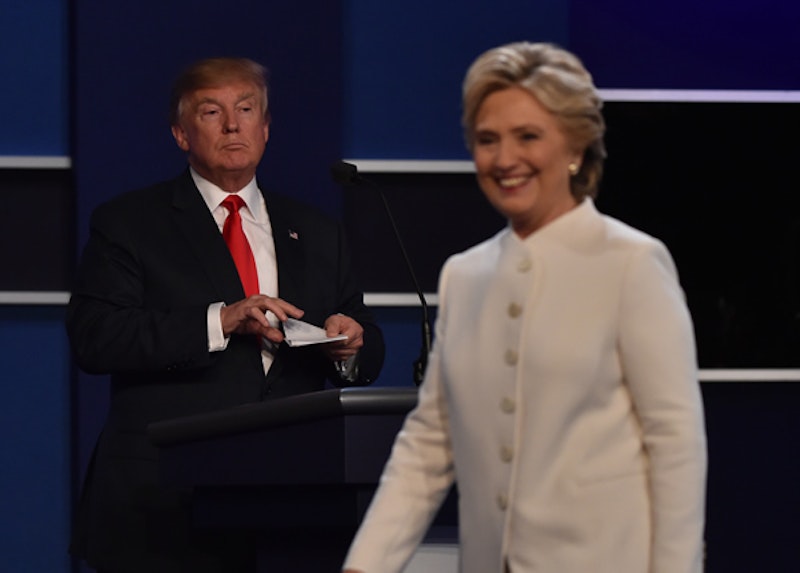 Chris Wallace said, “But, sir, there’s—” and “But—” and “But, sir, there is a tradition in this country—” Each time Donald Trump rode over him, pursuing the theme of America’s electoral shoddiness. Wallace had asked a simple enough question. To paraphrase: if Trump lost, would he admit he’d lost or would he say the election didn’t count? “I will look at it at the time,” Trump said cagily. “I’m not looking at anything now. I’ll look at it at the time.” There followed Trump’s monologue and Wallace’s attempted interruptions. Breaking in at last, Wallace cited the “peaceful transition of power” and how “the country comes together in part for the good of the country.” He wound up, “Are you saying you're not prepared now to commit to that principle?” Trump: “What I’m saying is that I will tell you at the time. I’ll keep you in suspense, okay?” Well. All right then.

The Republican candidate kind of figures America isn’t a democracy, and he used the third presidential debate to let us know. During the debate, the Democratic candidate called him a puppet of Vladimir Putin, in so many words. She also said Trump was the most dangerous man ever to run for president. Trump said his opponent was such a crook that she shouldn’t be allowed to hold office or vote. But the night could’ve been much worse. The woman in Arkansas might’ve come up.

Her name’s Leslie Millwee and she just alleged, or revealed, that Hillary Clinton’s husband had mauled her back when he was governor. Breitbart had the story, and Breitbart’s overlord is CEO of Trump’s campaign. At the second debate Trump made headlines by inviting a gang of women who said Bill Clinton had abused them. Afterward his campaign huffed and puffed about rubbing Millennial noses in the Clinton sex scandals. “We’re going to go buck wild,” an aide said, though anonymously. But the third debate arrived and Trump didn’t go buck wild.

Wallace did ask about sexual assault, and he mentioned the claims against Clinton as well as the ones against Trump. Never mind, Trump wanted to talk about emails. For her part, Hillary had nothing to say about her husband—an understandable choice. She concentrated on Trump’s recent behavior, the observations he’s been belting out about women’s looks and specifically the looks of the women who accused him. Hillary left untouched Trump’s claim (completely untrue) that his accusers had been debunked, and she mentioned only in passing that he’d done bad things. Her topic was what he’d been saying and how these comments demonstrated his attitude toward women. Bill Clinton may or may not be an assaulter and a harasser. But he isn’t a pig. Bill Clinton doesn’t leave a trail of overheard remarks that make women fold their arms protectively across their chests and think angry thoughts. Trump does, and that difference marches out loud and clear from the daily news. People can hear about witnesses and retracted depositions, but Trump demonstrates the case against himself by opening his mouth.

The debate’s peak, its most conclusive moment, came with the Minute of the Three Voices. Trump and Hillary each decided they’d do the talking, and Chris Wallace, from off-screen, tried to get them to shut up. Hillary won this exchange (or endurance test or tourney).  “... unfit and he proves it every time he talks,” she said, winding up. Trump and Wallace had stopped talking a few seconds before; in that brief gap she claimed victory. Trump sniped back, “No, you are the one that’s unfit.” Oh, sir! Sometimes getting the last word just shows you need the last word.

The subject of the Three Voices interlude was ISIS. From a policy point of view, the relevant fact here is that Trump says the Democrats allowed ISIS to happen by hightailing it out of Iraq. But hightailing was Trump’s advice for America back at the time (Trump, 2007: “How do they get out? You know how they get out? They get out, that’s how they get out. Declare victory and leave”). Hillary left that point aside and stuck to her theme of present-day Trump saying nutty things, such as the claim he’d just made that the assault on Mosul was intended to help her in the election. “You know, he always is looking for some conspiracy,” she said, and a pained Trump protested, “Chris, we don't gain anything.” There followed the three-way collision of voices.

The important thing: Hillary’s voice did fine during the test of wills. It didn’t shake. Neither did it begin scraping out the syllables or taking difficult, galumphing steps from word to word—things that happen when a person has to fight to keep their voice from shaking. Nor did she let her voice climb up into a dull bellow; when the boys finally shut down and she finished her last sentence, she didn’t sound silly. The whole episode had been silly, of course. But her part had been no worse than anybody’s, and she had prevailed on the point they’d all been contesting: namely, who was talking and who was interrupting. Hillary was talking and they, the men, had been interrupting.

The debate left much else up in the air, including whatever shoe of a sex scandal the Trump people keep hoping will drop on the Clinton people. Even the Republican candidate’s willingness to accept vote tallies is a wait-and-see proposition. But Chris Wallace and Donald Trump don’t talk through Hillary Clinton, she talks through them. We learned that much and I’ll take it.