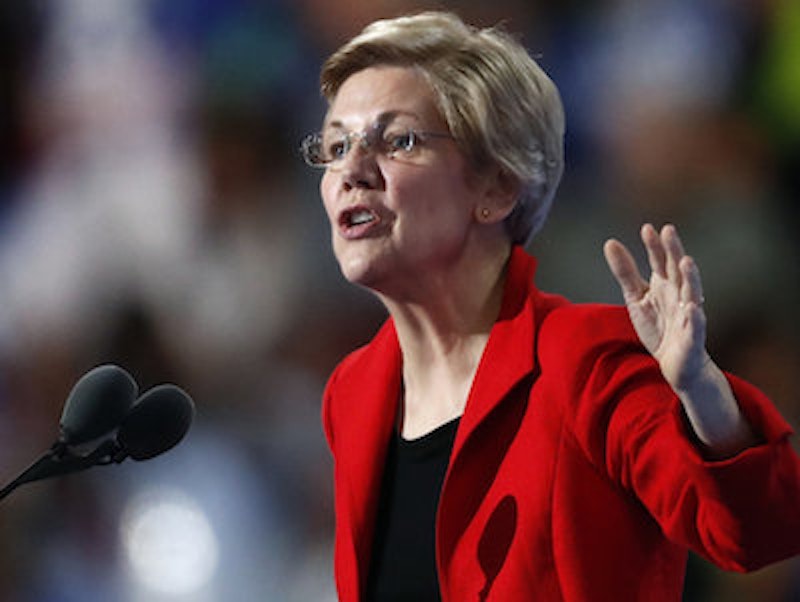 Writing for Reason, Peter Suderman skewered both the Republicans (the party of no ideas) and the Democrats (party of bad ideas) in a recent article. The writer, who views macroeconomics with an antiquated model unequipped to analyze our current economy, is concerned about Elizabeth Warren’s pet programs (way too expensive) and the fact that she didn't recognize the nascent national debt crisis in her speech at the Democratic National Convention. In fact, she didn't even mention the national debt or deficits even once, probably because she actually understands their impact.

Yes, this is the same debt crisis that's been looming for decades now. That one that’s always just on the verge of exploding and then plummeting the U.S. into Venezuelan-style hyperinflation. Suderman’s breakdown of impending doom, and the Democrat’s complicity, is a generic one. Anyone who’s read a few articles on the economy has seen all of his arguments. He does employ a new twist on a shopworn theme, however, by citing President Obama in full deficit hawk mode to bolster his case. Invoking the words of a Republican would be too obvious. If even a Democratic president thinks we're going broke, then it must be so, but Obama’s a politician, not an economist.

The Democrats have not always been so careless in their approach to debt and deficits, Suderman reminds us, like the time Obama talked about “wallowing in deficits” in his 2008 Democratic Party nomination speech. Candidates are known to play politics in such speeches, so a skeptic might posit that Obama was just trying to stick it to John McCain, whose views on continuing the Iraq war he was trying to frame as fiscally unsound. Maybe he was just plain wrong. This is the same Obama who told C-SPAN’s Steve Scully, “We’re out of money,” even though it's impossible for a nation such as the U.S., with a sovereign currency, to run out of money. Once again, this is how politicians talk, but it shouldn't be taken as serious economic talk.

One common thread in these alarmist arguments is that that they focus on just one side of the financial picture. No expert looks solely at an entity’s debts and draws conclusions from it but, inexplicably, Suderman made no mention whatsoever of the U.S.’s income and assets, although they’re obviously substantial. He’s like a banker evaluating a loan based just on your credit card debt. Indeed, to address the national debt in isolation offers about as much insight as staring at that national debt clock in Times Square that just keeps ticking upwards.

Another major deficiency in the “sky is falling” school of thought on deficits and national debt is the lack of understanding on what they actually are. Usually this misunderstanding springs from the fallacy of treating the debt of a nation with a sovereign currency that is no longer on the gold standard—the U.S.—the same as personal debt.

The U.S. government doesn't have to pay off its credit card debt though, as it creates its own money. Essentially, the national debt resides in securities accounts at the Federal Reserve Bank, in the form of Treasury securities, which are nothing more than interest-bearing dollars. That interest is very low now and for the foreseeable future, meaning servicing the debt is a bargain. Paying the interest on these Treasuries involves crediting a reserve accounts at the Fed by typing numbers on a computer screen. This sort of federal “spending” is distinct from the government purchasing scarce resources, such as labor or machinery, that would bring inflationary pressure.

We don't have inflation, even after the national debt went up by $11 trillion in response to the financial crisis beginning in 2007. The dollar’s strong too, despite what deficit hawks predicted. Suderman writes that servicing the national debt is what’s going to cause big problems once interest rates start rising again, and why not? None of the other dire predictions of the deficit hawks have yet come true. He claims all the interest paid on the debt is going to make it impossible to pay for other programs, sounding like a politician. He's working with a broken paradigm, fundamentally misunderstanding what money is now and how it works.

The wealth of the U.S., and what we can afford, is not measured in taxpayer dollars collected. Our wealth is our total capacity for production, a factor of the skilled labor available, the technology and machines in factories in existence, the physical and legal infrastructure of this nation that has made it an economic powerhouse. In reality, such factors are all that limit this nation’s capacity, not the dollars the IRS collects. Taxes aren't collected in grain any more. They're collected in dollars, which have no inherent value in our current economic system. These dollars are just used to keep score now.