Hillary Says There’s Nothing to Fear But Fear Itself 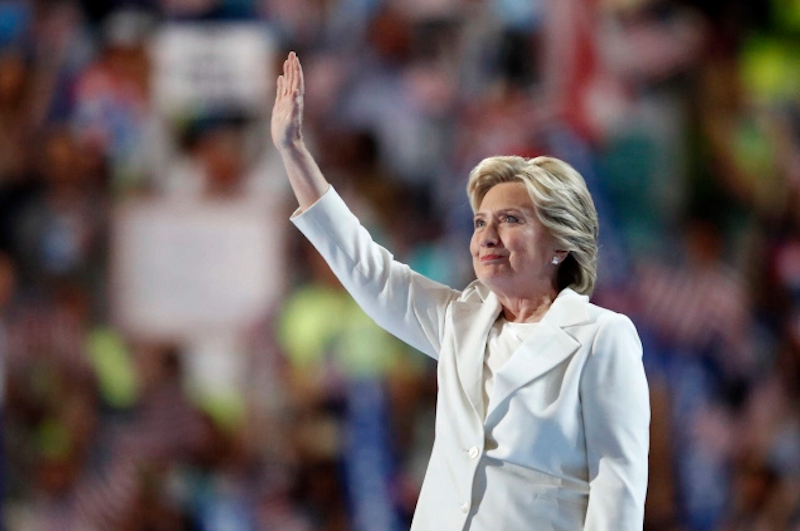 That sounded like America’s party to me. “Stronger Together”? Hey, that works. Keep the races and the orientations and the religions all on the same side, no group pushed off to become a pariah, and America stands solid. This country isn’t going to fall over. At its head, a woman in a pantsuit. She’s stumpy and a lot wider in the hips than the shoulders, like a guidance counsellor’s body double who can do (to use a consulting term) the commander-in-chief face. “We will strike their sanctuaries from the air, and support local forces taking them out on the ground,” says Hillary Clinton to the Democratic convention, her eyes hard at the thought of ISIS. Some of us think the worst knock on her is that she’s much too ready to do such things, in too many countries. But if you’re going to talk about war, you’d better sound like you can mess up some enemies. The guidance counselor pulled that off. It seemed like a natural for her.

“Bernie, Bernie,” Hillary said, much higher up in her speech. “You’ve put economic and social justice issues front and center, where they belong.” If she thinks they belong there, how did they get lost? Why did she need Bernie Sanders to fetch them back and place them where they belong? I suspect that every American liberal (as opposed to left-wing street person or Berniac) understands the answer without needing it sketched in. We have an unspoken sense that anything we’re pushing for is just the stand-in for what really ought to be done, if only America allowed that sort of thing. Obamacare is a prize example: we don’t want insurance companies, but what can you do? Bernie just lifted the ceiling a few feet so that liberal aspirations could unstoop by that much.

Meanwhile, the other party has given up on being a party and has become a whoopee cushion. “And I’m proud to stand by our allies in NATO against any threat they face, including Russia,” Hillary said, because this year somebody has to say that. With Donald Trump as nominee, the Republicans have become a party that’s really not sure if it cares about stabilizing Europe. The Democrats will just have to be the party that makes sure America stays America. So Hillary spoke of Bernie Sanders and God (Erick Erickson, who tracks God, found him in far more DNC than RNC speeches this year) and “13 unruly colonies” (she was doing a Founders interlude) and Captain Khan and “women’s rights and workers’ rights, LGBT rights and the rights of people with disabilities” and the big one, the capper.

“The only thing we have to fear is fear itself,” Hillary said. She was facing off with Donald Trump’s bigotry, and she wasn’t doing it in the traditional manner of pleading for tolerance or nagging for high-mindedness. She was speaking the words of a commander-in-chief, the 20th-century successor of the Founding Fathers, the man who led the nation to world dominance as unions and multi-ethnic singalongs became approved ways of being American. Franklin Roosevelt was talking about the Depression, Hillary was talking about Trump. But each of them was saying nobody beats America.

Bernie footnote. I suspect that one way to tell a standard-issue liberal Democrat from a Bernie booster is that the Bernie fans think Hillary is glomming onto his issues as a tactic, whereas the regulars feel that she just had to see the coast was clear and these things were doable after all. The new minimum wage and the tuition plan (“Bernie Sanders and I will work together to make college tuition-free for the middle class and debt-free for all”)—it’s not like we’re sad to see them in the platform. They’re not interlopers, they’re just details in a photo that’s fading into view. Admittedly, the Trans-Pacific Partnership is another matter. What the Bernie wing wants there may be something Hillary’s people can’t go along with.