Don’t push the button on North Korea yet. 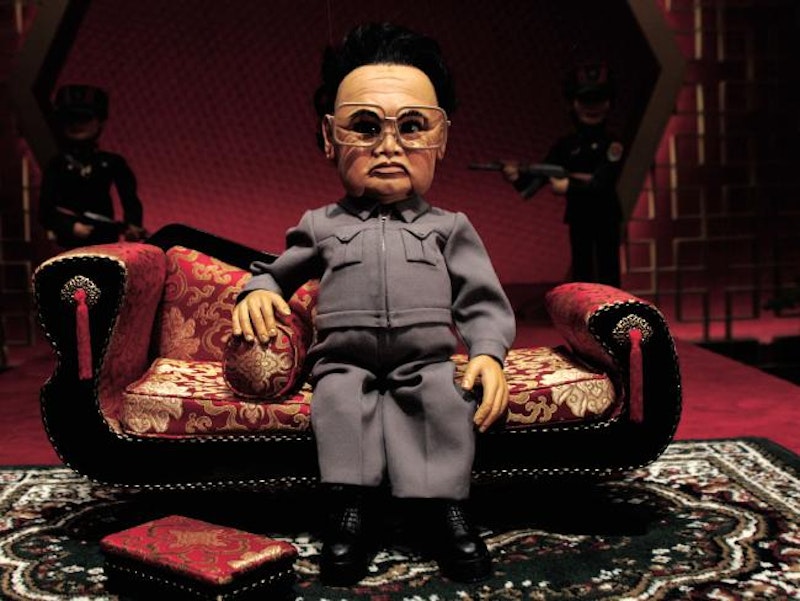 What put political correctness on pause in the aughts? Looking back at media from the early- to mid-1990s, there’s so much discussion about racism, sexism, and intersectionality that mirrors the discourse of the past four years. You could not make Borat today. MADtv could never get away with Miss Swan or Stewart now. White Chicks? Maybe. Even the implicit endorsement of eugenics in Idiocracy renders it obsolete, a dated product of the Bush 43 years, but that won’t stop lazy people from citing it as the perfect summation of our world today. It’s not. But Team America: World Police holds up and becomes more prescient every day as North Korea’s nuclear program grows and they become a legitimate threat to world peace. Still, I can’t figure the way North Korea was portrayed in that movie and all other media at the time: a joke and farce, that Kim Jong-Il marionette feeding “Hans Brix” to sharks.

Team America is culturally dated but politically current: in 2004, we were in a pointless war that was ostensibly about deposing a brutal dictator in order to free his people to the prosperity of democracy. We knew Kim Jong-Il actually was feeding people to sharks, and much worse. It took 10 years for articles like this to be written: “North Korea is a joke. And that’s the problem.” When Sony was hacked and the theatrical release of The Interview was cancelled, some realized none of this was funny anymore.

On the day they met for that infamous photo-op—still one of the most surreal moments since the election—President Obama told Donald Trump that his primary concern in the years to come was North Korea. And that’s been borne out in the last month: I was startled by the news that North Korea had successfully tested an ICBM that could hit Alaska. That was on July 4th—just last week, they conducted another test that indicated they already have a missile that could hit Chicago or even the East coast. “That North Korea Vacation? It’ll Soon Be Out of the Question for Americans.” Yeah, good.

Yesterday, in an editorial The New York Times said the President should “Drop the Bluster on North Korea.” The editorial insisted, “Mr. Trump needs to face the reality that he cannot solve this crisis by proxy, that he must intervene directly and that he should do so soon. Tensions, already high, could increase this month when American and South Korean forces hold their annual military exercises, which the North Koreans take as a sign that the allies want to overthrow their government.”

The piece ends by imploring Rex Tillerson to arrange a meeting in Pyongyang and see if they’re even willing to talk or negotiate. That’s what freaks me out—North Korea is a total wild card. Kim Jong-Un rules a country of people that fear and follow him like a God. In effect, he is God of an alternate reality on the same planet that we share. But no one knows if he’s got one foot in the door and one foot out—does Kim Jong-Un understand or accept the concept of mutually assured destruction? It only takes one nuke. As Trump said, “That’s kind of the end of the ballgame.” I don’t think Trump would preemptively nuke North Korea even if he feels backed into a corner by the Mueller investigation and a lack of legislative success at home. I could see him pushing the button if he knew he was going to jail—a “If I can’t be free, no one can” sort of thing. But he’s not going to jail. None of them are.

I get nervous whenever I see the U.S. news media going hawkish and start warmongering with stuff like this. They love those rockets’ red glare. But these are nukes—the end of the ballgame. Send someone over there! Get Tillerson to figure out if that fat maniac is bluffing or if he’s serious.