This is Why I Voted for Trump

After pulling the lever for Sanders in the primary. 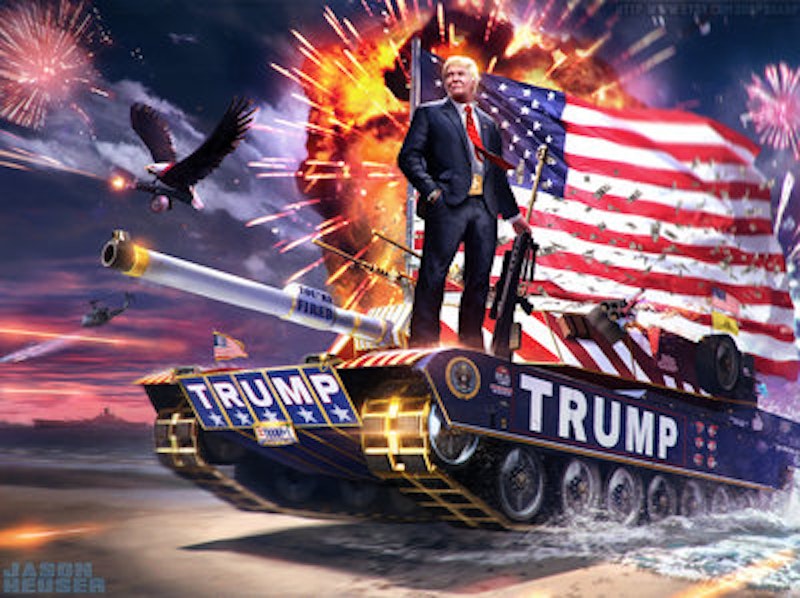 The Greek word “apocalypse” does not mean “the end of the world.” It literally translates as “through the concealed,” or “revelation.” This election process has been truly apocalyptic, and the revelations aren’t uplifting. It was bound to get ugly from the very start. It was supposed to be a walk in the park for the Oligarchs: Jeb Bush (remember him?) and Hillary Clinton, two established pawns of the financial elite, a civilized and dainty contest devoid of content, focusing on stupid gender and race-based issues having nothing whatsoever to do with the needs of real people struggling to make ends meet in a lopsided kleptocracy dedicated to eternal war. Then came Trump.

With his blunt speech and reality-show host talent for provocation, he blew the feeble semi-retarded Bush right out of the pool, and then proceeded to slash and burn his way through the dozen or so other half-witted corporate puppets standing between him and the GOP nomination. The corporate media were totally blindsided by the Trump Phenomenon: “This is a joke, right? He can’t be serious.” He was the only candidate who failed to visit the 51st (and most heavily subsidized) state, Israel, deferring to RSVP Netanyahu’s invitation with a terse “I’ll visit after I’m elected.”

What had looked to be a snoozefest of an electoral season really sprang to life when it looked like Trump might have to face off against Bernie Sanders. Two wild cards, clearly not party hacks, both talking about issues that really matter to people instead of which public bathroom I should use if I think I’m an Asian lesbian raccoon trapped in a white human male body. Sanders would’ve forced Trump to up his game. The reality TV tricks wouldn’t work on Bernie, because the old coot is real, he’s not some market researched corporate windsock. I registered Democrat so I could vote for Bernie in the primary. After 20 years of accusations of being a Nazi, I really enjoyed voting for a Socialist Jew from Brooklyn. I’m a big fan of irony. You have to be to really enjoy history.

When Israeli dual-citizen Debbie Wasserman Schultz rigged the DNC primaries to hand the nomination to the Norma Desmond of American politics, I knew it was going to be Trump. She handed him this election. I called it months ago: Sunset Boulevard.

When the Soros-funded Black Lives Matter hustlers declared that all white people are racists, I didn’t argue with them. I read Malcolm X when I was 12 and he was a huge influence on me, right down to where I choose to sit in a diner, but never mind that. I’ve always had a bug up my ass about Nazis, never liked them, but thanks to BLM, I started visiting Daily Stormer because of the sheer weirdness of Nazis with a sense of humor. One thing the Nazis have always said gained new significance to me: Your skin is your uniform. I didn’t choose it, and I have never particularly identified myself as “white” before now. BLM had a big hand in electing Trump, especially when they made Bernie look weak by storming the stage and seizing the microphone from him during one of his rallies. The Left in this country has degenerated to the point where they attack their allies. Forced into a choice between Bolsheviks and Nazis, I’ll go with the Hugo Boss uniform.

I’ve always been very actively pro-choice. I’ve physically defended clinics. I marched for the ERA in the 1970s; I’m an equity feminist. I was out of the closet as a total libertine before Stonewall, and “libertine” is my preferred gender identity. The goddamned wretched victim cult LGBT Feminazi crowd can kiss my cis-gendered patriarchal white male ass. People who’ve never been beaten or tear-gassed for their political stance are in no position to critique my social justice credentials. I don’t go to demonstrations anymore because I’m too old to run and they’re as obsolete as petitions, but I do vote.

Taking my cue from the detestable Identity Politics of the Frankfurt School Left, I vote my own interest. I no longer give a flying fuck about your precious Roe v. Wade. I don’t give a rat’s ass about what you do with your body at night or your fucking preferred pronoun, and your racial identity doesn’t mean anything to me. I take people on their individual merits, as I’ve always done. Go ahead, call me a racist, call me a sexist, call me a Nazi: I won’t argue with you. Where I come from, we don’t worship victims. We worship heroes. That’s why I voted for Trump. Deal with it.