What Will Trump Do? 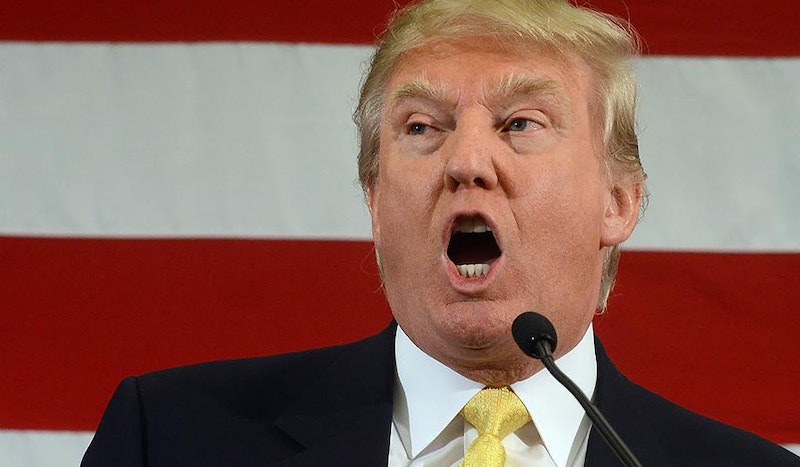 People have suggested that Donald Trump may not do too much damage as president. After all, he’s erratic. He’s so erratic, they say, that he may lose interest in the job, just wander off and quit. Or, they say, he may lose interest in the work and stick to fanfare and noise. I don’t find these thoughts convincing. They’re descendants of the pre-election fancy that Trump secretly wanted to lose because he didn’t feel up to the job’s responsibilities. Trump wanted to be president and he still wants to be president. He’ll go on wanting this job—the world’s top prize, its most prestigious plum—until he’s dead, and he won’t be dead for a while. And while he holds the job, he’ll do with it whatever he wants, and what he wants will be no good because he’s no good.

Trump doesn’t believe in the policies he’s put forward, some people say. Therefore, they say, we don’t have to worry that he’ll act on those policies. But he knows what his voters want, and that’s for the dark people to get pushed around. Trump himself has a firm conviction that America’s been pushed around, specifically when it comes to supporting NATO and America’s other allies. He’ll act on that belief and Russia will benefit. If you’re dark and living in America, or if you’re any color at all and a resident of the Baltics, President Trump will make your life a nightmare.

Meanwhile, they’ll be sharing the same nightmare as the rest of us. An erratic president is really not a good idea. An erratic, spiteful president is even worse. Imagine giving a maladjusted, childish, thrill-seeking, vindictive 15-year-old the world’s most souped-up automobile, one with special attachments that level buildings and throw people in prison. He’ll find things to do with it. He’ll never stop. Every time somebody looks at him the wrong way, he’ll find something to do. Trump has a highly reactive personality. So far all he’s been able to react with has been his mouth and, sometimes, his lawyers. Not anymore.

Here’s something I said in February: “If he can’t handle Twitter, please don’t give him nukes.” I’m happy to say that President Obama and Hillary Clinton voiced similar thoughts a little down the road. Not that it did much good, since a whole lot of people didn’t listen. Anyway, here’s another thought: Nobody is safe.

Apology to the English.  After the Brexit vote, I wrote a piece gloating over the gullibility of the English. Then I wrote a second piece, one explaining myself because an Englishman on Facebook had taken strong exception to the first piece. Now that America has committed its monumentally stupid and reckless act, I will follow up with a third item. This is what I messaged to the Englishman via Facebook:

“Daniel, remember me? I’m the fellow who wrote the piece mocking the English because they fell for Brexit. You and a lot of other decent people were in misery. Now that I’m in misery, it occurs to me that making miserable people feel worse is not a good use of time. I wish you the best, and I hope you and Britain manage to struggle out of your mess.

“I’ll add that Britain screwed only itself. By putting Trump in charge, America threatens the safety and well-being of the entire world. It’s a shameful day for us and a terrifying day for everyone.”

Never heard back from him. Well, I suppose it doesn’t matter.