When The Baltimore Sun Was a Top-Ten Newspaper

It’s all there in The Life of Kings. 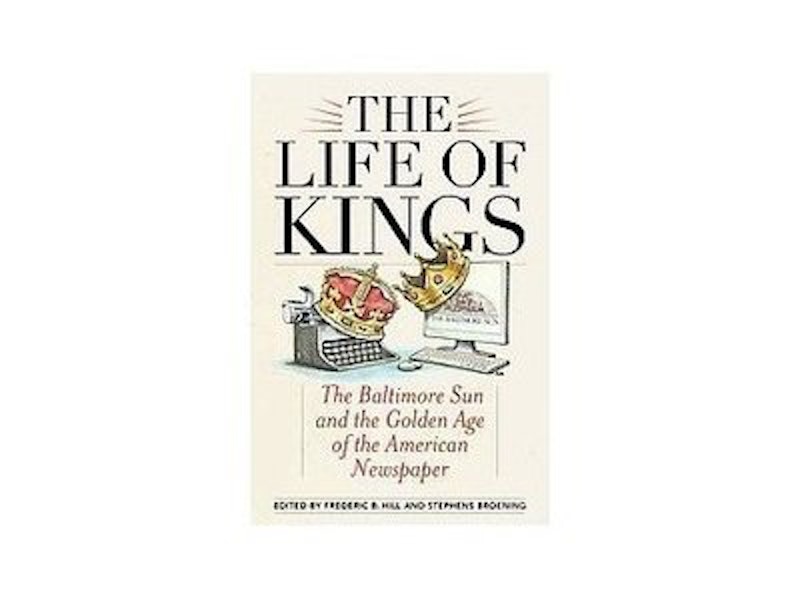 Here’s odds-on money that I’m the last reporter standing who was hired twice by the Baltimore Sun and never worked there. The first time, the fickle finger wiggled in a different direction from reporting. And at the second offering, I was done in by a rival columnist. And there was a third time, too, when The Sun’s city editor who proffered the hire was out-maneuvered by the political reporter I was to replace.

I recite this ancient resume fodder more out of envy than regret. For if the segue from The News American, where I was resident kick-ass reporter for nine years, and later a columnist, had materialized, I might have—emphasis on might have—found myself today as a contributing essayist between the covers of The Life of Kings: The Baltimore Sun and the Golden Age of the American Newspaper. I’m jealous.

I’m late getting around to this 2016 book publication, but hooked nonetheless, deeming it worthy of notice to newspaper aficionados and lovers of prose ranging across the scale from solid to sparkling. The Life of Kings, and I pack the credentials to dispute the ironic implications of the title, fits a number of check boxes—adventure, romance, thriller, tutorial, history, mystery, autobiography, war story, memoir, finance, diary, and a sly lesson on what in the old days was called creative writing, the expense account. In other words, The Life of Kings is a 27-author romp.

Beneath the bravura and the improvised John Wayne swagger, The Life of Kings reveals another layer, too, a well-concealed identity crisis. Newspapering is not an adult profession. It’s a trade in which it’s possible to see how close to the surface the child in all of us is. (And here I split hairs: Journalism is how television reporters describe what they do; newspapering is what pick-and-shovel reporters do.)

The Life of Kings, a phrase borrowed from H.L. Mencken, was conceived, nurtured, assembled and edited by two superbly accomplished Sun alumni who also contributed essays to the collection, Frederick B. Hill and Stephens Broening. They called upon certain of their colleagues to tell tall but terrifically true tales of adventures and experiences that seem far-fetched and unbelievable in today’s newspaper world that is run by accountants and the MBAs in mergers and acquisitions. In that sense, The Life of Kings is a remembrance of things past, bylines in the new world order of bottom lines.

The nostalgia, often wrapped around extreme danger, or good humor, or both, brings together once again a Pulitzer Prize winner, several Pulitzer nominees and finalists, a couple of Neiman Fellows, an Edgar winning novelist, and an authentic genius who has a McArthur Foundation Grant to prove it and who amuses readers with his antic boredom, cussing the list of police district phone numbers that eventually made him rich and famous.

The Life of Kings is pointillism with a point. From Joseph R. L. Sterne’s organic study of The Sun’s negotiated decline and fall, to the bittersweet finale of John S. Carroll’s speech to the American Society of Newspaper Editors, the human delivery system of news to the public is front and center on every page, in those days damn the expense. Tony Barbieri includes a stove among the provisions he’s shipping to Moscow for a long stay. When an editor questions the unusual item, Barbieri explains that The Sun bureau’s Russian driver has renovated his apartment and would like an American stove. The editor, Paul Banker, replies, “It’s for Leonid? Why the hell didn’t you say so.”

And the late Robert Timberg, the White House reporter during the Reagan years, recalls The Sun’s pride over its reportage of important foreign and diplomatic events. For a conference in Geneva, for example, The Sun assembled a pop-up bureau of six reporters and an editor to relay to readers the meeting between President Ronald Reagan and Russian President Mikhail Gorbachev for which it won an award. In those days, The Sun had nine foreign bureaus; today it has none. In bygone days, The Sun had the second largest bureau in Washington; today it has one reporter chasing local angles to national stories. It has no county bureaus whereas it once blanketed the state, including the tundra of Western Maryland. Out-of-town corporate ownership has decimated the product to enrich the shareholders. Sandy Banisky’s piece, “Tribune: The Rupture,” documents Chicago’s raid nickel by pinched nickel.

Closer to home, The Sun stationed three, often four, reporters at the State House in Annapolis during legislative sessions, with frequent visits by beat reporters on specialty legislation. This occurred during the days when five daily newspapers regularly covered Maryland, and the State House—probably one of the best-covered State Houses in the nation. The Sun’s coverage bracketed the downfalls of Govs. Spiro T. Agnew and Marvin Mandel (for whom I was press secretary and the temporary detour from journalism that I took when The Sun’s first job offer was deflected.)

It used to be observed of The Sun that it was a lousy place to work but a great place to be from. In its glory days, those that The Life of Kings embraces, The Sun was regularly ranked among the 10 best newspapers in America. As its past began to fade along with the industry as a whole, its reporters scattered too—to The Washington Post, The New York Times, The Los Angeles Times, and, heaven help us, to public relations, evidence, one would assume, of their training and abilities. The end of The Sun began as a family feud. Nothing comes between good families like good money. (My own Baltimore newspaper, Hearst’s News American, ceased publication a day before The Sun sold out to The Los Angeles Times in May of 1986. The entire package was later subsumed by The Tribune which eventually fell into bankruptcy.)

The Life of Kings is a fill-in-the-blanks puzzle for anyone with a zest for Maryland politics. In Antero Pietila’s splendid riffing on the odd-couple bond between Former State Treasurer John Leutkemeyer and Black Power Broker William “Little Willie” Adams, there are fragments of information that Pietila could never have known that I’m familiar with only because my experience in government illuminated the curious friendship. Ditto Steven M. Luxenberg’s essay on the Pallotine Fathers and the Rev. Guido Carsich. Having been in the thick of it, I knew stuff that Luxenberg didn’t and could add to the narrative, making the read all the more appealing.

The contributing writers’ bylines are recognizable to a couple of generations of Sun readers. Among them: Arnold R. Issacs, Ernest B. Furguson, Barry Rascovar, Tom Horton, Gilbert A. Lewthwaite, Dan Fesperman, C. Fraser Smith, David Simon, Laura Lippman, Scott Shane and Sandy Banisky, among others. And there’s one contributor that I salute in particular, the enduring Muriel Dobbin. In 1968, I was assigned to Hearst’s Washington Bureau as the White House correspondent. I reported to the White House for my first presidential trip, terrified as the new kid among reporting’s great names of the day. Muriel spotted me, standing alone and probably shaking. She came over, chatted me up, took me by the hand and got me on my way. For that I’m forever grateful as I am to all my friends from The Sun’s past and present, especially to those who produced this thoroughly enjoyable book.

What goes around comes around. Completing this roundelay is a toothsome twist. The executive editor at Rowman & Littlefield who oversaw the publication of The Life of Kings is a gentleman named Jon Sisk. A year or so ago, Sisk rejected my manuscript—Shiksa: The Rise and Fall of Marvin Mandel—saying the story was “utterly fascinating” but 40 years too late. And here I am critiquing a book about a 180-year-old newspaper relic that Sisk helped to produce.