Does Trump Want to Beat Up the Freedom Caucus?

Got to pass that health bill. 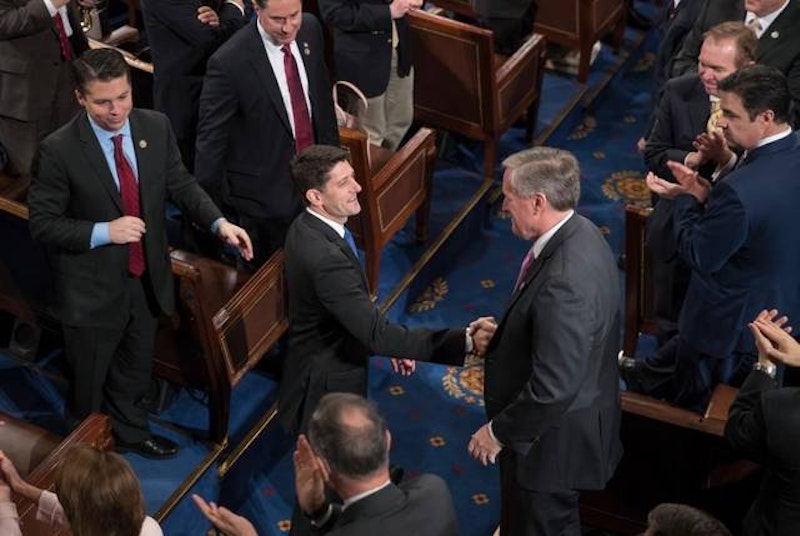 “He has unique capacities,” says a Republican in Congress. “I wouldn’t want to be the one he tests them out on.” The Republican, whose name we never get, is talking about Donald Trump. Maybe the speaker’s keeping his name back just to be extra doomy; his quote has a screenplay feel, like a military man (Ed Harris) warning about the hero’s ninja/Navy SEAL training. Or maybe it’s bad enough the fellow’s threatening his colleagues, and that’s why we don’t know who he is. At any rate, Trump has his eye on the Freedom Caucus. When it comes time for primaries, members who vote against the health bill may find Trump making campaign stops for their opponents.

That’s the threat recently described by The Washington Examiner. The article says the House whip team will present Trump with a list of congressmen who need persuading about the plan to replace Obamacare. Kicking things off, the article names a “possible target,” Rep. Mark Meadows of North Carolina. Meadows is the chairman of the Freedom Caucus, and he represents a district heavy with white voters living in the countryside. Congressmen from districts like these are the ones making trouble for the bill, one they consider insufficiently liberty-driven because it relies on tax credits and government regulations.

Many of these districts, including Meadows’, have been reshaped by GOP state legislatures to be more Republican. One result has been a flock of congressmen who can ignore their general elections but not their primaries—back home there are no swing voters in sight, but there’s always someone who can be madder at Washington than you are. Meadows has made such a point of being mad at Washington that he helped drive out the last speaker of the House. Most of the population would’ve regarded this fellow as right-wing, but Meadows and the other fire-brands considered him a squish. Now calling themselves the Freedom Caucus, the tribe wants to go on making trouble. But their voters love Trump, and Trump doesn’t want trouble.

Rep. Tom Cole of Oklahoma, who may or may not be the anonymous Republican concerned with capacities, gets down to business. “People have to decide,” he says. “Do you really want to hand the president a defeat on his first major initiative?” The good or bad of the bill doesn’t enter into it. If the bill doesn’t pass, the nation’s new boss will have belly-flopped in front of the public. That’s why the bill has to pass. Yet the bill would be bad news for those who love Trump and vote GOP.

White people who live in the countryside and don’t have money make up a lot of the people who get Medicaid because of Obamacare. Under the new bill, they wouldn’t get Medicaid. Obamacare’s subsidies, unlike the new bill’s tax credits, take into account the actual prices charged by the insurers near a given patient, and insurance prices in the countryside are higher because there are fewer insurers looking for business there. Come to that, the subsidies also get bigger as a patient’s income gets lower. The new bill has nothing like that. “The typical person who is going to lose the most in this scenario is a lower-income person in their 60s who lives in a rural area,” says an analyst with the Kaiser Family Foundation.

Consider the tough question posed by Fox’s Tucker Carlson to Paul Ryan, the current speaker of the House and the chief force behind the new bill. “I’m not leftist,” Carlson said, but he couldn’t help thinking. The new bill would seem to make the rich richer by undoing the taxes Obamacare put on them. “All the wealth, basically, in the last 10 years is stuck to the top,” Carlson said. “That's one of the reasons we’ve had all this political turmoil, as you know. It’s, so, kind of a hard sell to say, ‘Yeah, we're going to repeal Obamacare but were going to send more money to people who have already gotten the richest over the last 10 years.’ That's what this does, no?” Ryan’s answer: “I’m not that concerned about it because we said we were going to repeal all of the Obamacare taxes and this was one of the Obamacare taxes.”

Why, Tucker might’ve responded, did we promise to repeal the Obamacare taxes? But he let that lie, perhaps understandably. They’re taxes and they’re Obama’s, and we’re talking about Republicans. Ryan’s answer ought to make perfect sense to Carlson. What’s odd is that Carlson asked his question in the first place. After all, its premise is that income inequality’s a bad thing (“one of the reasons we’ve had all this political turmoil”). Nor did Ryan object to the premise.

Soon the man that the white countryside turned into a sort-of president may be touring the boondocks to sell its luckless inhabitants on screwing themselves harder. If so, it’ll be interesting to see how Meadows and other possible targets respond. After all, they object to Ryancare because it doesn’t leave voters vulnerable enough to the insurance industry—those rules and regulations, those tax credits. Will members of the Freedom Caucus stick to that line when the people being helped (somewhat) by the rules and tax credits are white shit-kickers instead of far-away blacks? I suspect the representatives who don’t cave fast will find themselves hammering other talking points, namely the many ways in which Ryancare doesn’t do enough for insurance customers. Meanwhile, Trump will be pushing his line, which is that the bill has to win so he can win. Either way freedom doesn’t really come into it. That’s just something Republicans like to talk about when they aren’t governing.