The Washington Post Attacks Its Own Redskins’ Deep Throat

Because remember: Going after your own paper’s anonymous sources is justified when they tell you stuff you don’t like. 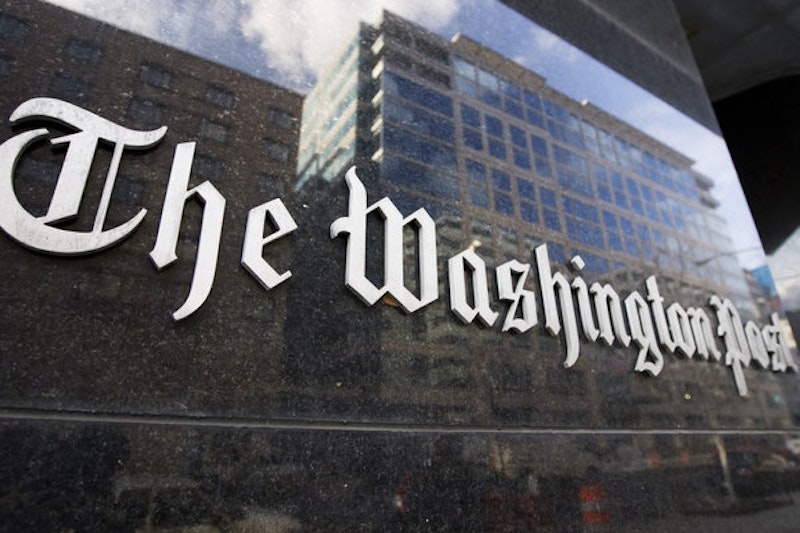 Why is The Washington Post’s media critic attacking the Washington Redskins? Not that rummaging for an excuse to do so is bad strategy for any writer in Washington hunting for clicks. But this seems to be about something else.

The Post’s Erik Wemple was interviewed on a local all-news radio station in D.C. on Saturday evening and proceeded to rip the Redskins over anonymous comments, reported by his own paper, from apparently a Redskins employee in the aftermath of the team’s firing of its general manager on Thursday. The source said the GM was fired for chronic alcohol-related behavior. But the Post seems somehow at war with itself over this.

In the radio interview, Wemple said the anonymous source “demeaned and belittled” and was “quite nasty” in his/her comments reported by the Post describing Scot McCloughan, the former general manager, who was fired during a crazed 10-day period in which the team rehired its coach, lost two talented pass catchers to free agency, and continued to absolutely not sign their quarterback to a long-term contract. (Here is Wemple’s column that lays out his views.)

Part of this is the expected pattern of how D.C. media cover such events in a way that every Redskins fan knows well. It is not just the reliable team bashing, days after the real news has gone down, as demonstrated this time by Sally Jenkins. Readers know the predictable list of sins by majority owner Daniel Snyder: He has on a few occasions overpaid aging and lazy free agents; botched the controversy around opposition to the team name; and alienated constituencies and political players he is going to need to build the new stadium he seeks inside the District.

This time, it seemed as if the Post’s writers intuited that it was again time to deploy the bash-Snyder narrative, even during appearances on other outlets, as Wemple did. But the added smacking down of the Redskins for speaking to The Washington Post: How does this make sense? What inspired such a response?

An official with direct knowledge of the situation attributed the decision to McCloughan’s ongoing problems with alcohol, which also led to his firing from front-office positions with the San Francisco 49ers in 2010 and Seattle Seahawks in 2014.

“He’s had multiple relapses due to alcohol,” said the official, who spoke on a condition of anonymity because he was not authorized to comment on personnel matters. “He showed up in the locker room drunk on multiple occasions. . . . This has been a disaster for 18 months.”

The Post reported that several players interviewed never saw the GM drink in the lockerroom. A lone player did tell the Post the GM was “frequently drunk.” McCloughan (pronounced “McClewan”) was not talking, though he was regularly spotted during his weeks of absence from team offices out walking his dog or at the gas station, major events that were photographed and tweeted.

Post columnist Jerry Brewer writes that the Redskins did not support McCloughan adequately in his efforts to battle his drinking. Brewer offered no explanation as to how he knows this, or why if this were the case the Post had not written about it before. Is the general manager of the town’s overwhelmingly most obsessed-about sports franchise a drunk? Did the Post know the answer to this before Thursday? If so: Why did it not report that it did? If the Post did not know: Why didn’t it?

From Brewer: “The callous and vindictive way Washington extricated itself from McCloughan—by fostering innuendo and then revealing ugly details to justify the firing—was no way to erase a complicated problem that it enabled.”

A former Redskin player, and now a sports radio talker, Chris Cooley, spoke briefly about McCloughan’s alcohol issues on the air a few days before the firing. Cooley works at a radio station owned by Snyder. The conspiracy story then became—furthered by Brewer and others—is that the team quietly handed Cooley a task: float the notion that the guy is a drunk. But Cooley denied this. Media members who shopped this around and still referenced later in the week had no proof. Cooley offered a detailed explanation and apology. (Which he owed no one.) But Cooley referenced an issue that everyone in the media who covered the team knew, or should have known, and which turned out to be, if not the truth, apparently very relevant, according to, again, the Post’s anonymous source (and at least one player). There is a competing narrative: that working with Allen is impossible, who it is said is controlling and demeaning, and that Allen fired McCloughan because they often disagreed on player moves. But why this cannot also be true here, in addition to any alcohol issues with McCloughan is, again, a mystery.

Wemple in his column does not address why there is anything inherently wrong about what the anonymous source said to the Post about McCloughan, if it is true. Only that it is “mean and reprehensible.” How? What is the issue here, particularly, with speaking aloud the phrase “alcohol abuse”? Certainly readers of The Washington Post have moved far beyond any stigma here. The NFL certainly has. McCloughan continually gets hired, even though his problem is apparently well known across the league. It was just not as well known to readers of The Washington Post, for some reason, until the last few weeks. Is that because the Post knew about the extent of his problem and chose not to report it? Why would they do that? The Post’s Jenkins piles on as well, writing that the comments from the anonymous source are “cowardly smearing assertions.” Does she understand the difference between assertions and evidence? If the source were Bruce Allen, the team’s president, you would think he above all others would have witnessed any of this. You would hope any journalist who would use such a charge of alcohol abuse in a story would first ascertain the nature of the evidence. That is the difference. Do you think Jenkins does not think reporters at her own paper thought to inquire into this, before deciding to go with the quote? Or that Post reporters are incapable of understanding this distinction?

Most fans of the team might wonder why this was kept a secret for so long. And many would absolutely prefer to have known it, after weeks of near silence from a D.C. sports media who are either lazy or complicit in a winking cover-up. Is the argument that fans should not know this? That only journalists should? And then only they may decide whether the rest of us are worthy of knowing what they know?

The inference is that there is something unique or taboo about a charge of an alcohol problem. There is not. Not anymore. We—meaning consumers of news—are over it. Why this causes major angst among news media is hard to understand. I trust the Post’s main story reporting the firing. I just wish they had done this 18 months ago, when their own source says this all started. Nailing down a trustworthy source who would confirm these issues over that time would not be easy, but is not that the charge for an experienced, major news organization?

Wemple writes: “Somewhere in the corridors of Redskins Park lies the truth about McCloughan’s tenure with the team.” Are you kidding? Why does that truth not reside on WashingtonPost.com? Former Post sportswriter Mike Wise, now with ESPN.com, tweeted: “Someone asked who Post reporter was that team trusted to gutlessly assassinate the character of Scot McCloughan. I don't work there anymore. “ Meow! Thanks Mike. Enjoy that Correspondents Association Post reunion after-party this year.  Another Wise tweet: “Another irony: In the time Scot McCloughan was alleged by team to have been a stone-cold drunk, franchise was emotionally sober for 2 years.”

So now it’s “stone cold drunk.” Can we get a charge of a Russian ambassador meeting in here too, by mid-week if we hurry? Or at least add a Wikileaks reference?

Cover-ups and anonymous sources are realities the Post should know something about. The use of anonymous sources justifiably earns the endless angst manufactured just about every time one shows up in a big story. But attacking such a source, when he/she speaks to a fellow reporter, is a strange coda to this already strange story.

Bad things happen to the Washington Redskins regularly. But readers deserve to know what journalists know. They can handle it. Just without the moralizing and the scolding.