What happens when words lose their meaning? 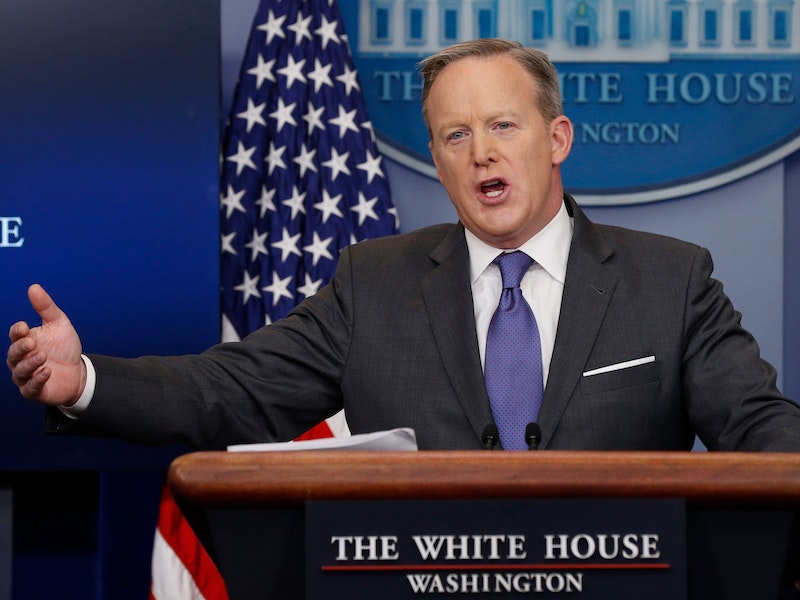 Sean Spicer told the media reps at his press briefing on Friday that the just-released jobs numbers are for real: “Yeah, I talked to the president prior to this and he said to quote him very clearly, ‘They may have been phony in the past but it’s very real now.'” Trump's press secretary delivered this gem with a winking giggle. The more fawning of the self-proclaimed journalists in attendance laughed along with him, happy to signal they were in on the joke.

The joke’s on the country, however. These new jobs are really Obama's, but that's not the issue here. Spicer was publicly acknowledging that you can’t take the president's words seriously, because he lies, which is funny to him. That Trump and his spokesman think this is funny isn't funny at all. The logical conclusion is that anything Spicer now says on behalf of the president is not to be believed.

Spicer couldn't get away with a joke like this in a healthy political environment. Not that long ago, even Republicans wouldn’t have accepted it. For Trump Republicans, who have placed all of their faith in one person, anything that pisses off the opposition seems fair. They’ve become lazy, relying on flawed heuristics like “the enemy of my enemy is my friend” to take the cognitive load off them. As the post-truth era becomes increasingly fueled by emotions on both the political left and right, it's​ moving closer and closer to that dangerous place where words become all but meaningless.

While the “enemy of my enemy” dictum can be useful in forming temporary strategic alliances, it's inadvisable as a method at arriving at the truth. Logically speaking, it's a category error—classify something in the wrong place in your mind and you can't think straight on it. The enemy of your enemy may very well not be your friend. It might also be your enemy. Maybe it's neither.

Crude, short-hand thought processes​ produce bad results. Trump supporters like to chant, “Lock her up.” They personalize everything, casting principles aside. It's exactly what Trump wants. His message is, “Trust me because only I can get the job done.” That's not how it's supposed to work. The American political infrastructure was created to deemphasize individual leaders in favor of ideas, many of which are spelled out in the Constitution.

Much of the American political malaise springs from the rampant identity politics currently in vogue. Left of center, they're focused on skin color, religion, gender, sexual preference, etc. “Truth” depends more on who's saying something rather than actual facts. A Muslim woman wearing a hijab has more credibility than a white man wearing a suit, no matter what they actually say. It then follows that someone like Linda Sarsour, who openly supports anti-women Saudi Arabia and has said horrifyingly sexist things about other women, is embraced as a legitimate feminist leader.

On the right, identity politics is now a matter of opposing enemies on the left. Russia is the enemy of the Democrats, who claim it rigged the election for Trump. Russia then becomes the friend of the right, meaning Sean Hannity can suggest the CIA used malware to attribute cyber-attacks to Russia, and Republicans don't call him a lunatic.

As Trump drags the nation, and the world, deeper into the post-truth era, it would be great to take comfort in the thought that the truth always wins in the end, but it doesn't work that way. Psychologists have long known that humans aren't oriented to using reason to seek a higher level of understanding. People use it to confirm their own biases. Add to this predisposition the mistaken notion that your enemies’ enemies are always on your side and there's no way you can think straight. Allowing your enemies to decide who your friends are makes no sense.

Aristotle defined humans as rational animals, but he never accounted for all the nonsense they produce using their reason. There's evidence that reason’s actual role isn't so much to enhance individual cognition but rather to foster communication within the group in order to reach a collective higher understanding. When opposing ideas are thrown into the mix, a dialectical approach can often yield effective political solutions. In some arenas, such as religion, no disparate voices are allowed. Then you get collective solutions like the enforcement of honor killings as proper justice when the daughter has run off with the wrong man.

Polarization has made the American political environment look religious. Faith trumps facts now. The president’s spokesperson speaks of alternative facts. Alex Jones gets respect from Republicans. Spicer thinks Trump's lies are amusing, and so do some journalists. The president says his predecessor wiretapped him, without offering any evidence. It's chaos. This all suits Steve Bannon, who's prepping Trump for the war between the East and West. He needs to keep the populace befuddled. When words lose their meaning, people start picking up weapons to express themselves.