When Mikulski Leaves, D.C. Will Be Quieter

Some will miss the East Baltimorean’s switchblade tongue. 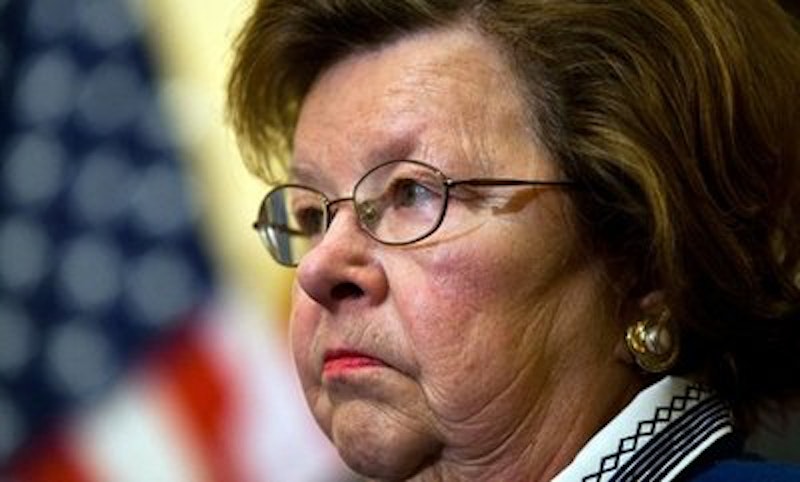 Barbara Mikulski, the U.S. senator from Maryland who decided to take the gold watch rather than raise money for reelection, lost just one election and that was in 1974 against Sen. Charles McC. Mathias Jr., the Republican who learned that the best way to beat Democrats was act like one.

It was in that election that Mikulski, the brawler from East Baltimore, earned her statewide chops. It prepared her for the toughest race of her career in 1986 when she became the first female elected to the Senate in her own right. Linda Chavez, her Republican opponent, accused Mikulski of being a “San Francisco-style, George McGovern liberal Democrat.” Anyone familiar with the politics of the 1980s understands that accusation was not intended as a compliment. Mikulski won, nonetheless, succeeding the man who defeated her 12 years earlier, after Mathias announced his retirement.

But in 1974, Mikulski entered the U.S. Senate race reluctantly while a member of the Baltimore City Council. She squared off against a certified war hero, Bernard “Bunny” Talley, also of Baltimore, a decorated (two Purple Hearts, two Silver Stars) jet fighter pilot who’d been shot down, captured and imprisoned at the Hanoi Hilton by the North Vietnamese for more than six years. Maryland Gov. Marvin Mandel (D) had worn a copper bracelet engraved with Tally’s name throughout the imprisonment, as was the custom of support for POW/MIAs back in the day.

Mikulski would occasionally appear at the same Democratic event as Mandel, always the star of the show as a popular sitting governor despite his marital difficulties at the time. Mandel was taken by Mikulski’s sparkplug personality and began privately expressing admiration for Mikulski’s energetic abilities on the stump. And soon he passed the word to have her appear at as many Democratic rallies as possible. Mikulski would become the warm-up before Sinatra.

Mandel’s staffers started sending his schedule of campaign appearances to Mikulski headquarters in quiet connivance to undercut Talley and to juxtapose Mikulski and Mandel on stage to mutual advantage. Mikulski’s campaign manager that year was Ann Lewis, sister of Barney Frank and a longtime friend of the late Joseph Napolitan, Mandel’s campaign consultant. Mandel’s second-in-command, Lt. Gov. Blair Lee III, had publicly endorsed Talley instead of feigning neutrality, as Mandel had, in a contested Democratic primary election.

Napolitan, at Mandel’s request, began advising the Mikulski campaign and including questions about Mikulski in his polling for Mandel. While the might and the money of the Mandel machine couldn’t save Mikulski’s campaign, the two, Mandel and Mikulski, became a formidable duo on the campaign trail—Mikulski hollering and raising hell to steam up the crowd and Mandel following up, in his low-key way, with policy speeches and lists of accomplishments. They were a mid-sized sight together, Mandel at 5’6” and Mikulski topping out at 4’11”. It was a beneficial union made in the back rooms of Baltimore politics.

Her legend and legacy are written not so much on monumental legislation as in the incidental benefits that a senator can deliver for her state, such as federal funding, building projects, programs and even, in Mikulski’s case, a new fire house for Dundalk—in a word, pork. It’s the little things that constituents remember. She also introduced women’s pants suits to the normally skirted and pinstriped bastion of decorum.

And now her announced departure following the 2016 elections has set off a chain reaction of candidacies to succeed her, a long list of political who’s who—and who’s not—that reaches from Capitol Hill into the ranks of the State House and clear down to the precincts of Maryland. So far, only Rep. Chris Van Hollen (D-8th) has formally announced his candidacy and is moving rapidly to close ranks. It’s not the shoes that will be so tough to fill, but Washington will be a little quieter with Mikulski gone.

Mikulski’s switchblade tongue has often gotten her into trouble and revealed a dark side of her character. She can be bitchy, nasty, mean and moody. Washingtonian magazine, in its annual listing, has repeatedly chosen Mikulski as the meanest member of Congress. She brutalizes staff members and has had difficulty holding a staff together. And back in the 1980s, she hired a feminist crusader, Teresa Brennan, who caused such as public uproar over her “anti-male” views that Mikulski eventually was forced by the furor to dismiss her. Mikulski explained that she initially hired Brennan because she’s an “idea junkie.”

Through it all, Mikulski’s voice has never lost the chipped edge of East Baltimore. She swings easily from the salons of Washington to Jimmy’s at Fells Point without losing a high-pitched decibel. And she comes home to Baltimore every night, both a curse and a blessing bestowed upon the Maryland delegation to Congress—to be near constituents and risk being swamped by demands from them.

Mikulski’s favorite campaign technique is to put on frumpy bag-lady clothes and visit a different supermarket every Saturday where, toting a shopping bag, she vamps the aisles, squeezing avocadoes, mangos and oranges just like any other thrifty shopper, glad-handing and chatting all the while. Predictably, as if on cue, shoppers are bedazzled over seeing a U.S. Senator doing her own everyman’s Saturday chores just like, well, they are.

As every student of Baltimore’s history knows, Mikulski is an accidental politician who began adult life as a social worker. She earned her chevrons by performing every word and deed but lying down in front of a bulldozer to block the proposed East-West Expressway that would’ve ripped through her Fells Point neighborhood. Her entry into politics came at a time when the likes of Dominic Mimi DiPietro was complaining about community activists, often underwritten by federal grants, were upending established politicians like him. DiPietro actually tried to block Mikulski from running. But as times were changing, Mikulski won a City Council seat in 1971, representing East Baltimore, along with DiPietro, back when there were three-member districts and what was then called the “Fighting First.”

Since then, Mikulski (with the exception of 1974) has won every election with at least 60 percent of the vote and remains, in virtually every poll, the most popular politician in Maryland. At her news conference in Fells Point, Mikulski pretty much summed up her life and her career when she explained how she decided on retiring rather than seeking a sixth term: “Do I spend my time raising money or do I spend my time raising hell”? Rhetorical or not, Mikulski answered her own question.