When Mario Cuomo Visited the Office

He looked at me and shook his head. 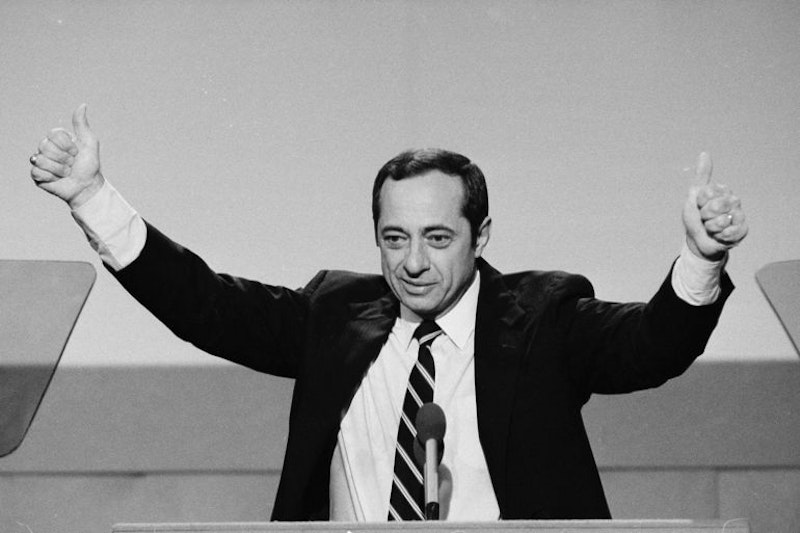 Mario Cuomo stopped by the office one time, back when I fixed commas for a trade paper and he ran New York. Why did he choose us? Well, the paper covered municipal bonds. New York had some bonds to sell and the economy had tanked, so maybe he was making a special push. At any rate, there he was.

He sat for an interview with our top people and then visited the newsroom. Everybody on staff clumped around him, filings around a magnet; every desk was deserted and the phones rang. He was famous, and up close he seemed like he ought to be. I hear that famous people often shrink when you actually see them. Cuomo wasn't like that. No, he wasn't tall. But he was large, and he looked sleek and expensive. He had vast hands and his shoulders bulked under his dark suit. Really, he came off as more important in person than he did on TV or in photos. It was like you saw him through a lens that made everybody else fade back.

The staff was mainly a bunch of young bucks, most of them Catholic, and the governor joshed with them. He did this one by one, choosing this fellow and that. It was like landing on the Jumbotron; when he spoke to you, you were on display. What he had to say was routine, pretty much. Asking about towns and neighborhoods. “Sunnyside?” he said. “Yeah, I got you guys a playground.” That was the style he adopted with us: Let's not shit around, I get results and we know what those results are. Another young buck lived near Astoria. “What's the church there?” the governor said. The young buck turned white, or whiter, and his smile didn't move. “Yeah, you don't know,” the governor said, dismissing him. It was a Catholic thing. The governor had just shown him up because the young buck didn't go to church.

That was the non-routine moment from his stop. The buck in question was our managing editor's fair-haired boy and as nasty and arrogant a character as I've come across. I don't know how Cuomo singled him out for the treatment; maybe it was luck, maybe he could tell something about the mouth. For me the moment was a lesson in people's frailty: even a high-flyer could be brought low when the lights were in his eyes. But I didn't get any thrill from the experience. I am not a forgiving person, but I find that meanness is never fun to watch. It doesn't matter who's getting it in the neck, there's still something out of place.

The governor's meanness was small, just a flick he gave somebody at a disadvantage, but why do it? Because that's how he was. “His personality was a paradox, pairing as it did a public largeness of spirit with private pettiness, even cruelty,” writes Politico. No denying that. “The first time I remember him he was standing on the steps outside school, making fun of me for being a shrimp,” said our senior reporter before the governor's visit. The reporter was a jolly bantam-size fellow with silver hair, and he took a certain pleasure in speaking of “Mario,” his old classmate from parochial school. (He also liked talking about “Wolfie,” who was Tom Wolfe and had researched Bonfire of the Vanities with our staff.) But his voice tightened for that one sentence.

For my part, I just stood against the wall and hoped the governor's eye would pass over me. It did, almost. I was 30 or 40 pounds overweight and my hair stuck out like a bush. If I had on a shirt and tie, the shirt was probably not tucked in. I think he gave a minimal shake of his head when he saw me. But I was used to that kind of thing. Actually we had met before, years ago when he was running for governor the first time. I was thrilled that this brilliant man from Queens was standing up to the right during the age of Reagan. I weighed less then and my hair didn't do anything strange, but I had just seen him speak and was a bit carried away. So things didn't go well. I meant to say, “You're great,” which would have been blatant but heartfelt. Instead I said something like “Yew gray! Yew gray!” He looked at me and moved on.

As my 20s wound down and my life got rocky, I noticed that he wasn't doing so much as governor. People liked his speeches, for whatever good they did. I didn't really care. On a Sunday afternoon, fat and bushy-haired, I got high and read a biography of him written by a friendly professor, somebody who had talked at length with the governor and his circle and quoted them to show the governor's gifts. What came through for me was the resentment, the sense that this man had his elbows out with everyone, even his wife and children. By the time I was done, I had finished with Mario Cuomo. Of course, I had stopped being enthusiastic about many other things in my life.

I like Barack Obama and I'm glad he's in charge rather than someone else. But Mario Cuomo was the only living politician I've ever been excited about. Probably I shouldn't have been. How much difference does it make?