“We Love the Troops, But We’d Rather Not Think About Them”

James Fallows on the civilian-military disconnect. 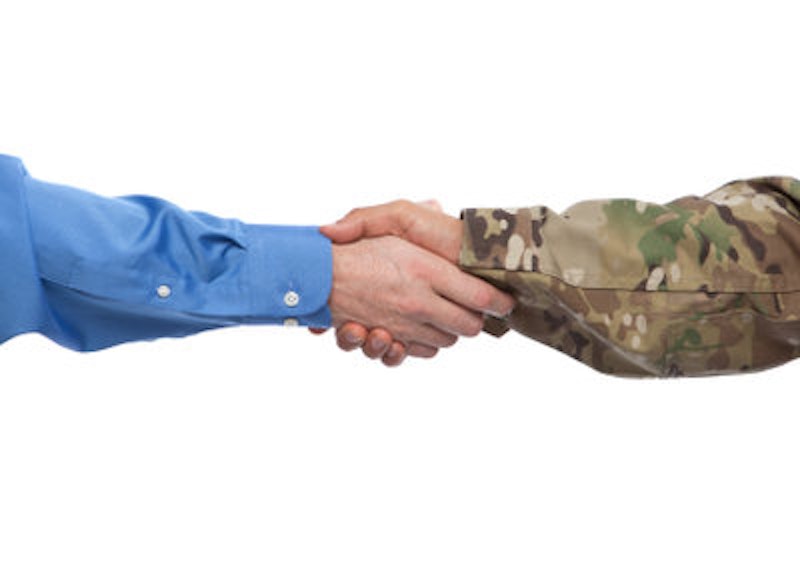 After fighting for a decade and a half, after spending as much as $6 trillion and counting, America can point to a single lasting victory in the forever war: the death of Osama bin Laden, a man who wreaked hell on us with some box cutters. That's the situation as laid out by James Fallows in the latest Atlantic. America is doing something wrong which involves the military, the one institution that Americans say they love.

Fallows says that the heart of the problem, the reason America keeps fighting and spending and losing, is that the great American public has very, very little skin in the game. A small volunteer force carries around deluxe weapons, super-weapons that bring quick victories. Yes, the victories dissolve because the soldiers are led by unaccountable brass in foolish, no-win struggles against populations on the other side of the world. But back home this doesn't matter so much. Developing and building a stream of high-priced weapons means jobs for voters, which means votes for fortunate senators and congressmen. A stream of military setbacks produces dismal headlines but no critical mass of tragedy. That's because very few people have a brother or daughter or cousin who's dying overseas.

America doesn't have too many farmers anymore, but it has a lot more farmers than it does soldiers—roughly four million to 2.25 million, by the article's count. Soldiers weren't always such a tiny sliver of the population. “Among older Baby Boomers, those born before 1955, at least three-quarters have had an immediate family member—sibling, parent, spouse, child—who served in uniform,” Fallows tells us. “Of Americans born since 1980, the Millennials, about one in three is closely related to anyone with military experience.” He traces large results from this simple change. When there was a draft, most Americans knew something about service and the military life, including the sad fact that the people in charge can screw up. Now such facts have become remote, and so have the consequences of the screw-ups, including those screw-ups committed by the very highest people in charge, the politicians who decide when we go to war.

As Fallows sees things, and he makes a good case, Americans now idolize their warriors while treating them as if they were disposable. Or, in his words, “We love the troops, but we'd rather not think about them.” I'll embroider on his point. Supposed adults tell us we have to say “Thank you for your service” to anybody wearing a uniform, and then the heroes get packed off for more futile and therefore non-heroic fighting in places the public will never care about. The damage the fighting does to them makes for more dismal headlines, but again no critical mass of tragedy. The Veterans Administration was a scandal under George W. Bush, and eight years later it's a scandal under Barack Obama, and the only sure result is that Jon Stewart has plenty of outrage material.

The country, Fallows says, “will spend about 50 percent more on the military this year than its average through the Cold War and Vietnam War.” That's in constant dollars, with inflation accounted for. Yet, he warns, “The Pentagon faces simultaneous crises in funding for maintenance, training, pensions, and veterans’ care.” Note how many of those categories have to do with the men and women who serve.

Easy war. Meanwhile, the country keep finding new enemies to fight, and it does so with a minimum of deliberation. Fallows doesn't make the point, but President Obama launched his war against ISIS under the very same authorization that Bush used for his invasion of Afghanistan, an authorization that Congress passed 13 years ago. Not too many lawmakers or citizens seem to mind his use of that ragged bit of paper. Fallows does make the point that Congress rushed to approve the one piece of the new conflict that Obama put before them. It took a brief couple of days in September for lawmakers to say yes to sticking America's toe in the Syrian civil war.

Apparently there's nothing to think about when it comes to the military. As Fallows points out, the parties can't agree on highway trust fund legislation that's more than a stopgap. Yet the House Armed Services Committee voted quickly and without dissent for the nation's latest defense budget. Look through congressional races or presidential debates, he tells us, and the subject of peace and war ranks as a B attraction at best. A non-defense boondoggle like Solyndra hits the headlines; a major spending disaster like the F-35 jet does not, even though it could cost taxpayers (in Fallows' estimate) a hundred times as much.

Finally, the article notes “tension between rising adulation for the military and declining trust in most other aspects of government.” My somewhat free translation: the people with the mighty weapons may eventually give orders to the rest of us, and we may want them to do that. Americans still think the military knows what it's doing, whereas we've caught on to all other parts of government. No matter how many bad headlines our military fumbling generates, they don't match the weekly pile created by our increasingly shambolic political system.

What to do. How to get civilians and military back together? Fallows doesn't have much to say on that. He quotes Admiral Mike Mullen, a former chairman of the Joint Chiefs of Staff, to the effect that the United States should continue reducing the number of personnel on active duty. Mullen: “The next time we go to war the American people should have to say yes. And that would mean that half a million people who weren’t planning to do this would have to be involved in some way. They would have to be inconvenienced. That would bring America in.” Mullen's retired, of course. Brass with operational responsibilities probably don't want extra inconvenience when responding to a crisis. Neither would politicians or the public. One reason America now has a crush on its soldiers is that we know we can be hit at any time and that thought scares us badly.

For his part, Fallows recommends a commission, some fiddling with “the decision-making process for use of force,” and a determined program of talking by the President, who “must explain the role of the soldier to the citizen and the citizen to the soldier.” This last item is listed as “Restore the civil-military relationship.” Well, sure, if you're worried that there's a military-civilian disconnect, you’d certainly want to restore the civil-military relationship. But if the answer hinges on a lot of talking by Barack Obama (or George W. Bush or Hillary Clinton or Jeb Bush or anybody else), we are in serious trouble.

One answer Fallows does not offer is the draft. The idea is unthinkable at this point, a third-rail notion like nationalizing Wall Street or giving up nuclear weapons. The public does not want to fight, and who can blame them? A system that throws away dollars could throw away lives before enough Gold Star Moms write to congress and demand action. The problem with the current situation, as Fallows defines it, is that the military hasn't taken enough civilian hostages to keep the public paying attention. But a great rule of life is to stay out of hostage situations.

Which leaves... what? Stop fighting. But that's not going to happen.