Once Again, The Nation Plays Cinderella

Cough up your dollars or the Koch Brothers will stage a coup. 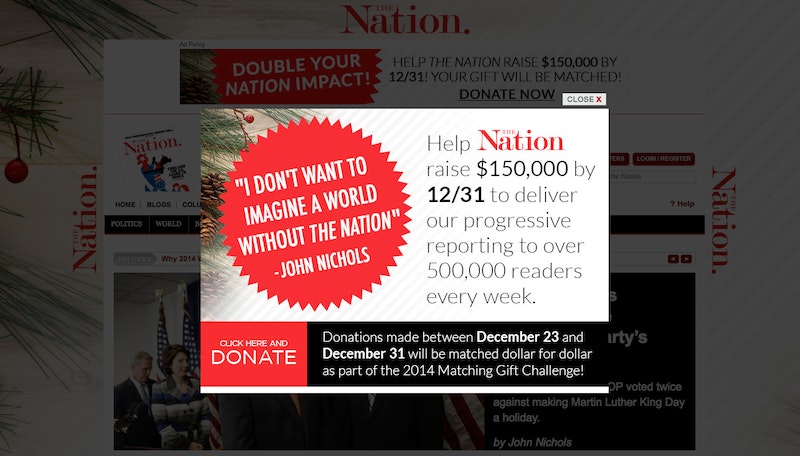 I’ve let my subscription to The Nation elapse—the sanctimony of Eric Alterman and Katha Pollitt, sadly no longer offset by the iconoclasm of the late Alex Cockburn, is more than this reader can digest—but for whatever reason I haven’t unsubscribed to the magazine’s emails. And they come in bunches, especially every December, trolling for dollars to continue the staff’s mission to provide a “beacon of truth and substance.” Not to mention solidarity! And I’d guess it’s the comedic value of these earnest and “progressive” messages that keeps me hooked. Really, they’re far more entertaining than the magazine itself.

As the clock ticks toward midnight, Nation representatives have warned email recipients that the magazine’s very existence is at stake—as if this were a unique problem—and that if they don’t raise $150,000 by the end of 2014 there will be dire consequences. The likes of editor and publisher Katrina vanden Heuvel, Washington editor George Zornick and staff writer John Nichols are cagey: will The Nation turn into a pumpkin at midnight and cease publishing? No one says.

Nichols’ Dec. 26 pitch begins: “A world without honest, thought-provoking, progressive journalism, where corporations and the politicians and pundits in their pockets rule unchecked and uninvestigated… I wouldn’t want to live in that world.” So is Nichols going to say goodbye cruel world and take a header off the top of the Capitol building if the funds aren’t secured? I’m skeptical. Also, if you read The Nation online, as I occasionally do—to keep myself honest—its writers rant and rant about corporations and dirty pundits non-stop, so apparently that world already exists.

Dear Katrina is even more churlish in her Dec. 23 letter: “Last year we were hit with a postage increase of $120,272, and this year we’re dealing with increases in expenses in many other areas. The cost of quality journalism [which is subject to debate, but I digress] grows each year, and it becomes more challenging and expensive to deliver our stories to your screen and into your hands. More readers than ever before are reading and sharing our stories through social media and aggregator sites, which leaves us to pay the editorial costs even as revenue shrinks.”

What the devil is she saying? That The Nation is pissed that other online sites link to their articles? I thought that was a goal of social media! Granted, most of us from the print-exclusive days—and the 1990s rocked hard!—require three or four showers daily to get rid of the current media industry’s stench, but isn’t this incessant (and obnoxious) cry of Nation doom getting close to chicanery-mode? In truth, Daily Kos has eclipsed The Nation for readers so inclined, so aside from the magazine’s employees, I doubt anyone would notice if the publication started in 1865 was shuttered. In addition, surely there are “progressive” multi-millionaires who’d put up the pittance, to them, of $150,000 every year to light the screen of John Nichols.