The Nut Who Changed America

Who started the 1960s? A right-wing Arizonan and his army of political fanatics. 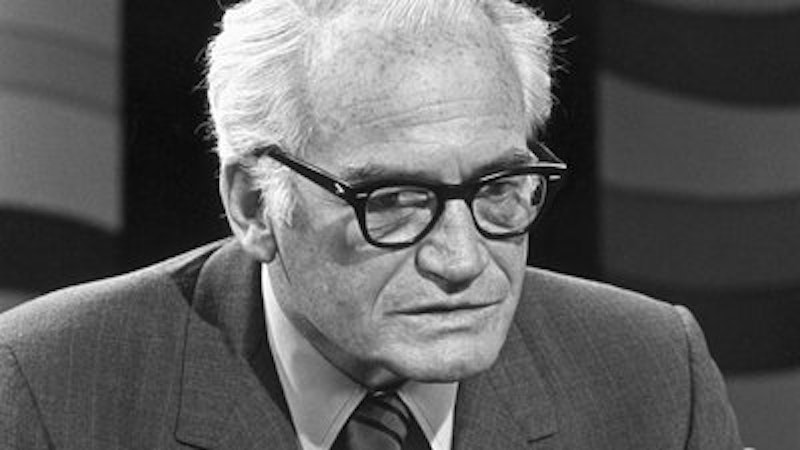 A man with a cowboy hat and a rifle ran for president 51 years ago. His name was Barry Goldwater and people loved him. Certain people. For example, people who thought ex-President Dwight Eisenhower was a secret agent of the Soviet Union. People like that thought Sen. Goldwater was the wave of the future and would change America. Oddly enough they were right.

Goldwater lost very badly in 1964, and now he's forgotten except by those few who care about long-ago presidential outcomes. But Rick Perlstein's Before the Storm argues that some big things started with the senator. At the time, the important people were saying that we had nothing to fight about anymore, that the broad public and the top decision makers had reached agreement about everything that counted. The people who differed about the important things—about the value of free enterprise and the necessity of labor unions, the dangers of communism and the splendor of inoffensive free speech, the equality of the races and the need to wait a long, long time before said equality showed up—they were a collection of curiosities. They were there to be pointed at.

To be listened to, these people had to act. Thumb-sucking journalists used to ponder when the 60s became the 60s, with the riots and the drugs and communes and the rest. That moment was the Goldwater year, 1964. Yes, The Beatles came to America and that was important, but the election was a big part of it too. At first glance you might not think so, given that a mainstream Democrat beat a crazy Republican and did so by a giant margin. But that election was when the country discovered a rip down its middle, a rip that would keep growing.

The GOP's reason for nominating Goldwater was simple: a lot of unimportant people worked like hell to make it happen. This was before the modern system, where party members vote on the nominees. Back then the Republicans would make their choice after Wall Street lawyers, corporation presidents and top party operatives got in a room and argued themselves into agreement. The rest was a matter of telling convention delegates which way to vote. But if enough people really cared, they could fix it state by state so that the delegates who made it to the convention wouldn't listen. This had never happened before; the reason being that an immense jungle of rules decided who became a delegate. Only fanatics would master the rules and then work them to produce a nominating majority. But those fanatics had now arrived and they loved Barry Goldwater, the excitable man from Arizona who had been warning for years that government-built dams and aid to public schools would make America a collectivist hell.

These weren't the people at the top of the Republican Party. They were at the bottom. That's why they were so dedicated. They felt like the country had turned against them, and they felt even worse about it because they had always figured it was their country. We're talking people in small towns and small cities who counted for something—business owners and so on. And their kids, and other kids who ran into modern-day bureaucracy at college and were freaked out. Nothing went the way it was supposed to, with one person calling the shots in his life. The college kids were slotted and processed by college bureaucracy, the small-town big shots had to deal with unions and federal laws and regulations. So they decided the country had to get back on course, and the first step was electing the man with the rifle and the cowboy hat.

The old guard of the Republican Party didn't know what hit them. For years they had figured they could do what the Democrats did, use government to spread the wealth a little but not too much, and do it without wasting money (because they all came from private enterprise and supposedly they knew how to run things tight). Their idea of a hot contender was somebody who came off like John Kennedy, a Democrat. Now the country had spent three years in love with Kennedy and was mourning him because he had just been shot. His successor, Lyndon Johnson, was talking about how he'd do all the things Kennedy tried to do. The old-line Republicans couldn't outbid that and didn't know what else to try.

This basic confusion was combined with an epic run of bad luck. One of the GOP's would-be stars, Nelson Rockefeller, had become a has-been by dumping his wife for somebody 20 years younger, a woman who dumped a husband and four kids to throw in with him. Another contender was stuck in South Vietnam, where he presided over the growing disaster there as U.S. ambassador. Another was repeatedly assured by Dwight Eisenhower, the leader revered by all the party's non-crazy members, that he was the man to save the Republicans from Goldwater. Finally the poor chump decided to go ahead, and Eisenhower told him over the phone that now, no, he didn't think he should run.

Meanwhile, the activists dragged Goldwater to the finish line. They knew they wanted him to run long before he made up his mind, and they called all the shots until the Republicans officially picked him. At which point he pushed the activists out of the front ranks and had his own people run the campaign, with disastrous results. Not that he could have won. Goldwater had said so much against big government that voters didn't trust him with Social Security. Worse, America and Russia had nuclear missiles pointed at each other. Being a straight-shooting individualist gets a lot scarier when the other side can shoot back and blow everything up. Under Kennedy the country had spent a couple of very frightening years before the Russians got the message and stopped trying to push things. We had come that close, and nobody wanted to risk it again. Except Goldwater and his fans.

So the Democrats wiped him out. It was 61-39 percent, a killer. You'd think that meant everyone really did agree, just like the experts said. Well, they agreed that they didn't want to die. But they were scared of some other things, and over the next few years they would get even more scared. The right-wing nuts weren't the only people acting up. The civil rights movement was getting somewhere, and the TV shots of black bodies swarming over public places made a lot of whites jumpy. The Democrats followed through on Kennedy's commitment to pass laws enforcing the right of black Americans to vote and to live in equality with whites. Good, but being on the side of the blacks meant being on the wrong side of many, many whites. First in the Deep South, which had never voted for Republicans but was now the only place where Goldwater won states instead of losing them. And soon enough throughout the country. George Wallace, the governor who tried to keep the schools white in Alabama, was supposed to be a clown and a jerk, at least if you listened to official opinion. But he went north and crowds treated him like a rock star. In a few years they'd be voting for him.

Everybody didn't agree after all. There was going to be a giant fight over the country's direction. Early on, the side that got the most notice was the left; after all, the ghettos and colleges were blowing up, and hordes of skinny young people were making a great noise about their sex lives. But an army of citizens had already marched into politics exactly because they didn't like the country's direction. Getting Barry the nomination had trained them in political grunt work. Soon enough they would be learning strategy, and more citizens would join the cause as America seemed less and less like the country they'd always known. Half a century later, it's clear they didn't win everything they wanted. But they did a lot more winning than the other side.