What Will Michael Wolff Do When Rupert Murdoch Retires?

There’s always The New York Times to kick around, but it won’t be as fun. 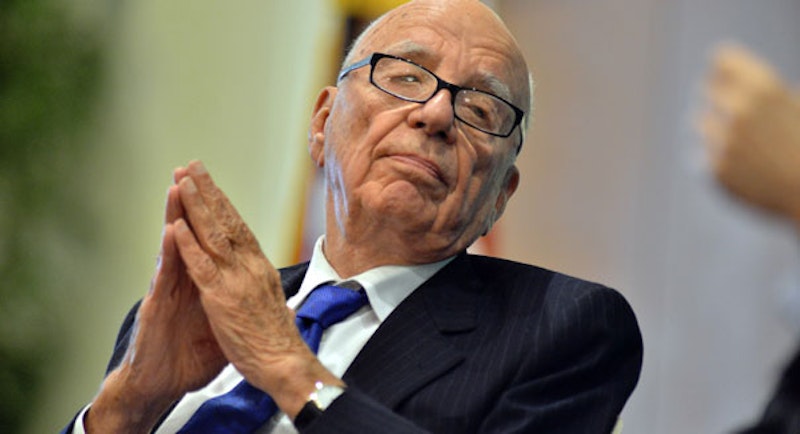 Iconoclastic journalist and author Michael Wolff undoubtedly rues the day when Rupert Murdoch, who turns 82 in March, is unable to conduct business in the frenetic fashion that’s defined his professional life. Murdoch’s been the subject of countless books and thousands upon thousands of articles over the years—mostly negative—but it’s Wolff who can rightly claim he’s Top Dog when it comes to chronicling the machinations of a media entrepreneur who’s had no equal in energy, audacity and hubris since at least the mid-1970s. Sure, when Murdoch passes on his Byzantine company News Corp. either to family members, or, given the well-publicized weaknesses of his natural heirs, other loyalists, Wolff won’t surrender his beat. But it won’t be the same and you sense that he knows that.

On Feb. 25, in The Guardian, Wolff gleefully took the recent announcement that The New York Times Co. is once again trying to sell its white elephant Boston Globe, purchased in 1993 for an even-then eye-popping $1.1 billion, to prick Times publisher Arthur Sulzberger Jr. (another frequent go-to subject for Wolff) to speculate that Murdoch could be the only conceivable buyer. Wolff concludes his column by writing, “The price will have to be so low that Rupert might make money on the deal, with the Globe screwing Arthur again.”

It’s a fabulous storyline—the persistent antipathy between Murdoch and Sulzberger—not only for the horror a News Corp. purchase of the Globe would cause the remaining high-brow New Englanders who consider their broadsheet a Boston jewel, but also the dreadful defeat for those who still care about such matters within the widespread Sulzberger clan. It’s true that the conflict between the two companies is, if not exactly quaint, more reminiscent of a Downton Abbey sub-plot than anything that resembles the modern world, and surely won’t engage almost anyone under the age of 35. But for those Americans who grew up reading newspapers, specifically The Times, Murdoch sticking it to 62-year-old Sulzberger would be a fascinating (or unfathomable, depending on your dedication to the onetime, in Wolff’s words, “Cadillac of newspaper companies”) twist. Not as satisfying as closing the chapter on who killed JFK, but nonetheless quite entertaining.

In an email, Wolff told me that in his opinion the Times would have to offer Murdoch the Globe for less than $100 million to make a deal—granted, as in the past, a number of local buyers have been mentioned—and the tsouris for Sulzberger and allies would be profound. Obviously, the next question that media observers would cluck about is when/if News Corp., for the hell of it, makes a premium bid on The Times itself, one not as bloated as Murdoch’s purchase of Dow Jones Co. several years ago, but a sum that Sulzberger family members (aside from Junior) would rub their hands at, being able to cash out when there’s still cash to grab at.

I’m not saying it’ll come to that, much as I’d relish the irony factor, for some noble young tech billionaire, like Mark Zuckerberg, might find owning The Times Co. a useful (and perhaps, with drastic business strategy shifts, even profitable) trophy, but Murdoch’s risen from the media grave before and it’s likely this a coda that’d delight the octogenarian.

Besides, as I wrote recently, not only has The Times relinquished its self-aggrandizing title as “The Paper of Record,” its future with current ownership—never mind the happy talk about re-branding as a “global news company” by shedding its non-Times properties—is bleak.

I was reminded of the Times’ clogged arteries on Tuesday morning upon reading over-the-hill columnist David Brooks’ op-ed about the sequester in which he apologized for his “unfair” comments about President Obama’s economic strategy on Feb. 22. Brooks is now of the mind that Obama doesn’t simply want to raise taxes on the rich but in fact has some real ideas on cutting spending. Naturally, I smell some pressure exerted on Brooks to change his tune—whether from his boss, the White House or Beltway colleagues—but it was pretty embarrassing. The Times slide continues—every week, it seems, a “name” journalist leaves the paper—and if you believe the company’s fortunes can be reversed and glory restored, well, that’s like betting a grand that the Seattle Mariners will win the World Series this year. Not inconceivable, but not likely.